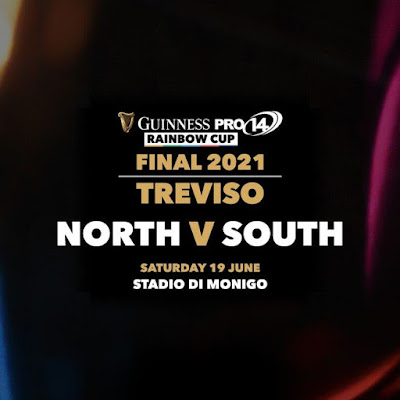 Although the biggest talking point from Leinster's last outing in the Rainbow Cup against Ulster was the challenge by Robbie Henshaw on Robert Balacoune, the was another incident right at the very end that was worth harping on.

The confusion was ended by Mike Adamson telling Leinster skipper Luke McGrath that he couldn't use his "Captain's Challange" based on information relayed to the pitch by the team doctor, but what was interesting was how the confusion was created.

Leinster were leading 21-17 at the time and the possession was at midfield so you'd think the last thing we'd want was for play to go on since it would leave open the possibility of our visitors nicking a try to win the match.

But since our 21 points had come from three converted tries, that meant we needed one more for the bonus point which means that if our captain and backroom staff were willing to go to such lengths to try and go for it, then we're clearly motivated to get to the Rainbow Cup final, which is the kind of motivation every fan wants to see from their team no matter how succesful they've been.

So with us being off this weekend as the competition resumes, I thought I'd get out the calculator and work out exactly what needs to happen for us to reach the decider in Treviso against the winner of the South African group.

Here's how the table looks going into the weekend, this was taken from RTÉ.ie.  As you can see the 0-0 draw for the cancelled Ulster/Scarlets fixture has been included.

UPDATE : All the matches from the weekend of May 28/29 have been included. 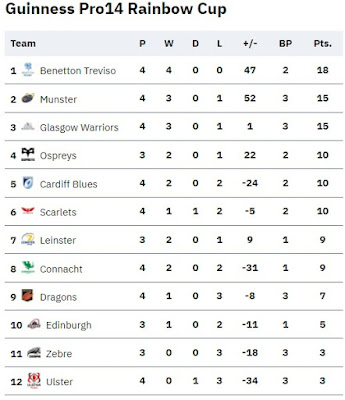 So here's the list of all the things that need to happen.  Just to be very clear, I'm not saying we're likely to get this perfect storm, but at least it gives me something to write about!!!

1) GET MAXIMUM POINTS FROM GLASGOW & DRAGONS
This is the most important one obviously because if we drop even a single point we're done.  But we also can't afford to rest on our laurels when the BP is in the bag - if we want to compete for this final we'll need all the points difference we can get.  Basically every penalty needs to be put to the corner if we really want to go for it.
One thing about this point however...since we have a bye this weekend there's nothing we can do about it until we go to Glasgow next Friday so in the meantime we'll have to watch and hope maybe some of the points below can get taken off the list in the matches from this round.  The Ulster/Scarlets cancellation doesn't affect anything when it comes to us reaching the final.
2) BENETTON GET 4 (MAYBE 5) PTS OR LESS FROM 2 MATCHES
Going by the table Benetton are in "pole position" to reach the final, which would be an amazing achievement even without the fact that it is to be on their home turf, but many would put an asterisk against that considering two of their three wins were against Zebre.
For my part, I may have only seen one of their matches (that most recent one against their fellow Italians) but still I was impressed enough to feel they should be expected to compete for the two wins they require against Connacht and Ospreys to make it.
If they get exactly 5 points from the two matches we can technically draw level with them but we'd need to close a points difference gap of 30 to do it; I wouldn't rule that out entirely but it's more realistic so say that if they get 4 or less and we get maximum then we'll leap frog them.
This point will probably put most Leinster fans in a simple enough "either/or" scenario, first off we'd hope they slip up in at least one match to give us a chance to reach the final but if they do get the two wins, then we'd be happy to hop on the bandwagon bus to get behind them for the final.
While I'm on Benetton be sure to check out this week's podcast where I spoke to the author of The Italian Rugby Blog about how the game is going there.
UPDATE - Benetton weren't interested in the bonus point as they beat Connacht so that leaves the door open a tiny bit for Leinster although we'd require the Ospreys to do us a big favour.
3) MUNSTER GET 8 3 PTS OR LESS FROM 2 MATCHES FINAL MATCH*
A bit like with Benetton, technically we can catch our southern cousins if they get 9 points and we get 10, but we're so far behind on pts difference that it would take a phenomenal pair of winning margins for us to close that gap.  So with all due respect to Benetton, I actually think this could well be the point most likely not to disappear from the list since I can't see Munster failing to get at least 9 against Cardiff and Zebre.
UPDATE - Cardiff did better than I expected at Thomond Park but the net result was still a maximum-point haul for Munster so we'll need Zebre to do us a massive favour next week.
4) OSPREYS GET 9 PTS OR LESS FROM 2 MATCHES
We're "only" 13 behind them in the points difference column so they should be easier to catch, again assuming we get maximum points from our matches.  They don't exactly have an easy schedule but for their first match they go to the Sportsground where they have already won this season, then they host Benetton so you can be sure there's a lot of peskiness left in these birds.
UPDATE - Although those pesky birds didn't play this weekend, they could hold the key for Leinster.  On top of us getting two wins and Munster dropping points in Parma, we also require the Welsh region to both fail to win at Connacht next weekend AND deny Benetton hosting their own historic final with victory by 8 points or more.  Not looking likely, is it?
5) GLASGOW GET 9 PTS OR LESS FROM 2 MATCHES
This one is similar to the Ospreys point above except for the fact that we have some control over this ourselves.  If we fulfill point number 1, then this one also disappears, though it can also go this weekend with some help from the Dragons.
UPDATE - Since Glasgow got maximum points against the Dragons, there's no other way Leinster can overtake them other than beating them in Scotstoun next Friday so that would be achieved by point number 1 and I can remove this one.
6) STAY AHEAD OF CARDIFF AND CONNACHT*
Both are level with us on 9 points but in the points difference column both are around 30 points behind us so this one should be safe enough, again assuming we acheive point number 1.
UPDATE - Both Cardiff & Connacht lost this weekend so this point has gone.
OUR COVERAGE THIS WEEKEND
So there you have it.  Since I enjoyed doing my mini-writeups last Monday I'll do another one after this weekend's matches, covering Munster v Cardiff, Benetton v Connacht and Dragons v Glasgow, all of which will influence Leinster's chances as laid out above.
I also plan to celebrate the return of Top 14 to our screens by scribbling on probably La Rochelle v Pau and if I have time I'd also like to feature a match from Major League Rugby and with the top team in each conference squaring off (LA v Atlanta), this would be a good time to do it.
Be sure to check back for our latest content throughout, and thanks as always for staying with me all the way down to here.  JLP
at May 28, 2021