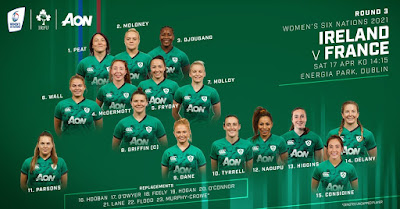 "If it’s in-depth coverage of the women’s game online that you seek, I would point you in the direction of websites like ScrumQueens or Facebook pages like Show Women’s Rugby Live on TV.
We’d love to be able to devote more time here at HarpinOnRugby but over the course of the long season, time is generally the one thing we don’t have when it comes to giving the women’s game the coverage it deserves."
Back in 2014 I took a Sunday trek out to Malahide to watch the Irish Women play Wales in a World Cup warmup and I used the occasion to pen my first ever writeup on the women’s game for these pages.  As you can see by my opening paragraphs back then, I was determined to point out that I was more of a fan offering to share his experience rather than an supposed expert passing judgement.
Well it’s almost seven years later and despite all my best intentions to expand the website’s focus beyond that of the men’s teams for both Leinster & Ireland, unfortunately my time has been just as limited.  I still strongly advise you bookmark the great sites linked above for more regular coverage as both are still going stronger than ever.
Of course it’s not that I haven’t been able to watch the girls in green at all mind you; I have done other writeups since then like that amazing win over New Zealand (achieved before the men, don’t let anyone forget) as well as other matches at that World Cup as well as the 2017 one that was staged here, and I’ve also gone to Six Nations matches at Energia Park so it’s not like I haven’t shown my support over the years.
But we can always do more, and this particular weekend there are absolutely no excuses for Irish rugby fans to do anything but get fully behind Ciara Griffin & the squad as they take on France in what is effectively a Six Nations semifinal in Donnybrook.  Here at Harpin Manor we're planning to give it the full treatment with preview, shared opinions from fans after the full-time whistle and of course a full writeup on Monday.
Obviously since victory over the Black Ferns, Ireland won the Six Nations title in 2015 but from those dizzy heights things started to go in the wrong direction.  Hosting the World Cup in 2017 was not the boon for the game on these shores we had hoped and since then a lot of changes at player and coaching level haven’t helped.  Plus there was the increased strength of the French & English programmes going full time professional, and, oh yeah, that little thing called COVID19.   But if you haven’t had the chance to watch the girls play Wales last weekend, I suggest you check out the video below.
Literally from start to finish they put in an amazing performance with heroes all over the park - Beibhinn Parsons on the wing powered over for a couple of tries and could have had more (Great quote in commentary from Fiona Coughlan - “Some say she’s a superstar in the making but this superstar is made”),  Dorothy Wall powering over the gainline again and again, Eimear Considine joining the line from full back at just the right time, Aoife McDermott & Nichola Fryday dominating at the lineout, and Player of the Match Hannah Tyrell pulling the strings throughout.
Begrudgers might point to stories of problems in the Welsh camp but for a team than not only had to wait a year to play together but also sat out an extra weekend to their opponents because of this year’s competition format, there was no rust to be seen from our display and I defy anyone to suggest it wouldn’t still have been a comfortable win if the Welsh, who’s entire squad play in the Premiership don’t forget, were on their top form.  In fact if anything the home side did well in the second half to keep us out so long from adding to our 31-0 lead at the break.
Head coach Adam Griggs was so impressed with the performance that he named an unchanged side for Saturday and since the French beat Wales by a similar score in round 1, this promises to be quite a battle for the right to meet England in the final next weekend.
Like I said I’m not claiming to be an expert by doing this preview - my overall goal is to persuade as many of my readers to support and watch the match as I can - so when it comes to analysing the French I will leave you in the capable hands of the Irish Womens Rugby Supporters Club account on twitter….everything you need to know is in this thread...

So what should we expect from the French this weekend?

We know we will face a very different side to the Welsh we saw last weekend, but what aspects of the game will be different?

The bookies are going for a French win by 7 points.  If anything that should make the Irish more determined to get a result.  Obviously I’m going to back us to do it - having seen both teams face the same Welsh outfit I see no reason why we couldn’t make the most of home advantage even without the supporters.
And of course since we unfortunately can’t be there, again I’ll remind you that we need to do everything within our power to let them know we’re cheering for them.  Use twitter hashtags like #ShoulderToShoulder #IrishRugby & #IREvFRA from now until full time and get them trending. Make sure everyone you normally talk to about rugby will also be watching.  After the whistle blows, whatever the result, share messages of support for the girls and if you have any time left over, hop on our Facebook page and leave your thoughts there.
I’m really looking forward to this one, hope you can watch with me.  JLP