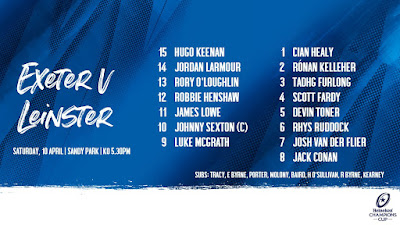 Saracens might not have a part to play on the pitch in European rugby these days, but it’s hard to deny that when it comes to Leinster’s quest for a fifth star, they’re definitely lurking in the background.

For as much as we’d like to forget the dates of May 11, 2019 and September 20, 2020, they clearly stand out against the run of victories and trophies the boys in blue have managed to string together over the past few seasons.  Part of the preparation for this massive quarterfinal has to be turning those disappointments into motivation.

The next hurdle will be somehow turning last weekend’s late cancellation of the Toulon match into a positive.  Is it an advantage for the squad to have had extra rest or would a battle against the Eben Etzebeths and Charles Ollivons of this world have been better for us? Only 80 minutes of time in Sandy Park will tell.

Oh, and then there’s the small, trivial matter that we happen to be in a quarterfinal against the reigning champions for the second season in a row, and while the Chiefs may not be having things all their own way in the Premiership this season, their win over Lyon last week looked like they’re ready willing and able to defend their crown.

But impressive as their form and lineup may be, it will be on our side of the ledger where this match could well be decided.  I’m not sure if we need to read too much into the Fardy/Baird swap from the previous week’s 23 other than perhaps a shift in impact focus - this seems to be the lineup we’ve settled on for big knockout matches and taking everything into account it’s a damn good one.

The biggest task surely must fall to Rory O’Loughlin at 13.  Obviously it would be difficult for anyone to step into Garry Ringrose’s boots but we’ve had to get creative with this position on more than one occasion this season and it has worked out ok, although with respect to all we have faced, Henry Slade will pose quite the challenge.

Assuming our set pieces will be functioning at the right levels, when it comes to our pack the biggest task will be staying on the right side of Monsieur Reynal.  Exeter showed against Lyon what they’ve always shown over the years - concede a penalty around the halfway line and it can become seven points in a matter of minutes.  Plus, if you try too hard to keep them out on your own try line, the cards may follow making things worse.

What that could mean is that our best course of action, unattractive as it may be, would be to play more of a territory game.  Naturally the kicking would have to be accurate with the likes of Stuart Hogg more than able to take advantage of mistakes, but while we do like to play our own style, I reckon the lessons learned from those two disastrous defeats I mentioned at the start could mean we have to allow for our opponents’ strengths as well in big clashes like this one.

Then there’s the James Lowe factor.  After all he went through during the Six Nations, his personality suggests he’ll want to use this occasion to prove a point.  And while he definitely has the talent to do it, I hope he’ll be able to pick his moment and stay within the remit of the day.

It really is a tough match to call on paper, isn’t it.  I have to say that while I’m not surprised the bookies have only two points in the winning margin, surely this has to be the first time a reigning champion has been officially an underdog at home in Europe?

Well this Leinster fan is definitely going to stick with his team when it comes to a prediction.  While Sarries might be something of an Everest to us in recent times, it could also be said we have the same affect on many other teams around the continent, with Exeter definitely one of them.

In fact their coach Rob Baxter referenced in a press conference our first ever meeting back in 2012 - I remember it well (ah...watching a match live from the stands...sigh).  There were only 3 points in it that day, it could have easily gone the other way, and as we all know his side have gone from strength to strength since then.

I reckon the margin will be similar, with optimism helping me to a winning margin of 4-6 points.  Like I said we’ll need accuracy and luck in plentiful amounts, but we’ve seen more than enough evidence that this is a squad that can be well prepared to provide the former and make the most of the latter.

As always follow me on twitter during the course of the match and when the full time whistle blows, head on over to the Facebook page and leave your thoughts.  For the podcast during the week I’ll be assembling a panel of Leinster fans to assess the 2020/21 season so far, hopefully we’ll have a final four matchup to look forward to as well.

See you on the other side folks!  JLP

PS - Best of luck to the Irish women in their opening Six Nations match this evening. It's a real pain in the arse for Leinster fans in particular who want to give both sides their full support. I know "double screening" has been very much a thing especially during COVID times but these are two massive matches and I'm sure with a bit of thought they could have made better allowances in the schedule.

Also, ICYMI there's some bonus Leinster Rugby for us this weekend as the A team will be over in Galway to play the Connacht Eagles with the match live on YouTube from 12:45pm be sure to check it out.