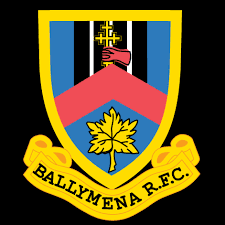 This week we visit Ulster and look at one of the standard-bearers for the sport of rugby there in Ballymena. Rugby has been played in the County Antrim town since the end of the 19th century but the club as we know it took off after the First World War and entered the Ulster Junior League for the 1923-24 season.
They began to find their feet and over the course of the next decade won two each of the Provincial Towns Cup and the Junior Cup. The club resurfaced after the Second World War and the links with Ballymena Academy School, which are still strong today, were evident when the headmaster of the school, WH Mol became club president and the club’s new facilities at the Showgrounds were provided by the school. Nowadays, the Showgrounds is the home of Ballymena United FC.
It wasn’t long before senior status was achieved in 1953 and they moved to their current home at Eaton Park two years later. These grounds were shared at the time with cricket, tennis and athletics and the former of these three are still an important part of the club to this day. On the pitch, success was a while in coming and even when the Senior Cup was won in 1963, it was only an interlude to another baron spell for the club’s trophy room.
During this period, however, two giants of Ulster, Ireland and world rugby donned the black shirt of Ballymena in Syd Miller and Willie-John McBride. Both were Lions on multiple occasions with the former going on to have tremendous success off the pitch too as a coach, manager and, later president of the IRFU and IRB. His contribution to world rugby in so many ways was immense. The latter is one of the greatest players to ever grace the oval ball game, captaining the famous 1974 Lions and donning the red jersey on an incredible five tours.
During the 70s, the club became a well-oiled machine with a head coach and squad system and the following decade was extremely successful following up their centenary year with league and cup doubles in 1988 and 1989. This meant that at the beginning of the All Ireland League, the club was placed in Division One and were very competitive, finishing in the top five in their first two seasons.
The club made a major coup in 1996 with the appointment of former Springbok player and coach Nelie Smith which led to another league and cup double in his first season. He was the first in a line of Southern Hemisphere coaches to grace Eaton Park as he was succeeded by countryman Andre Bester. He laid the foundations for Australian Tony D’Arcy who guided Ballymena to their first and – so far – only All Ireland league title in 2003. He was succeeded by two more Saffas in Steph Nel and Jacques Benade. Recently the club has taken a more local approach with current head coach Andrew Graham and his predecessor John Andrews both ex-Blacks players.
As I previously alluded to, Ballymena RFC has a rich history of producing players for the white of Ulster, green of Ireland and red of the Lions. From Frank Dinsmore who toured Canada with Ireland in 1899 through to more modern stars such as David Humphreys, Gary Longwell, Andrew Trimble and Chris Henry while not forgetting Millar, McBride and others throughout the years like Barton McCallum, Trevor Ringland and Philip Rainey. They all started in the black of Ballymena.
Relegation in 2019 followed by last year’s abandoned season and this year’s non-starter season means that when play resumes, the Eaton Park men will be in Division 2A. However, Graham presides over a young, local and exciting squad with the talent to start climbing the divisions.
For more information check out the Ballymena website here
Links to previous profiles...
Clontarf RFC, Dublin University, UCD, Lansdowne, Terenure,
St Mary's, Blackrock, Old Belvedere, Cork Con, Buccaneers
Mark Strange (@realmarkstrange) : I am a freelance sports writer who has been published in soccer, rugby and baseball. I am also an avid fan of ice hockey and just returned last year from a year living and working in Vancouver. I previously played and was PRO for Randalstown Rugby Club before a knee injury cut me down in my prime! I became a Leinster fan when I was younger due to a certain Felipe Contempomi and I am the only blue in a sea of white in Ulster.
*****
Want to see your own rugby opinions on the web?
Click "Write for us" in the sidebar to find out how.