Start your day with five eye-catching egg-chasing quotes & links from around the ruggersphere.
ICYMI click here for our weekly list
of upcoming rugby on Irish TV

“I was asked if I wanted to be part of it, and having Irish heritage which I'm very proud of, it was certainly something I was never going to turn down.”
Ex-Ireland prop Michael Bent ‘incredibly grateful’ as he announces retirement after nine years with Leinster
David Kelly - Irish Independent 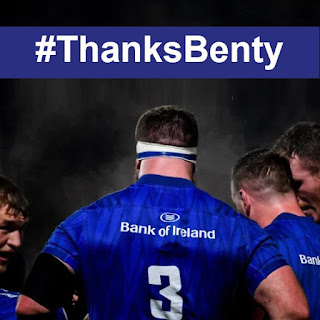 "We learned some valuable lessons last weekend and we now have the opportunity to rectify some of the areas that we need to show more accuracy"
Ireland make three changes for Italy visit
RTÉ Rugby
"...if Alun Wyn was captain I wouldn't bat an eyelid...But you don't want to put too much pressure on someone, particularly when they are 35, to make the Test team."
Former Lions Captain Backs Maro Itoje To Fill The Role In South Africa
Gary Connaughton - Balls.ie
The Brave Blossoms have not featured in a game since the home World Cup in 2019 where they reached the quarter-finals
Japan to play warm-up game ahead of clash against British and Irish Lions
Talking Rugby Union
"Say what you see, must be different tackle laws in the Championship, no card and no citing....."
Farrell makes another horrific tackle
SARugbyMag.co.za
Feel free to share any interesting links you spot yourself about t’internet by email, Twitter, Facebook, blog comment or carrier pigeon – whatever works for you. JLP
Note - views expressed in "Front Five" links do not necessarily reflect those of HarpinOnRugby
at April 23, 2021