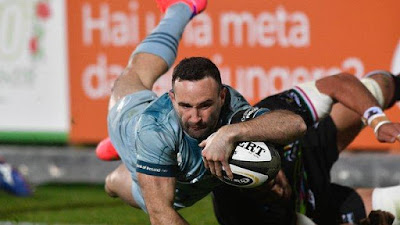 FROM START TO FINISH

Paul Smith Routine enough win and a great runout for some of the younger guys. Dave Kearney showing why he's still one of the best finishers in the game, Harry Byrne running the show, Scott Penny getting better and better every week, Dan Sheeran superb and Rory O'Loughlin also shone. Some downsides too, a lot of penalties given away, the scores concedesd were very soft too but at the end if the day its a 7 try BP on the road and a good way to start a weekend for a Leinster fan.

Martin Loughrey Too many points shipped. I felt that the ref. was very quick to give penalties against us though. He blew a couple of times for holding on within a spilt second of a player hitting the deck and also for crawling after the tackle when players were just turning to get the ball back. Full credit to Zebre they never gave in even when they were well beat. I like that although the throw in to their last line-out looked crooked they went on to score their last try. Maybe it was the back and forth in Italian from the officials that annoyed me but I did feel there was bias on the pitch. At the end of it, a BP win on the road is never a bad thing. Feeling put out after a result like that is a measure of how spoiled we are by our team!!

Really enjoyed tonight’s commentary on @eirSport - so nice to not have to listen to Toland’s ridiculously biased waffle.

Gav Heg So honestly can we keep all these youngsters? Like Sheehan and Kelleher are both very young and talented battling for the same jersey, both blue and green eventually, Surely they'd be tempted to move like carbery to get a starting spot?

Dan Sheehan looks every inch an international star in waiting. It's only Zebre, but that was some performance. If he tightens up his throw he'll be capped in no time. Him and Kelleher are game-changers in terms of their dynamism

Peter Tracey (reply to Gav Heg) we’ve managed to keep Furlong and Porter so hopefully they will stay and push each other on. Cronin looks to be gone at the end of season and Tracy will be there for another 2 or 3 seasons.

Another masterclass by Scott Penny today against Zebre. If there is a summer international tour then he has to be on the plane. #ZEBvLEI pic.twitter.com/mQpSoY5BC6

More defensive shortcomings in second half and credit to Zebre for playing to the end but job done all round. Impressed with how we were hitting the gainline and the finishing was sublime. #ZEBvLEI