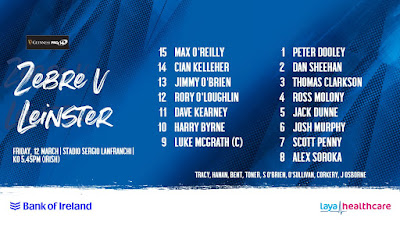 From last Saturday to the following Tuesday, Leinster’s fixture calendar took on a completely different look.

Going into last weekend, we knew we had a decent shot of reaching the Pro14 final but weren’t sure, and we also knew there was a home match awaiting us in the Champions Cup but our opposition was yet to be drawn from the hat.

Now we know that just seven days after Ireland wrap up their Six Nations campaign, our friends from the other end of the N7 have another crack at us, this time in a decider rather than a semifinal.  Then the following weekend, three-times European champs Toulon come to D4 and should we get past them, we could well face a tricky test in Sandy Park.

So while our second consecutive six-day turnaround is anything but ideal, there is plenty of motivation for the boys in blue over in Parma because regardless of what internationals will be available, we are definitely going to need a lot of those involved this evening.

There’s great continuity in the backline as it is identical to that which faced Ulster last weekend except for the first name of the out half.  It’s great to see Harry back getting game time and this will of course be a further opportunity to showcase his talents.

And he’s not the only promising youngster on display - Max O’Reilly also impressed at the Kingspan and Alex Soroka, who made his debut that night off the bench, gets his first start to become yet another addition to our back row options.

What’s that?  Not happy with our amount of back row options?  OK then - how about another one ready to make his debut off the bench?  And what if his name is Sean O’Brien?  We’re going to have to come up with a way to distinguish between them all since he’s the 4th to hit the pro ranks.

Speaking of debuts off the bench, there’s another one set to happen if Tim Corkery gets to play - I tell you what, it’s getting mighty depressing seeing all these dates of birth beginning with “2” but such is life now!!!  It certainly won’t be depressing for him to take his Leinster bow and I wish him and all the newbies all the best.

Overall it’s a mostly young team and in many ways it’s funny to see a lineup where people like Jimmy O’Brien and Scott Penny are practically veterans!  If they hold up the way they have since that blip against Connacht I reckon they’ll do fine against the Italians.

For their part, again they have their former blues Nagle and Kearney starting in their second row with the former as their captain.  This is their third home match in a row and although they fell to Glasgow last time out, they overcame the Dragons and kept the in-form Ospreys down to a 10-point defeat before that.

Still, you have to back Leinster to have a decent stab at matching, if not passing, the bookies’ 25-point winning margin.  There’s so much competition for places at the province the “meaninglessness” is hardly likely to matter so I’m going to back them to beat that spread, if not quite by the amount they did back in October.

Don’t forget the early kickoff time of 5:45pm, follow me on Twitter throughout the match and be sure to leave your thoughts on the Facebook page after the fulltime whistle - I’ll be sharing the best comments as part of my writeup.  JLP