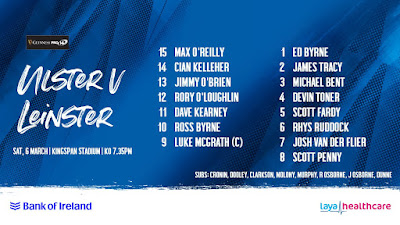 But that’s where the similarities end.  With Leinster having collected 6 more bonus points along the way, they lead Ulster by that many with just two matches left after Saturday’s clash at the Kingspan.  You could probably call that 7 points unless Dan McFarland’s men can also manage to haul back a gap in the “points difference” column of a whopping 85.

So that sets the scene.  Reaching the decider is quite the daunting task for the Ulstermen but all you need is one look at their squad for this match to know how much it means to them and we can be in no doubt that they’re going to give it everything they’ve got.

All of which means that how things go completely boils down to Leinster’s attitude.  We can afford to lose on the standings, but given what we’ve seen from them this season, can they afford to when it comes to the standards that have been set?  Especially with the draw for two knockout rounds of the Champions Cup set to take place on Tuesday?

(sidebar - with draws for both last 16 and quarterfinals taking place at the same time and the latter being “open”, I’m totally expecting Leinster and Munster being set to meet in the last 8 should both get through.  If that happens, remember where you heard it first.  If it doesn’t, I’ll be sure to delete this sidebar!)

Not for the first time when looking at a Leinster matchday 23 for the first time, the eyes are immediately drawn to the back row.  Whatever disappointment we may have had seeing Rhys Ruddock’s name being absent from Ireland team to face Italy, it would have been tripled had he not started here, and with van der Flier and last Sunday’s Player of the Match Scott Penny alongside him that’s quite the trio.

However...look across at the other lot.  Nick Timoney, Jordi Murphy and Marcell Coetzee.  Yowza.  There’s a battle and a half.  And more than likely it’s where the war will be won and lost.  Cannot wait!

With a super experienced second row of Messrs Toner and Fardy plus an all-in-form front row gives us an incredibly well-rounded pack considering we’re right smack in the middle of a Six Nations campaign.

Now to the backs - it’s a little different to what we’ve been used to, and when it comes to chopping and changing, lately we’ve been able to handle it after the warmup as well as during the match so I totally see this formation working well together.

Rory O’Loughlin played at 12 against Glasgow as if that’s where he had been training all week and having Jimmy O’Brien outside him gives us some very interesting options when we have the ball.  ROL can provide the crash, JOB the little kicks into space, and of course Ross Byrne has been knock to find both Cian Kelleher and Dave Kearney with his own boot on occasion.

Last line of defence will be Max O’Reilly.  After a shaky enough start against Connacht he has taken every opportunity given to him since and although I reckon the Ulstermen will be keen to test him out, he certainly seems to have the ability to do well.

Chances are this one is going to be close which means the benches will play a big part.  With both Harry Byrne and David Hawkshaw unavailable we’ve gone for another 6/2 split and if there are no injuries I’ll be interested to see how we use them.   Having Molony, Murphy and Dunne there, all of whom can play lock, means both Toner and Fardy can really go for it and as ever we will need our defensive systems to be as strong in the 80th minute as they are in the 1st.

Looking for a view from Ulster’s side of things I spoke to Ian Frizzell during the week on the podcast and he reckoned they have suffered from a lack of ability to go on and secure the bonus point after keeping pace with Leinster before Christmas.  This might be borne out by the facts on the Conference A table, but I have to assume all that will go out the window on Saturday evening and their very strong 23 will be determined to get into the game as early as possible.  Having so many former boys in blue around certainly won’t hurt for motivation either.

So...how does it pan out?  Well the bookies have surprised me as they have Leinster winning by 4.  I certainly believe we can win and I do agree it will be close, but as much as I hate going against my team my official prediction is for a home win by 1-3 points although the longer they go without establishing a lead the harder it will be to get one.

One thing is for sure...both interpros this weekend have the potential to continue the high levels of entertainment they provided over the holiday period and like I said, with the Pro 14 final, European knockout rugby and the Six Nations still fresh in the minds for all four proud provinces, there’s a lot to look forward to.