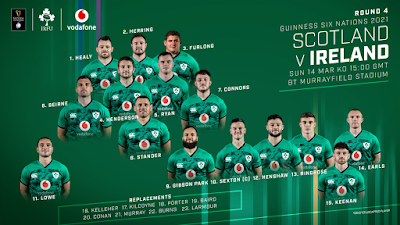 Can’t help feeling that this match is going to be another disappointment for a portion of Irish fans, but that doesn’t mean at all I reckon we’ve no chance of winning, in fact I’m predicting we will.

I’ve harped quite a bit during this campaign on how there is little Andy Farrell’s side can do to make up for the disappointment of defeats in our first two matches in the eyes of many, even if those were against the only two unbeaten nations left from the six (at the time of writing).

Certainly the two week gap either side of a routine thrashing of the Italians did very little to claw back any goodwill, and come to think of it, given our recent record against the Scots, I’m not sure a win in Murrayfield will either, especially if we play the way I think we will.

I mean, given the considerable counter attack threat provided by their starting back three of Hogg, Maitland and Van der Merwe (with more yet again in reserve with Graham) no matter how much sense it makes to avoid kicking broken play opportunities to them and trying to find space either up the middle or by winning penalties for lineout opportunities in their 22, even if that works we’ll be slated for not wowing everyone with a sizzling attack plan.

Of course I’d love to see us playing with that kind of rugby too, don’t get me wrong - in fact, if we’re going to persist with starting the likes of Gibson-Park and Lowe who are always looking to play in the moment, it does make sense to open things up.  But as I have said many times in recent weeks, I have a feeling this coaching staff had a specific plan with a specific set of players going into this tournament and after getting derailed so early in Cardiff they appear determined to show us it can work and if true, I for one can’t fault that.

Rob Herring starting at 2 is a sign that we are prioritising lineout accuracy, and with Messrs Gray and Cummings likely to put us under set piece pressure, we’re going to need it.  I’d almost go as far to say that this is an area where the match could be won or lost.  If we can mix up our calling correctly and secure possession cleanly on the majority of our darts it will put us in pole position.

In the back line, like I said we’ve a decent back three ourselves, also with pace in reserve with Larmour, so I’m wondering if Townsend might have similar plans not to give them too many chances.  If our half backs are going to resort to the high ball it will have to be absolutely spot on, so I’m thinking we’ll be bringing it to the line a lot and maybe, just maybe, an offload or two could be on the table.

Defensively I’m hoping for discipline and organisation - with Finn Russell pulling the strings we’ll need to be ready for anything and our Henshaw/Ringrose axis will have their oft-touted Lions credentials tested to the full against Harris & Johnson.

Everything about this match suggests it’s going to be close.  It’s not the fact that the bookies only offer a 2 point spread in our favour which raises an eyebrow, it’s that they’re offering such long odds as 22/1 for the draw like they are for the other matches this weekend - I would definitely bring that in a bit.  But whatever the odds, it really does look as though the two benches are likely to play a significant role.

I find it interesting that Townsend has opted not to pick a recognised outhalf in reserve.  According to the Scottish Rugby Blog, should Russell be withdrawn then Hogg will slot in at 10 with Maitland or Jones to 15 and Graham to the wing.  So it looks like they’re counting on 80 minutes from their play maker, but that said, with all due respect to Billy Burns, so are we (could we expect Carbery back wearing green 22 as early as next weekend?).

During the week on the podcast I spoke to Edinburgh & Scotland fan Sandy Smith about how he saw his side lining up and he felt Townsend would be more likely to stick to his overall gameplan as opposed to tailoring one especially for us, which I reckon could be their undoing on Sunday.

So it’s bound to be a fascinating match from start to finish, but again I have to say those expecting free flowing attacking rugby are likely to be disappointed.  When it comes to my prediction, while it has been a championship where since incidents have defined the result and this could be no exception, I still feel we’ll do enough to prevail by 3-5pts.  Unfortunately I also predict that won’t be enough for some who will be likely to say “well we’d better not play like that against England” or something similar.

Hopefully I’m only correct when it comes to the result.  These two matches just six days apart are likely to be the only ones the coaches have left for us to judge them on until the autumn and if so, it has been a terrible set of cards fate has dealt them since they took over.

As always be sure to follow me on Twitter for comments throughout the match then head on over to the Facebook page after the fulltime whistle to leave your thoughts. JLP