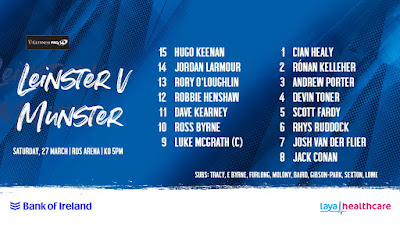 Trivia question for you, no googling allowed….which two players starting at the RDS on Saturday wore the same starting jerseys at Thomond Park back in May 2011?  Scroll to the end for the answer.

And those memories of Munster’s last major trophy success will be one of many things spurring them one from minute 1 to 80...but I let one of their biggest fans Michelle talk about the view from their end of the N7 in the interest of fairness, and also in the interest of my being allowed to be totally biased in my own preview!!!  Check out the podcast in the player below or even better, why not subscribe for further episodes - we’ve an interesting one coming up looking at the anatomy of a citing commissioner's hearing.

Anyway, on Leinster - well it was always going to be about how the players were fed back into the team from the Six Nations, wasn’t it.  To be honest I’m surprised to see this many actually playing especially with knockout European rugby a week later, but I have definitely no complaints as it gives what is a major final in its own right the respect it deserves.

The challenge for Leo & co was always going to be find the balance between rewarding those who helped get us to this final while still adding in all the test talent, and for the most part they have managed it.  Luke McGrath is most certainly a worthy captain for the day and responded to exclusion from test level in exactly the right way with a string of fine performances.

I also didn’t bat an eyelid when I saw Rory O’Loughlin tapped to fill Garry Ringrose’s role at 13.  We could have gone many different ways with this selection, like copying what Ireland did against England and move Robbie to outside and put in a playmaker at 12 but knowing we’d be up against de Allende & Farrell it was better to go with the strength and there promises to be quite the battle in the centre.

Then there’s Dave Kearney.  In the form of his life and scoring tries for fun...there may not be too many chances for him this time but if they come there’s no better man to make the most of them.

Of course there have to be a good few from the 16-match regular season that are unlucky to miss out, like Scott Penny who also found the try line a lot, as well Michael Bent who has become a real Mr Dependable.

There's a middle category of sorts between the Pro14 and test squads which of course features Rhys Ruddock, and the “Leinster Back Row One-Arm Bandit” has thrown up quite a trio this week as he is joined by the same 7 and 8 that just helped demolish the English.

It’s really difficult to find any technical aspect of the game where one team will have the edge in this one.  Scrum, lineouts (btw special congrats to Big Dev for breaking the record number of Leinster appearances), restart exits, ball carrying, even discipline all fall under that old cliché of “fine margins”.  What could decide it is that other worn-out saying - “passion”.

We know Leinster have been able to build their success on an almost religious adherence to not only specific tactics, but also an insistence on high standards when it comes to execution.  Since we know that Munster have so much to play for besides the actual rivalry, we need to be sure that we’re ready to meet them head on in those opening minutes because if we’re not careful they could knock us off our game.

But if, as is very likely, these two great sides manage to cancel each other out for the opening hour or so, then we must turn to the benches and what a set of names we find there.  Obviously the name Sexton stands out but there’s also Furlong, Baird and a certain Mr Lowe who might feel he wants to make a statement.

Also as I say myself in the podcast, in a tight cup rugby match like this one you can’t forget the potential influence of the officials, especially when you’re bound to have two teams which are bound to remain high in the tackle which can always lead to trouble.

Overall my view when it comes to a prediction is that the 6 point Leinster spread offered by the bookies is a shade high.  Munster have a host of match winners and while it’s very possible that either team can pull away if given the opportunity, the chances are that this will stay tighter than a camel’s arse in a sandstorm, as the saying goes (if that is a saying?).

But as much as pretty much everyone outside the 12 counties and probably outside the four provinces as well will be cheering for a Munster win, how could I do anything but back the boys in blue to lift title number 8, if only by 3-5 points.

So here’s to a classic final to live up to the billing, to the match being decided by rugby talent not referee sanction and also, of course, to no injuries for either side ahead of Europe the following weekend.

As always follow me on Twitter throughout the match and once the full time whistle blows head over to the Facebook page to leave your thoughts.  JLP