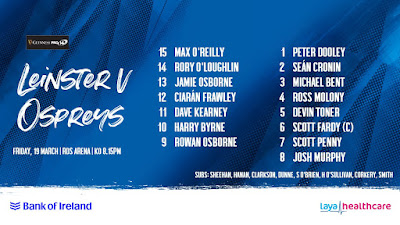 Before I start harping on tonight’s match, ICYMI check out this brief post from during the week where an eagle-eyed Leinster megafan spotted a twist at the end of our match in Parma against Zebre which helped explain our concession of two late tries.

I know there’s many who will think that’s a trivial point to make, but for me anyway it’s a very important distinction.  This season’s Pro14 campaign has been all about bringing on the next generation of Leinster players like Harry Byrne, Ciaran Frawley, Scott Penny andJimmy O’Brien as well as giving debuts to the next one again after them like Max O’Reilly, Jamie Osborne, Alex Soroka and Sean O’Brien 4.0.

And one of the stand-out features of our performances this season from where I’m watching has been the way we have defended in the closing stages, usually with the full complement of “finishers” on the park, so Miriam’s discovery goes a long way to explain those two late scores.

Tonight at the RDS we have one final chance to see this group of players in action, at least under the banner of this particular competition - hopefully we’ll get more details about the Rainbow Cup very soon.

But with the final against Munster just 8 days away and just 7 after Ireland’s Six Nations finale (not to mention the return of European action shortly after that), the chances are a lot of these players are going to be needed to make up our 23 anyway so there’s plenty of incentive for players to impress, and I don’t just mean the youngsters either.

For all I have said about the youth in our lineup, our front row tonight is an experienced one to say the least in Dooley, Cronin & Bent.  At hooker it’s particularly interesting because with Kelleher coming down from the test set up, Sheehan scoring tries for fun and Tracy also well in the mix, a good outing from “Nugget” will make selection over the coming weeks all the more difficult.

In the second row there’s plenty of lineout prowess in Ross Molony and Big Dev, the latter of whom is equalling Darce’s record of caps - some achievement!  And it’s definitely one of our beefier back rows with the two Scotts Fardy & Penny lining up with Josh Murphy.

When it comes to the backline it’s great to see Ciarán Frawley back fit again although unfortunately the creative trio he formed with Harry Byrne and Jimmy O’Brien is once again denied us as the former is injured.

And with Jamie Osborne given another chance to start it means Rory O’Loughlin, man of the match in Parma at 13, has to move out to the wing with Dave Kearney, another in fine try-scoring form, on the opposite side.  With Max O’Reilly and his unique ball carrying style at full back there’s plenty of attacking options for us tonight.

Giving this is arguably one of the most inexperienced benches we have named in a while, that thing about us finishing well without the ball is likely to be put to the test but on previous evidence I’d expect them to do well.

When it comes to our guests, well I was all set to wax lyrical about Rhys Webb’s form for the Ospreys during their recent run of results; in actual fact he’s been named more than once by guests on the podcast as a potential 9 for the Lions.  So of course he had to go and get injured - a terrible blow for him and his club.

So with all Welsh eyes on their Grand Slam tilt in Paris the following evening and Stephen Myler also unavailable, despite the fact that Toby Booth has them playing a much better brand of rugby since we went to Swansea last November, you have to assume our reserves go much deeper than theirs especially with us having what little home advantage there is these days.

Not for the first time this season my prediction is for us to beat the bookies’ spread.  They have given us 24 points which for me is more of a challenge to the bench than it is the starters, but like I say I have to back them to do it so I’ll go with 28-30 and see if they can get it done.  Here’s to a decent win for the boys in blue to help spur on the boys in green.

As always follow me on Twitter throughout the match and then head on over to the Facebook page to leave your thoughts after the full time whistle.  JLP