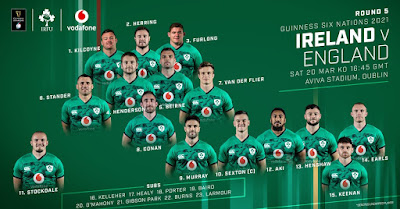 After a mostly negative writeup about what happened in Murrayfield, something that regular readers will know is unlike me as I usually give out about fans who complain after a triumph, I probably should make a point of seeing our pint glasses as half full going into this crucial decider.

I mean even though neither of us can win the title, this match is definitely crucial.  Every season we’re reminded of how important a top three finish is for Ireland and in all probability the victors at the Aviva are going to achieve that.

But while I can definitely see us winning, there are still a lot of factors going against us, especially when you consider the amount of changes from last week. Many were enforced by injury I know, and a lot of the replacements are more than capable, but for me it’s more the multiple shifts in position that concern me - Beirne from 6 to 5, Stander 8 to 6, Henshaw 12 to 13; for me you want more continuity from weeks 4 to 5 of this tournament, not less.

Speaking of CJ, a word about his big news during the week.  I understand there were one or two eejits saying stuff on social media but that is hardly a surprise no matter who the player is.  The response was overwhelmingly supportive from what I could see and I of course wish him all the best for his future, and hopefully he’ll go out with a bang wearing green (maybe not so much wearing red!!! 😉).

So let’s look at the changes.  No complaints about Kilcoyne over Healy; I have said many times how much I think Killer is the embodiment of the argument against switching Andrew Porter to loose head.

When it comes to replacing Will Connors, I have to say I was surprised seeing Josh van der Flier returned to the starting lineup with Peter O’Mahony available.  Of course Josh is by far the more “natural 7” but I totally expected Pete to return; in fact maybe it’s Conan’s presence that’s more surprising as our back row could have been POM/JVDF/CJS.  Great for Jack all the same and he’s well able to punch holes in that English defence.

In the backs, well after all that has been said about James Lowe defensively I have to say it is quite the gamble to replace him with Stockdale, although that said his shortcomings were more at full back and the Ulster man’s presence still gives us a big left boot for exit clearances.

When it comes to Gibson-Park I reckon he could be the most unfortunate to be dropped, although when I say he has done “all that has been asked of him”, it comes with a caveat in that the amount of box-kicking that was asked of him means it makes more sense to start with a fully fit Conor Murray so we should see an improvement in this area on Saturday.

The centre battle will be crucial.  Farrell and Daly haven’t exactly been setting the world alight in this competition so far but we’d expect them to improve week on week and I would have loved to see them face the Henshaw/Ringrose axis.  That said, with Robbie in the form of his life it probably doesn’t matter where he plays and he knows Bundee’s game just as well so we should be fine.

It goes without saying that a lot depends on how we front up in the forwards.  During the week I spoke to English fan Debbie Knight on the podcast about their chances and she said once the likes of Maro Itoje can keep their penalty count down they should do well.

For our part we have to get in amongst them especially at lineout time (one of our best areas against the Scots - more of the same please Paulie!!!) and the hope will be that victory over France last weekend will have given them the kind of hubris which has often led to their undoing during the Eddie Jones regime.

I certainly can’t blame the bookies for making our visitors 4 point favourites, but with it being St Patrick’s Day week as well as my birthday weekend, I’m going to back the boys in green to upset those odds and turn the margin the other way.  We definitely can do it once we are able to keep the performance levels up when things aren’t completely under our own control.

So as always follow me on Twitter throughout the match and then head on over to the Facebook page to leave your thoughts after the full time whistle.  JLP