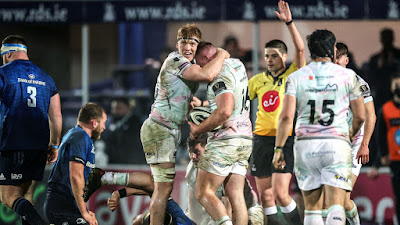 #LEIvOSP fair play to @Boothy6 and the Ospreys..grit n determination galore there in 2nd half.

Gerald Williamson Lack of experience went against Leinster in the second half plus the yellow card added by the Ospreys commitment to win decided the end result.

Watching the Ospreys being competitive is giving me PTSD to the times when they would come to the RDS just to collect trophies. 😳 #LEIvOSP

Conor Cronin Disappointing to finish the regular season by giving up a 16 point lead and losing. The game meant more to the ospreys chasing European rugby. Lots of learning for young lads who are chasing contracts, these games will stand to them.

16 point lead at HT, fail to get any score in the second half and lose 19-24. Credit to Ospreys for their hunger to come back, our bogey team once again. #LEIvOSP

Paul Smith Could see it coming. Fair play to Ospreys, they probably deserved the win in the end. The yellow card was harsh for me, and throwing young players on and playing others way out of position caught us out. At the end of the day, the result is immaterial for anything other than pride and at times uou learn more in defeat than facile victories so take ir, move on and fix it for next week when it matters.

Congratulations @ospreys big shift from all, thought the bench were quality. Haven’t seen much of Garyn Phillips but very impressive on the loose-head. pic.twitter.com/AnGoLnUJjy

Noel Hewson Fair play to the Ospreys they kept going and took their chances after the yellow card. Lots of learnings for the kids and some solid performances to be built on. The biggest part of the season lies ahead.

Massive shout out to @Boothy6 and the @ospreys boys winning away at Leinster! Some win mate, just a shame you can’t enjoy a few Guinness and Blackcurrants on a big night out in Dublin!

Full credit to Ospreys in that final quarter they clearly wanted it more. Lots of chopping and changing in our lineup throughout but we made too many errors and got punished. Only benefit might be a kick up the arse before the knockout rugby to come. #LEIvOSP