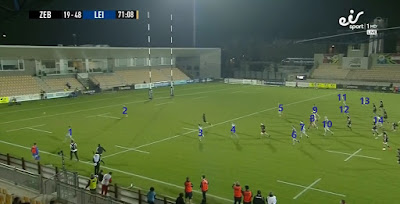 Now confirmed by Marcus Ó Buachalla - we’d used all our subs so had to play last 10 minutes with 14 players. I feel a bit better now about us conceding those two late tries.

It's not often we run such "Balls.ie-style" headlines here at Harpin Manor but I wasn't really sure how else to describe what this unique article is about!

With Leinster and Ireland playing pretty much every weekend from the start of a season to its end, and as often been the case lately both playing on the same weekend, each 80 minutes can be quickly forgotten as we look ahead to the next one.  And with all due respect to our friends over at Zebre rugby, our win last Friday in Parma definitely wasn't destined to last long in the memory banks.

But the one little wrinkle we had with that match, namely our concession of two late tries in the final ten minutes making the final scoreline a lot more respectable for our hosts, has managed to get itself ironed out by Miriam Collins on Twitter.

Miriam describes herself in her bio as a "Leinster Rugby MEGA fan" and if you have followed her posts over the years you certainly wouldn't argue.  One could almost say the levels of detail she provides during matches are enough to put someone trying to run a Leinster fan site to shame!!!  Like this one from during that same match on Friday...

Welcome to the #BigBoysTable new Sean O’Brien#Player1297
The 12th debut this season, 63rd new cap given by Leo and the 56th player to rock the blue this season

Well on Monday evening Miriam drew my attention to something else she spotted in those closing stages.  Shortly before the screengrab you see above, Cian Kelleher went off for what has since been confirmed as a hamstring injury.  As it turns out, we had already used up all 8 of our substitutions which meant we had to play out the final 10 minutes a man down.

Obviously in the grand scheme of things it doesn't matter all that much - Leinster still got another BP win and our place in the Pro14 final was assured anyway (and what's more as I'm typing this the news of CJ Stander's imminent retirement is breaking), but it is definitely a little detail that will be appreciated by fans who might have offered a slight "harrumph" at our defending towards the end, especially as this has been an area where our bench has done really well so far in this campaign.

So well done to Miriam and if you're not following her already be sure to rectify that now!!!  JLP