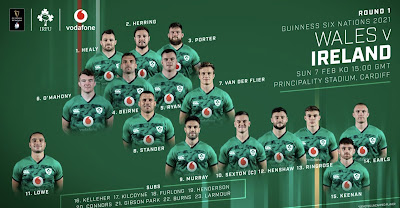 I won’t link to the “article” itself because that’s what they want, but one in WalesOnline yesterday summed up the kind of emotion that gets fired up amongst fans whenever these to great Celtic rugby nations go head to head.

To say it was disingenuous would be doing it a favour.  For one thing, there was no actual “journalism” involved - the information relayed by the piece was that former Welsh prop had reacted in the Irish Examiner to something said by Off The Ball’s Ger Gilroy.

All of this was under a headline reading “Adam Jones slams 'disrespectful' Irish pundits' claims Wales will be thrashed” which was not only very clickbaity but also factually inaccurate as only Gilroy’s view (which might need context as I wouldn’t put hyperbole past him) is mentioned (at least they didn’t go to the old reliable Franno for once).

My point is that the WO sub editor clearly knew that such a headline would enrage readers enough to give the website extra hits, and I’m sure an Irish equivalent would do exactly the same.  It has been a rivalry with a curious ‘yin yang’ balance during the professional era with Ireland enjoying much success at provincial level while Wales get more joy with their test team.

But now that I’ve mentioned the fact that things haven’t gone too well for Wayne Pivac’s men since he took over, that can be my starting point looking ahead to Sunday.  Does anyone really think they’re guaranteed to be “rubbish”?

You certainly can’t find too much fault with their lineup.  If anything defeats them in Cardiff on Sunday, it won’t be lack of experience and talent.  Factor in that they’ve been reading those articles too and you’d be mad to think they’ll be anything but fired up to do us over to kick off their campaign.

All of which means we also have to be fired up.  In my podcast during the week I spoke to Brandon Smith of the Welsh Rugby RoundUp Show who said Pivac has mostly selected a “safe” squad, with possibly Tomos Williams at 9 the one to look out for.

While our opponents are fighting a perception that their Grand Slam winning mojo from Gatland has all but gone, Andy Farrell is faced with a different set of demons.  “They’re just going to box kick their way into oblivion again aren’t they?”

I wish I could definitively say the answer is no, but I can’t.  That’s not to say I’m discouraged with the team, mind you, even the back row, about which many are complaining.  The way I see it, even if we didn’t have an insane amount of talent to choose from, you can’t just put your three favourite players at 6, 7 and 8 and expect it to gel with the way the rest of the team is to play.

For me Peter O’Mahony makes the team every time for his experience alone, with everything else he brings to the table a welcome bonus.  And I’m really not that pushed about what number is on his back either.  That said, against this cap-laden Welsh back row of Lydiate, Tipuric and Faletau, having JVDF and CJ in there makes a lot of sense - while they’re sniffing for snaffles (with the likes of Beirne and Porter not too shabby in support), POM can do all those hard to define yet crucial things that he does.

I’m always harping on the importance of lineouts when previewing both Leinster & Ireland but that’s only because they’re critical no matter what way we choose to play.  AWJ will of course see them as a way to disrupt us so all eyes will be on how Herring and Ryan can use Paulie’s pearls of wisdom to their full effect.  I’m often sympathetic to teams in Week 1 of the Six Nations as there is no “preseason” as such, but if we fail because of lineouts that will not reflect well at all.

Now to the backs.  Throwing in James Lowe to the starting lineup after an injury layoff is quite a brave call.  It would be even braver to actually get him the ball and I hope we do.  He’s the kind of player who can make something happen from nothing so if the space is created for him then the sky is the limit.  And with Hugo Keenan and Keith Earls also in the back three we have a lot of try finishing options to choose from overall.

But it’s in the centre where I see the winning and losing of this one for Ireland.  When the Henshaw/Ringrose axis is somehow unavailable there is often much discussion over who should fill their jerseys but I wonder if I’m the only one who feels once both are fit the debate isn’t necessary?  Maybe it’s my blue goggles but I really don’t see another option.

I know there’s talk of going for a more creative 12 but not only is Robbie in the form of his life right now (was breaking gainlines for fun against Munster) but he’s not exactly a slouch when it comes to putting boot to ball either.  And as for Garry, since his return is from a jaw injury I expect him to be lacking little in fitness and I’ve been saying for a while that our attacking game plan needs to include him more.

Speaking of the game plan, obviously our famous half back pairing will be key to this.  I doubt the high ball will never be far from the reach of either Sexton or Murray when it comes to options but hopefully the “predictable” tag will ring true with both and we’ll get to see a lot more variety, using the alternative weapons I have already outlined.

What of the “finishers”?  The name I’ll be most interested to see is Will Connors.  If the match remains close late into the clock as I expect, his chop tackles could be crucial against the tiring legs of those like Faletau.  And in Gibson-Park and Larmour there are decent creative options there as well should we be chasing the game at that point.

But when it comes to predictions I reckon I’m of a mind with the bookies who have us prevailing by 4 points.  It will definitely depend on us having the better first quarter and setting down a marker but if we can establish a lead  we should be able to hold it to prevail by about 5-7.

Right, that’s enough crystal ball gazing for now.  All that’s left to do is sit back and enjoy the weekend’s test rugby.  When the full time whistle blows on Sunday, be sure to hop on our Facebook page and share your thoughts.  JLP