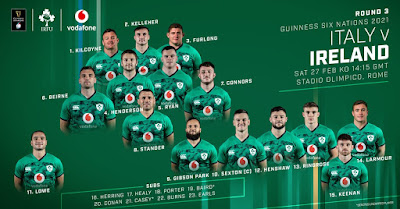 Let’s face it - there is absolutely nothing this Ireland team can possibly do this weekend that will appease the criticism which has been levelled at the Andy Farrell regime.  In fact, if we win, the bigger the margin, the more we’re going to hear “well that’s only because he put out his strongest team”.

Does this mean I’m setting myself up to defend them against all negativity?  Well I guess my opening paragraph makes it look that way doesn’t it.  But I wouldn’t see it so much as a defence, rather an attempted reset towards reality.

Obviously our match against Italy each season is meant to be an opportunity to give some game time to fringe players in the squad as well as young prospects.  But a lot of things are “meant to be” which aren’t these days.

I suppose my stance on the Andy Farrell tenure so far can be summed up like this - while I agree with the view that we are yet to see a discernible approach that is much different to his predecessor, I find it hard to understand how he seems to be getting absolutely no mitigation whatsoever for all that has happened since his first match kicked off against Scotland over a year ago.

Sure, the COVID thing is a big factor in that, although it can’t be the only one since everyone on the planet has that on their plate right now.  I tend to be more sympathetic based on a spanner thrown in the works of BOTH his Six Nations campaigns before they had even lasted 20 minutes.

Ironically Peter O’Mahony was involved each time - we all know about the “chicken wing” a few weeks ago but also he was the one to come off the bench when Caelan Doris’ test debut was prematurely curtailed.  Just to be clear, this doesn’t mean I’m blaming “The War God”; my point is that when you go into a major tournament with a fixed formation and plan in mind, it really does pull the rug from under you when you have to go back to the drawing board before the team’s kit has gotten dirty.

All of which means I reckon the main reason this side is so strong for this is that Farrell & co want to show us at the earliest opportunity what he can do with his best available squad of players.  Maybe to use a poker analogy, an “all-in” bet that once we see them playing at full tilt and see what they can do, we might feel better about the upcoming challenges against Scotland and England.

Remember - I’m not saying it’s a gamble that’s likely to pay off, but if it’s true I can definitely see the logic in it and I’d have to give respect to someone who sticks to their own beliefs rather than ripping up the playbook altogether as so many seem to want.

Well, that’s my “hot take” anyway, I guess we’ll never know.  What say we harp on how the match is likely to go.  If I had to name one position where I thought we’d certainly “take a punt” it’s at 9.  Starting Craig Casey against Italy would at least take some of the edge off not playing him against France.

But instead, we have Jamison Gibson-Park given another chance to show he’s more than just a “ good impact sub” at this level, a point he’s only really likely to prove once he’s allowed to go with his instincts as opposed to being forced to kick more often than not.

As for the rest of the back line, well, as soon as I saw it was entirely made of Leinster players I knew the judgement would be harsh.  To be fair, when it comes to James Lowe I understand the defensive issues which many have pointed out, although each time he has been found wanting there were also questions to be asked of others earlier in the sequence.

What we should be asking ourselves instead of “what they can do wrong” or “why are they all from the same province” is this : “what can they actually provide?” and given we’re likely to face an Italian defence which despite being at home is likely to attempt to “park the bus” without the ball, you have to admit there’s a lot of game-breaking ability from 9 to 15.

During the week in the podcast I spoke to Mark Jackson about how underused Garry Ringrose has been in our attacking set up since he got to senior level, and with our half-backs likely to kick for territory and such an explosive back three on call, we’re unlikely to see that change much here.  I just don’t think we employ Garry’s rugby brain to its full potential and when he does contribute it tends to be in broken play.

Anyway, into the forwards; I have to say I like this front row, and I wonder if this could be the day where Dave Kilcoyne puts the whole “Porter shifting to loose head” debate to bed once and for all.  I definitely see the logic in that shift mind you, it’s just I have long been a fan of “Killer” in green and I can imagine how all that talk must sound from where he’s standing.

Ronán Kelleher is another who was originally tapped by Andy Farrell only to succumb to injury so he too has a chance here to stake his claim for a regular spot.  His try against France might have had a touch of luck to it but he still finished it very well and he certainly put himself about.

The engine room needs no justification - both Hendo and Ryan are born leaders and if we can’t back them to link with Kelleher for the good supply of lineout ball we regularly crave (especially with the coach behind them) then we might as well give up.

Another thing we discussed on the pod was the back row.  With so much talent available around the four provinces, surely that gives us an “a la carte menu” or sorts that allows us to select based on our plan for a given opposition?  Tadhg Beirne switching to 6 seems to provide us with a trio that should punish the Italians for having the audacity for running at us.  Basically whenever Will Connors applies his trademark chop tackles, Tadhg or CJ should be on hand to contest.

Then there’s the bench.  It would of course be cruel not to give young Casey at least 15 minutes no matter what is happening on the scoreboard, but it’s more the introductions of Messrs Baird and Conan that will interest me, not because of their province rather one making his debut and the other making a much deserved return to this level.

Obviously I was as disappointed as anyone to see Rhys Ruddock’s name left out of the 23 altogether but like I said that may have been more of a tactical choice and besides, if this means he’s available to play in Belfast next weekend then at least Leinster get some benefit.  Whatever the reasons I’m sure they will have been explained to him.

What of the opposition?  Well, I never like to see them get an absolute tonking, though if they defend like they did in their first two matches this could be another one.  On the attacking side I reckon Canna’s presence at 12 is much better for both the young halfbacks as well as Brex outside him although with the Henshaw/Ringrose pairing assigned to snuff out their points of attack they won’t have things all their own way.

Before I give my expectations of the result, I first want to lay out what I want to see that will make me “happy” going back to my opening statement.  Basically if I’m right about their desire to show us what they have always meant to do with this team, I want to be shown it.  Hopefully the rugby gods will spare us the injury or controversy this time to make that impossible but I’m willing to admit I’m impressed if I see anything that warrants that, no matter what the opposition might be.

The bookies are saying we should win by 22.  I reckon that’s a reasonable target for us to try and beat.  Remember, Farrell says three wins is still very much doable so if we’re really going to go for that we’ll have to rack up the points to make sure that gets us into the top three.  So with a decent attack plan, good execution, solid set-pieces and D, rugby gods smiling….with all due respect to our hosts, I reckon we should expect a margin of 25 or more from all of that.

Now lads, there’s your challenge - go out and show all the doubters you can do it.  JLP

As always, be sure to follow me on twitter throughout and after the full time whistle head over to the Facebook page and leave your thoughts.