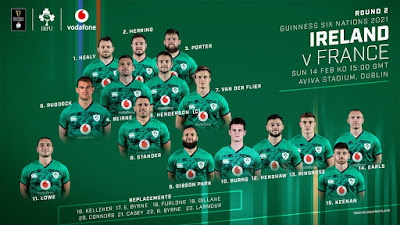 I wasn’t sure how I felt about this match until my eyebrows told me.

As always I wanted to remain positive despite all the evidence pointing me the other way, trying my best to hark back to how I felt when writing a preview only at the end of last October ahead of the last meeting of these two sides.  “Way” back then, you’ll recall, we still had designs on lifting the 2020 Six Nations Championship.

Just a few months later, I find myself arching my eyebrow at the sight of the bookies favouring France by 5 points.  Does my surprise come from a belief that Ireland would win?  Unfortunately not - instead it comes from disbelief that they think it will be ONLY five points.

But that’s all the doom and gloom you’ll see in this preview, except of course my actual prediction towards the end.  For the rest of this article all I want to do is highlight ways in which Ireland can turn those expectations around, something I reckon is anything but impossible.

During the week I appeared on the great Hall of Sportz Rugby Room podcast to discuss Round 1 from last weekend.  I pointed out how the French had always been known for having world class individual players who could get into any team on the planet, only for their failure to work together being their downfall when it came to success on the pitch over the years.

Now it seems they have found the right levels of what Stuart Lancsater calls “cohesion” and despite Italy’s many failings in Rome, it wasn’t so much THAT the French racked up their “fiftyburger” it’s more a question of how.   So my point is that we have a pretty good sense of how they’re going to play, and the fact that they were even able to leave Teddy Thomas on the bench shows just how confident they are, and rightly so.

All of which leaves Ireland’s fate very much in our own hands.  Of course we’re very much up against it on the injury front, that great purveyor of egg-chasing facts Russ Petty pointed out on the twitter machine that this is the first Six Nations match for Ireland that involves neither Sexton nor Murray since 2011.  And with other important leaders like James Ryan and Peter O’Mahony also unavailable, our levels of “succession planning” are bound to be really tested.

So I guess all we can really do is examine those drafted in to replace the absentees.  But before I do, I want to make a point about Andy Farrell’s approach.  Many have disagreed with his selections, and that’s fine.  But to expect him to completely abandon his plan going into this tournament after just one match is just ludicrous, especially when there were actually a load of positives from Cardiff despite the result.

All of which means those missing from the lineup are given direct replacements, mostly involving a selection that moves straight down what I assume was a pre-ordained pecking order.  First choice of note was Billy Burns.  Unfortunately people are still questioning his involvement with the squad but for me, he was always going to play after Sexton in this match.

He prepared for these two matches as Sexton’s backup so why on earth would anyone else be considered for taking over?  And another point I made on that podcast was that the style of rugby he has had success with at Ulster was with John Cooney, a much different style of 9 to Conor Murray, and while I know many think Cooney should be involved on Saturday, in Jamison Gibson-Park we have a half-back with a very similar direct style.

Whether or not they have licence to play that way remains to be seen, but at very least they should be able to make the most of any broken play chances that present themselves, particularly with such a talented back three with him, and yes, of course I include Keith Earls in that - he’s another who has received crazy levels of criticism.

Now we move into the pack.  Naturally I am delighted to see Rhys Ruddock’s return to the test arena and there’s no reason to believe he’ll do anything but replicate the form he has shown wearing blue for the past while.  Front foot ball will be critical to our success and he’s just the man to provide it.

In for Ryan and wearing the captain’s armband is Iain Henderson (sidenote - this must serve as a bonus punishment to O’Mahony who probably would have had the role without his ban) and he certainly displayed against the Welsh he has come into this Six Nations in a rich vein of form so should do well alongside Tadhg Beirne and it goes without saying the lineout calls will be key.

But as always, what we do with the ball is only barely half of the challenge.  Maybe Italy would still have lost even if their tackling was better, but I firmly believe that if we can find similar levels of “cohesion” ourselves without the ball, particularly in the opening half an hour, we can put enough doubt in the minds of our opponents to give us a fighting chance.

For something like that to work it’s not just about the individuals on the pitch; in fact, if anything those unable to take the field can actually be a help to the matchday 23.  What is most under scrutiny on Sunday is the level of team spirit that Andy Farrell has produced in the group - after just over a year, even with that crazy one we have all just had, now is the time we need to start looking for it as we look ahead to 2023.

So while my prediction is for a French win by 6-8 points based on form and comparative lineups, I reject completely out of hand the notion that we haven’t a hope of winning.  With the right approach, particularly on the mental side of things, we can certainly get this campaign back on track, especially with a week off and a trip to Rome up next.

If Farrell wants a “pin to the dressing room wall” quote for Sunday, he could do much worse than this one from the Six Nations’ official media pre-match report :

“Ireland lost to Wales on the opening weekend of the 2021 Six Nations, they’ve never lost their opening two games of a Six Nations campaign.”

Join me on twitter throughout the match and be sure to hop on the Facebook page after the full time whistle to leave your thoughts.  JLP