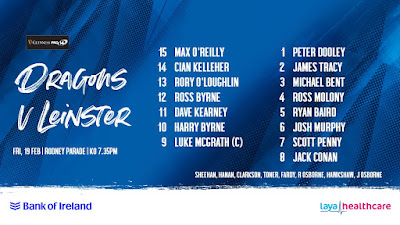 Before I harp on the rugby that is being played this weekend, some words on those who will be unable to play for the foreseeable future.

We all celebrated the return of Dan Leavy to action earlier in the season but with him having been out for so long we all prayed to the rugby gods that his injury problems would not return, the prayers have not been answered.  His plight turns the spotlight once more on the extra challenges experienced by modern day players in his position.

Then we have poor Caelan Doris, who has sadly found himself in another topical dilemma, that of concussion.  I know I speak on behalf of all Leinster & Ireland fans in wishing them both a speedy safe return to action soon.

Now to the matters at hand in Newport this evening, which couldn’t possibly more timely after the above injury news coupled with a poor start by Ireland to the Six Nations.  First allow me to reset the position in Conference A of the Guinness Pro 14.

We lead Ulster by 4 points this morning (5 if you count the margin of 80 in the points difference column), with each of us having five matches still to play.  One of those is at the Kingspan against each other so naturally that will be the key matchup in the run in, but another feature of the schedule is that we both still have to face all of the other teams in the conference.

For example, Leinster play the Dragons tonight, and Ulster go to Rodney Parade on March 13.  Meanwhile Dan McFarland’s men are in Scotstoun this evening; Leo Cullen’s will host the Warriors next weekend.  So as you can see, every minute of action involving the two provinces will have consequences so it will be interesting to see how it plays out.

Now we finally get to this latest Leinster selection.  Obviously the names of the Byrne brothers jump off the page.  For me what’s noteworthy about the selection is not so much their blood relation rather the fact that it continues the policy of having a more creative outside centre alongside Harry in the backline.  Previously it had been working very well with Ciaran Frawley and while Ross has a different style, our attacking options are still greatly expanded with his presence.  And it’s not like the crash ball is totally off the table as Rory O’Loughlin is well able to provide that when required.

It’s definitely an exciting prospect to see how they go at the Dragons tonight, especially with two strong wingers in support who also have Leinster family connections, plus another opportunity for Max O’Reilly to progress.

When it comes to the pack, there is also a lot of strength.  I dare say the form of our starting front row of Dooley, Tracy and Bent would ensure any team in this league would be happy to have them.  Then behind them there’s the likes of Baird and Conan who will be keen to catch Andy Farrell’s eye ahead of the trip to Rome the following weekend.

Personally I’m keen to see a stand out performance from Scott Penny.  He clearly has talent to burn and still very much has youth on his side and I reckon this is the kind of occasion where he’ll want to be getting himself some attention outside his province.

On the bench, well assuming the commentators are going to be Welsh then I’m sure they won’t let our ability to hold the combined talents of Devin Toner and Scott Fardy go without mention, yet the rest of our replacements are all younglings so the one aspect of Leinster’s game I have been most impressed with this season, namely our defensive structure in the final quarter, will be put to the test however the match is going.

Some thoughts on our opposition...the bookies have us winning by a whopping 22 points but it’s important to note that there are a few players in their lineup who have done well against us in the past.  Jordan Williams and Ashley Hewitt have found their way to the tryline before against us more than once, and from the bench so has Dan Baker although those were for the Ospreys.

Baker is one of many new signings for the Welsh region, including Argentinian scrum half Gonzalo Bertanou who featured in the Pumas’ historic win over the All Blacks but doesn’t make tonight’s 23, which definitely has shown an intent to improve their player panel in recent times.  That is definitely good for the both Welsh rugby and the league as a whole, though I’m not sure it will be much of a help to them for this fixture.

Assuming Leinster can settle into the form we have shown since the Connacht setback, we should be able to get close to the kind of winning margin we posted in the reverse fixture that kicked off our campaign. I'll go with a prediction of around 14-16pts to be on the safe side, but the standards at the province should be such that unlike years past when we would always send a similarly young squad to Newport assuming defeat wouldn't be the worst thing, this group will be well able for high levels of pressure to perform.

So here’s to a good night at the office with Luke McGrath leading the boys in blue yet again - I’ll be watching with Glasgow v Ulster on the tablet beside me and I think there’s talk of beer and takeaway as well so obviously I’ll be counting the minutes all day.

As always be sure to join me on twitter during the match and also leave your thoughts on the Facebook page after the fulltime whistle.  JLP