Mark recently appeared on The Harpin On Rugby Podcast to preview the series. 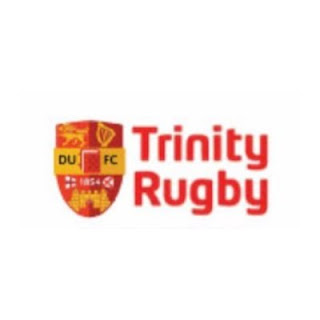 When one thinks about the history of Ireland, never mind the history of Irish rugby, one thinks of Trinity University. Founded in 1592 by Queen Elizabeth I, the university is a centerpiece of the city of Dublin and a huge tourist attraction. Their rugby club is also a piece of history, founded in 1854, it can lay claim to being the oldest continuous rugby club in the world.
Guy’s Hospital FC in London was founded in 1843 but was inactive for a period in the late nineteenth century meaning that DUFC has been continuously playing rugby for coming up on 170 years which is an incredible feat. The man who is often credited with introducing the game of rugby to not just Trinity but to Ireland is Charles Barrington who brought a somewhat organised game of rugby to the university.
The excellent club history section on the club website tells of how the first game of ‘Rugger’ played on College Green was made up largely of “bystanders who just so happened to turn up” as finding opponents for this new sport was difficult to come by. Sometimes, the Dublin Garrison would throw together team but, often, the game was played amongst the various schools in the college. In 1868, the TCD rugby club drew up a list of laws which can be found on the club website that bears a remarkable similarity to the game we know and love today.
Speaking of that famous College Green, Trinity rugby plays host to one of the most beautiful and unique grounds in world rugby at College Park on Pearse Street in the heart of Dublin. The grounds can be seen from Grafton Street and are surrounded by historic buildings. It truly is one of the most picturesque sports grounds in the world, not just Ireland.
Unsurprisingly, in those formative days, the club provided the fledgling Irish international team with a host of players. No fewer than nine players from the club represented Ireland in 1875 with GH Stack captaining the side. Recent internationals who have represented the club include Malcolm O’Kelly; Brendan Mullin; Trevor Hogan; Jamie Heaslip and Niyi Adeolokun.
The last name on that list is the perfect example of what a breeding ground the university can be for athletes. Adeolokun was born in Nigeria but moved to Dublin aged 11 and could turn his hand to pretty much any sport. He represented Templeogue Synge Street GAA and Shelbourne soccer while also being a part of the Leinster U19 development squad and playing schoolboy rugby for De La Salle College. After leaving school, he studied and played rugby at Dublin University for four years before his performances caught the attention of Connacht where he was part of the famous Pro12 winning squad of 2016 – the same year he appeared for Ireland against Canada.
This is just another case study of how Dublin University – and the AIL in general – is a breeding ground for top-level talent while being a superb standard of rugby to watch. Trinity men Ryan Baird; Max O’Reilly; Thomas Clarkson; Rowan Osborne and Dan Sheehan were all part of the Leinster squad who defeated the Dragons in Newport at the weekend and the club has long been part of the fabled Leinster Rugby production line.
Another part of the club’s rich history includes those who have worn the white of DUFC and the red of the British and Irish Lions. Heaslip was a tourist in 2009 and 2013 while Phillip Orr, John Robbie and Hugo MacNeill toured in the 70s and 80s.
Another all-rounder both on and off the pitch to represent DUFC is former Tánaiste, Labour Party leader and Kerry footballer and hurler Dick Spring who was capped three times for Ireland during the 1979 Five Nations.
It was fascinating to dive into the rich and long history of Dublin University Football Club and, truthfully, I have just scratched the surface. It is impossible to tell all of the wonderful stories from the world’s oldest rugby club in continuous existence in just one piece. I, for one, cannot wait to visit College Park soon and watch more chapters of this incredible club be written.
Next week, we’ll stick to the universities and profile Dublin University’s Colours Match rivals, UCD.
For more information check out the DUFC website here
Mark Strange (@realmarkstrange) : I am a freelance sports writer who has been published in soccer, rugby and baseball. I am also an avid fan of ice hockey and just returned last year from a year living and working in Vancouver. I previously played and was PRO for Randalstown Rugby Club before a knee injury cut me down in my prime! I became a Leinster fan when I was younger due to a certain Felipe Contempomi and I am the only blue in a sea of white in Ulster.
*****
Want to see your own rugby opinions on the web?
Click "Write for us" in the sidebar to find out how.