Ulster A v Leinster A analysis by Mark Strange 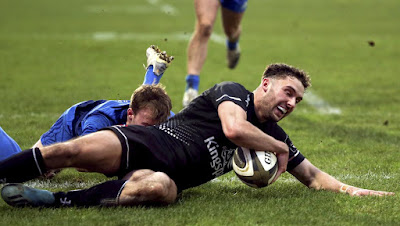 The only rugby match in Ireland this week took place at the Kingspan Stadium on Friday afternoon between Ulster ‘A’ and Leinster ‘A’ and there was plenty of talent for the rugby-thirsty population of this island to enjoy. Ulster coach Kieran Campbell – and senior head coach Dan McFarland – will have particularly enjoyed the runout.

The 37-14 victory for the home side is not quite reflective of the full flow of the game, more indicative of Leinster’s desperation towards the end but Ulster were certainly the better drilled and more cohesive outfit. This was personified by the two scrum halves. Ulster no. 9 Nathan Doak – fresh from his first senior appearance just under two weeks ago - was sharp all game whereas his opposite number in blue Cormac Foley saw two early passes intercepted after taking a couple of steps off the base of a ruck. His uncertainty embodied a Leinster team who, at times, looked like they were 15 strangers who just so happened to be wearing the same kit.

On the other hand, Ulster – decked out in all black – clicked after the early frenetic phases died out. They dominated the ball in the early going but were a bit one-dimensional which made easy pickings for the visitors who actually had some success at the breakdown. Defensively, Leinster were fortunate that Ulster were labored in possession as their rush defence left doglegs which – in the first 40 at least – were not capitalised on. Their scramble defence saved their bacon on more than one occasion when the host’s big runners such as captain David McCann and explosive second row Cormac Izuchukwu were able to punch holes in their D-line.

Izuchukwu is a much-vaunted prospect at the Kingspan and he showed to a wider audience why. The big lock combined big carries with a set of hands that he honed playing 7s which makes for an extremely dangerous combination and just what Ulster Rugby has been crying out for in the engine room.

The 9-0 half-time score told a story of a half of disjointed rugby and two teams who were feeling their way back into action. The second half began with Leinster looking like head coach Noel McNamara had given them the proverbial hairdryer treatment as they came at Ulster with a vengeance but were undone by a beautifully-worked set-piece move from a line-out. This, again, highlighted Ulster’s cohesiveness and understanding. When Leinster were careful with the ball, they looked threatening, particularly out wide but, more often than not, they shot themselves in the foot with unnecessary offloads that did not go to hand, isolated carriers getting turned over and just general silly errors.

They got back within two points with two well-worked tries – one from the pack and the other from the backline – and it looked like they had the hosts on the ropes but, no sooner had they got a foothold in the game, they lost it with the same basic errors that dogged them throughout the game. Bright spots for the boys in blue included replacement scrum half Paddy Patterson who injected life into a stuttering side and captain Jack Dunne and No.8 Alex Soroka who both ran the hard yards.

For Ulster, out half Bill Johnston controlled the game well and kicked masterfully – going 7 for 7 with three penalties and four conversions including a couple from the touchline. The Tipperary native and former Muster man is undoubtedly down the pecking order behind Ireland internationals Billy Burns and Ian Madigan but definitely gave Dan McFarland food for thought with his performance which also included a perfectly-weighted grubber kick for full-back Aaron Sexton’s second try.

Sexton has been a social media hit since debuting in the Ulster Academy a couple of years ago. The former 100m sprinter is much more than just his scintillating pace, however and combined that speed with excellent game-reading, a reliable boot and safe hands which make him a valuable asset anywhere in the back three. His defence was not really tested in this game but he is very much a player in the Jacob Stockdale/Stuart Hogg mold in that any doubts about this side of his game are certainly outweighed by his attacking prowess.

All-in-all, the Ulstermen will be very happy with their performance, especially as it means they have done the double over their neighbours to the south after a victory in Dublin in September. Not so long ago, an Ulster second string would largely been made up of fringe first team players such was the dearth of up-and-coming talent within their ranks but that is not the case now. Another issue was that any promising young players who did stand out often found a glass ceiling stopping them from making the step to the 1st XV. Dan McFarland seems very willing to give youth a chance with Michael Lowry, James Hume and Robert Balacoune amongst others being able to attest to that.

The row that erupted in the week leading up to the senior meeting between the two sides at the RDS last week highlights the fact that Ulster still have a long way to go when it comes to consistently bringing through their own. The senior squad boasts no fewer than SEVEN former Leinster men which saw a bit of a war of words between McFarland and Leinster head coach Leo Cullen. Undoubtedly Cullen has a conveyor belt of talent coming through so it is only natural that some of these have to go elsewhere to get regular rugby and, in some cases, international recognition. It is also only natural that Ulster and others would avail of such an excess of talent. Is it a little rich for Cullen to complain about this talent drain? Perhaps so. It can certainly look that way from the outside and there were plenty of sarcastic violins coming out to play him a sad song,

This game is proof that there is plenty of room for optimism for the Northern Province and also no need to panic for the Leinstermen. The talent in both of these squads is great news for all of Irish rugby as it goes through a bit of a transitional stage. Whether it’s blue, white or green, there is plenty of room for optimism all across the island.

Mark Strange (@realmarkstrange) : I am a freelance sports writer who has been published in soccer, rugby and baseball. I am also an avid fan of ice hockey and just returned last year from a year living and working in Vancouver. I previously played and was PRO for Randalstown Rugby Club before a knee injury cut me down in my prime! I became a Leinster fan when I was younger due to a certain Felipe Contempomi and I am the only blue in a sea of white in Ulster.
*****
Want to see your own rugby opinions on the web?
Click "Write for us" in the sidebar to find out how.
at January 16, 2021