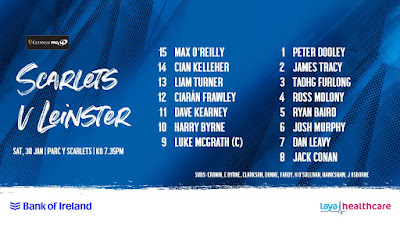 Of course every preview these days comes with the caveat “assuming this competition is played to a conclusion” and the Pro14 is as up in the air as any other.

In fact, even if a champion is to be crowned, we’re still not sure quite how - as things stands it’s only the Conference winners that will go straight into the final but if the Rainbow Cup doesn’t happen (more than likely) then we could see the original six-team playoff structure restored.

Either way, this rescheduled date in Llanelli is valuable for Leinster in many ways, and also valuable for Ireland in one way.  It has been just over a year since Tadhg Furlong last wore blue in competitive play and I’m as superstitious as the next guy so all I will say is that it is awesome to see his name on the teamsheet again.

Overall this matchday squad is a perfect mix of players who are back from injury, have loads of experience, are making a name for themselves this season, and just starting their careers.  All boxes are ticked more than once so let’s start with the “noobs” shall we.

Max Smith had something of a baptism of fire against Connacht at the beginning of the month so this is a good chance to show what he can do.  In reserve there’s Jamie Osborne who was one of the few Leinster A players to impress against their Ulster counterparts the other week and also David Hawkshaw should get some game time.

Also on the bench, no disrespect to tight head Tom Clarkson but I hope we don’t see him too early in this one, though I doubt Furlong will be expected to see out the 80 so there will still be a chance for the 20-year-old to play.

When it comes to leadership, myself and Ciarán Duffy spoke on the podcast during the week about Dave Kearney’s continued form and his presence will definitely be a help for young Smith.  Then in the pack although both are far from “veterans” both Ross Molony and Ryan Baird will be badly needed in the lineout here.

Then if we needed experience in the latter stages there’s the likes of Sean Cronin and Scott Fardy to step in, and as always we’ve a decent starting backrow in Murphy, Leavy & Conan.

When it comes to creativity, the Harry Byrne/Ciaran Frawley axis is used once again which is definitely an exciting prospect for Leinster fans.  They really have shown this season that they could operate for us long into the future and definitely could be the key to success for this match, especially with in-form skipper Luke McGrath providing the service.

On the Scarlets side of things, they have to operate on the assumption that a top three finish is within their reach and with Connacht falling at home to Ospreys last weekend, they could well be eyeing second place as well.  Not that any match against them in recent years has been easy mind you.

The one thing about this encounter is that it falls on the weekend normally left vacant by the league, being one week before the Six Nations kickoff, when Ireland also travel to Welsh shores.  So a lot will depend on which team can get the most out of a patchwork squad, something Leinster are definitely known for, although the Scarlets backrow of Thomson, Davis & Cassiem won’t make things easy.

Bookies have Leinster winning by 12.  I find it hard to argue with the result, and while the margin is definitely doable, the superstition I mentioned earlier is going to play a part in my prediction once again and I’m going to sy 7-9 points.  We definitely have it in us to get a good result but with an entirely new lineup to last week we’ll have to hit the ground running.

Here’s to some great bonus rugby, be sure to head on over to the Facebook page after the full time whistle to leave your thoughts.  JLP