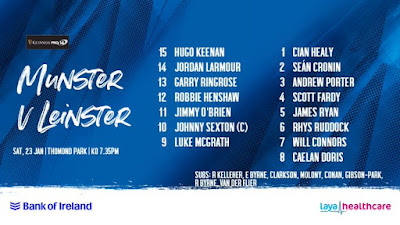 On the podcast during the week I asked Edinburgh fan Sandy Smith about the rivalry with Glasgow and how it was handled by the fans.  He said there were generally two camps for opinion, one where fans of either team looked out for their own and other where they claimed to be “fans of both for the good of Scottish rugby”.

That dynamic looks very similar to what we have here in Ireland, only possibly with a third option thrown in for good measure - with four teams instead of two and one of those having a decent amount of success especially in recent seasons, it’s safe to say that very few who don’t support Leinster will want us to win at Thomond Park on Saturday night.

But that’s ok, by the way.  I mean it’s not like it’s an all out hatred or anything - apart from a minority of eejits, there’s generally plenty of love from supporters all over Ireland for all players when they are decked in test match green.  For this match, it’s all about bragging rights and banter, and I say bring it on.

And as an added bonus, with the European matches off the table and a Six Nations Championship (hopefully) imminent, we get to see both teams putting out their best and brightest for a fixture that actually carries a lot of significance in the Pro14 as well.

Leinster’s maximum point haul against Ulster last time out did much to right the wrongs against Connacht the previous week AND brought us back within striking distance of them on the Conference A table, but with us having to go to Belfast before the season is out, we really can’t afford to lose any more ground so bringing something back from Limerick is critical.

On Munster’s side of the ledger, their win over the Westies gave them a good bit of breathing room at the top, but if you think for a second that means they’ll be taking it easy on Saturday night, you haven’t been paying attention.  That bruiser of a victory from 2018 is long enough ago as it is without semifinal reversals in the meantime thrown in for good measure.

So about those matchday squads...definitely a sight for sore eyes in that 13 jersey is Garry Ringrose, particularly alongside Robbie Henshaw.  Their names give the side a look of champions even before you get to the rest of the XV.

At halfback, Johnny Sexton leads the way and has an in form Luke McGrath beside him - when you finish off the backs with youngsters Jimmy O’Brien, Jordan Larmour and Hugo Keenan you have seemingly infinite possibilities both with and without the ball.  One notable absentee very unlucky to miss out is one Dave Kearney - I singled him out in my review of the season so far.

Before I get to the pack, once more we have gone for the 6/2 gamble on the bench although with Ross Byrne now a seasoned outside centre it’s fair to say we have all possible options covered.  And as some suggest on twitter (playfully I presume though you never know), no doubt Sean Cronin will be willing to put his hand up for a spin at any double digit number you’d care to throw at him.

What a pack of forwards.  Just like that Will Connors and his gravity-defying tackles leap frogs back into the squad, alongside Rhys Ruddock in the form of his life and Caelan Doris who is in many a fan's Lions reckoning no matter where they hail from.

Scott Fardy seems to be on his way back to his best and clearly one of the game’s biggest tussles will be in the lineout so he, James Ryan and Cronin in particular will need to be in perfect sync from start to finish.  That Ulster game showed just how devastating we can be if only we can throw an accurate dart in the opposition 22.

Like I said earlier, that Munster selection ain’t too shabby either.  However I feel about our centre pairing, they’re up against test quality opposition in de Allende and Farrell and both will give us plenty to think about.  I expected to see Healy get the nod over JJ but then again the latter has been in great form of late.  One thing’s for sure - they’ll lose nothing if and when they change their halfbacks so we will have to be ready.

Something in my waters tells me Gavin Coombes is going to have a blinder.  Well, to be fair, he’s been having plenty of them all season so I guess my waters don’t really play into it.  It’s going to be quite a back row battle and I certainly don’t envy Andrew Brace having to deal with the grumpy greats that are Messrs O’Mahony and Sexton in his ear throughout!

For me, it will be all about that first 20 minutes and who gets a foothold.  I reckon Brace will be keen to let the teams play so we could be in for a long night of GIFs being shared by fans of both teams.  Hopefully it’s the actual rugby that settles the night and while I’m nowhere near as confident as I was going into the Connacht match (which of course means you can take it with a massive pinch of salt), I still think we’ll just about edge it by a similar margin to the three points suggested by the bookies.

Here’s to another great interpro - the five we saw around the holiers were among the best we have seen.  Feel free to hop on the Facebook page after the full time whistle and leave your two cents.  JLP