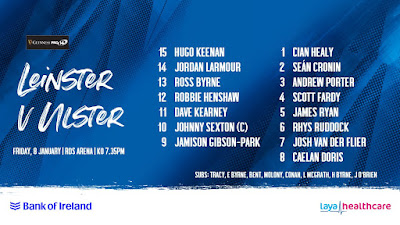 As Leinster fans we are more than used to a match in January which can be comfortably billed as Our Most Important Of The Season So Far, but I’d be hard pressed to remember one such fixture that wasn’t in Europe?

To set the scene - we currently stand 10 points behind the Ulstermen in Conference A.  We have two matches in hand, which could close that gap, only both are tricky-to-say-the-least challenges in Llanelli and Limerick respectively.  And even if we won those, tonight’s clash at the RDS is the first of two with our rivals, when only one can advance to the final.

Another aspect that makes this occasion unusual is the selection of virtually full strength interpro squads at this time of year.  Last time we saw this for the “the oldest fixture in Irish rugby” was the Heineken quarterfinal in 2019.  And bringing up that close encounter gives me a perfect segué into the most interesting aspect of Leinster’s matchday 23.

Not too long ago, Ross Byrne was considered pretty much the only alternative to Johnny Sexton at out half for both province and country.  And on that day at the Aviva, he showed us why by converting a critical penalty despite a searing pain in his kicking leg.

As is often the case in modern professional rugby, the winds don’t take long to change.  Even though Joey Carbery continues to remain on the sidelines, many more 10s have put up their hands for test recognition in recent times, like Ben Casey at Munster, Jack Carty at Connacht (though I’m, er, struggling to remember a recent performance of note by him… 😜), Billy Burns at Ulster and even Ross’ own family has thrown a contender into the mix at his own province.

So now we see him named at outside centre for the first time in his playing career, and again, this is the most important match of Leinster’s season by far.  That’s not a complaint, by the way - I very much doubt Messrs Cullen & Lancaster would make such a call lightly - just one worthy of a few paragraphs in the preview IMO.

While I’m at it, I may as well go one paragraph further.  It’s natural to be sceptical of Johnny Sexton being named in a Leinster matchday squad at any stage of the season.  And that’s not a complaint either - since the 23 has to be announced a day or two early, better to stick him down and assess further leading to kickoff but with Jimmy O’Brien on the bench, I wouldn’t bat an eyelid if he ended up at 13 with Ross at 10 when kickoff comes around.  We’ll see.

Either way, it will be quite the challenge for our starting centres as they will have the top notch combination of Stuart McCloskey and James Hume coming at them for the duration, and seeing how we fared against Messrs Ryan & Arnold last week, we can afford no mistakes.  Having Robbie Henshaw back certainly won’t hurt our cause.

Of course the centre isn’t the only place where we have made changes; they’re all over the starting XV.  Great and all as it was to see two debutants in our back three, this trio has a much more settled look to it and it is a welcome bonus to see Jordan Larmour back in action.

Another area where it’s rare to see we needed a complete change is the back row.  Ryan Baird, Scott Penny and Dan Leavy are all fine players who will no doubt feature at test level in the future but together they were outplayed by their opposition last time out and the combination of Ruddock, van der Flier and Doris certainly wouldn’t look out of place in green against Wales to start the Six Nations, and we’ll need them here against the likes of Marcel Coetzee.

In the front row, much will be expected of Sean Cronin.  With Healy and Porter either side of him the scrums should be ok but it’s at lineout times where we will need him the most.  And similar can be said of Scott Fardy at lock - he hasn’t quite met his own high standards this season yet so now would be a perfect time to do it.

But as always, individual performances are only part of the challenge.  We need to hit the ground running as a team both with the ball and without, otherwise the Ulstermen, as they showed last weekend against Munster, can have an unassailable lead before you know it.

On the podcast this week I spoke to Ulster fan Ian Frizzell about how well their backline in particular can hurt you if given too much space - Billy Burns has played a large part in their 100% record with great support around him, even with the likes of Jacob Stockdale, Luke Marshall and Rob Lyttle unavailable.

Another thing Ian mentioned is that with a return match at the Kingspan to come, if either team can “afford to lose” (terrible sporting phrase though that may be) it’s Rob McFarland’s.  That said, repeating Connacht’s success in D4 would be the perfect way to celebrate their coach signing a new contract, so the bookies’ projection of a 14-point home win looks quite optimistic.

I’ll still give a nod to Leinster giving a decent reaction to last week, though possibly falling short of a try bonus for the first time this season, with a winning margin of about 5-7 points, with obviously our guests being reasonably to bring something back to Belfast.

Whatever happens it is bound to be an exciting interpro - be sure to leave your thoughts on the Harpin Facebook page after the fulltime whistle.  JLP