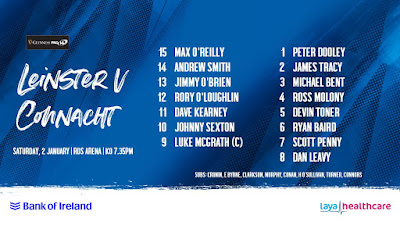 Obviously nobody is assuming 2020’s madness is just going to come to a halt from January 1st, but since that’s the date as I’m sitting down to this preview how can I be anything but positive, especially given how results have gone for Leinster so far this season.

That said, a lot has happened since the boys in blue last took to the field.  Unfortunately we have had a couple of positive COVID19 tests in the squad; I have absolutely no interest in knowing who’s involved and I just hope they’re ok.  The only relevant consequence here was the postponement of the St Stephen’s Day trip to Thomond Park.

Next we had the announcement of the reimagined Pro14 season, which has now been split into two competitions, neither of which has 14 teams (I’m pointing that out for the irony rather than as a complaint).  The unique Rainbow Cup sounds fascinating and I can’t wait to see the fixture list which is guaranteed to have some mouth-watering pairings for the latter stages of the season.

On a more immediate note, however, despite Leinster having another perfect start to a season, the adjusted format means that with only one team to come out of our conference, we must finish ahead of the Ulstermen who have also had a 100% start.  So when you look at our remaining opponents and realise we not only have to play them twice but also have trips to Llanelli and Limerick pending, there is still much work to be done.

All of which means that nothing less than victory over Connacht will do if we want to continue our run of consecutive Celtic crowns.  And although we won this match comfortably this time last year, we had to claw back a 17-point deficit in 2018 and the personnel for the Westies isn’t all that different so of course they can’t be taken for granted.

There’s a lot of eye-catching elements to Leinster’s matchday 23, but what stood out most for me was the selection in the centre.  Jimmy O’Brien has been outstanding at fullback for us in recent times but it will be fascinating to see him line out at 13, especially outside Rory O’Loughlin who has himself earned a lot of caps in blue in that jumper.  It’s an intriguing mix of skills for those positions and their matchup with their opposite numbers Tom Daly and Sammy Arnold could well be key on the night.

Then there’s the return of Johnny Sexton - word on the grapevine is that Ciarán Frawley was meant to play 10 yet had to withdraw which could mean that Luke McGrath was always meant to be captain and thus retained the armband.

Elsewhere in the backs we have two debutantes, namely Max O’Reilly and Andrew Smith.  The former was actually slated to tog out at 15 against Munster last week and obvs we wish them both the best of luck on Saturday.

In the front 5 things do look a lot more familiar for Leinster...our front row of Dooley, Tracy and Bent are all having fine seasons and with Molony and Toner manning the lineouts hopefully all will go well there.  But the back row has an unfamiliar look to it - Scott Penny is definitely at home wearing 7 but with Ryan Baird at 6 and Dan Leavy at 8 it will be interesting to see how they’re deployed.

When it comes to the Leinster bench there is another 6/2 split with loads of back row quality to call on...the more than welcome return of Jack Conan catches the eye but both Will Connors and Josh Murphy (who of course can also slot in the 2nd row) will also be more than useful in the closing stages.  Other returnees to action are Sean Cronin and Ed Byrne so it will do them both good to get some game time.

With only Hugh O’Sullivan and Liam Turner in reserve on the bench I’m assuming Jimmy O’Brien is the designated replacement standoff and I’d have to assume Sexton won’t be expected to do a full 80 so we’ll see how he gets on.

On the Connacht side of things, like I said they won’t make it easy for us particularly with Messrs Blade and Carty pulling the strings.  They’ve had some recent COVID19 issues themselves but not enough to put the game in jeopardy so far and it’s still a formidable XV.  Also, for all I said about Leinster’s lineout prowess there are two quality ex-Blues in Thornbury and Roux going against us.

Prediction time...I’m expecting Ulster to still be 100% by the time we kick off so the pressure will be on to honour the bookies’ spread of 21-points.  As always with big margins like that I’ll make mine a bit more conservative but with good set pieces and Sexton running the show I’ll hope we’ll be able to get somewhere in the 14-16pt range by the end all going well.

As always in these unpredictable times, the first hope is that the matches actually go ahead but assuming they do, here’s to a great Saturday evening doubleheader of interpros to kick off the new year just right.  JLP