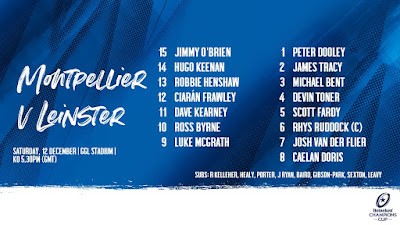 Normally, a pair of European matches in December means a home and away series with the same opposition. But of course nothing is normal about 2020 is it. The Six Nations ended in October, the Pro14 has 12 clubs possibly growing to 16 very soon, and the autumn internationals came and went without a single haka on European soil. But nothing has changed quite as much as the Champions Cup. Hopefully this will be the only season we ever see this format, and although I totally understand why they have done it this way, I hope you’ll appreciate my trying to explain it to myself by devoting a paragraph to it. We’ve gone back to a 24-club field this year, yet instead of four pools of six, there are now two pools of twelve. Each team only has two opponents, and they will play them home and away making for four matches, and the top four in each pool will reach the quarterfinals. For Leinster this means that we have absolutely no say in the fortunes of 9 clubs in our pool. Obviously it’s the same for everyone, but in Leinster’s case we’re talking of one of a handful of teams who would be considered among the favourites to lift the trophy under “normal” circumstances, which means we would be hoping for at very least a home quarterfinal. What this format means is that there is absolutely no room for error. Each match is essentially a cup final. And even when your first match is in France, there is certainly no place for any “sure if we come away with a losing bonus point we’ll be grand” nonsense. And there’s an added complication. Generally the lead in to kicking off Europe involves a string of Pro 14 matches without the “elite” players until a date with Munster at the Aviva Stadium provides the really big match atmosphere, this year, the latter is gone. This time around, we only have a seven day turnaround between those elite players being expected to exchange green for blue, and in the meantime, our opponents Montpellier are able to field a very similar team to that which appeared last week in an eyebrow raising victory at the Stade Marcel-Michelin. So what do we do? Actually I think this is an ingenious matchday 23 for Leinster that solves all the above problems. First, it rewards a lot of players who impressed in that opening spell. Ciarán Frawley and Jimmy O’Brien have both done much to force their way into recognition. Dave Kearney, Michael Bent, James Tracy and Luke McGrath are all experienced players who have shone in Leinster’s perfect start to the season. And there’s also some direct transfers from Ireland starts last week in Keenan, Doris and Henshaw. All led by the barn storming Rhys Ruddock. It’s quite a XV with not too many changes. Then we go to the bench. Only Ryan Baird is without an Ireland cap and surely that’s only a matter of time. Kelleher, Healy, Porter, Ryan, JGP, Sexton and Leavy. Ye gods that’s some amount of talent to have in the back pocket!!! My only qualm would be the 6/2 split with specialist halfbacks both starting and in reserve; that could lead to some interesting assignments should there be an early injury from 11 to 15. But to be honest, that’s pretty much where my qualms come to an end. I have laid out all the difficulties presented to Leinster by the format and the time of year, and until now I hadn’t even factored in the players missing due to injury like Furlong & Lowe. Yet standards are such at the province that we should be more than able to overcome all of the above. Of course Montpellier have many a threat of their own and will be motivated to take our scalp on their own patch even without a stadium full of their fans. And what’s more in Bismarck du Plessis and Louis Picamoles they have a fair amount of experience on their own bench. But the bookies don’t have us winning by 9 points because they plucked the number out of thin air. So when it comes to making a prediction I have to be positive. Maybe it would be a bit much to EXPECT a bonus point win, though we’ll certainly have to go for it should it seem possible. All things considered I’d be happy with the four match points - I’d have gone for us beating the spread based on MHR’s early season form but after their result last week I might go with them pinching a losing bonus so I’ll say Leinster by 5-7, although if we click in the first quarter, literally anything is possible. As we’ve been saying for all matches so far this season, it is of course a shame that no Leinster fans can be there to cheer the boys on, and that counts double when it comes to trips to places like France. But here’s hoping we all manage to enjoy the start to another successful Leinster campaign as best as we can. And naturally best of luck to all Irish provinces this weekend. JLP
Don’t forget to head to our Facebook page after the full time whistle to share your thoughts on the match - we share the best comments on the site.
Montpellier : 15. Vincent Rattez, 14. Gabriel N'gandebe, 13. Yvan Reilhac, 12. Arthur Vincent (c), 11. Vincent Martin, 10. Alex Lozowski, 9. Benoit Paillaugue
1. Grégory Fichten, 2. Guilhem Guirado, 3. Mohamed Haouas, 4. Bastien Chalureau, 5. Paul Willemse, 6. Nico Janse van Rensburg, 7. Yacouba Camara, 8. Jacques Du Plessis.
Replacements: 16. Bismarck Du Plessis, 17. Enzo Forletta, 18. Titi Lamositele, 19. Louis Picamoles , 20. Caleb Timu, 21. Louis Foursans, 22. Paul Vallée, 23. Axel Bevia.
Heineken Champions Cup 2020/21 - Round 1
Saturday, December 12, 2020
KO 5:30pm (Irish time)
GGL Stadium
Ref: Karl Dickson (England)
AR1: Tual Trainini (France)
AR2: Cedric Marchat (France)
TMO: Eric Briquet-Campin (France)
BT Sport 3
at December 11, 2020