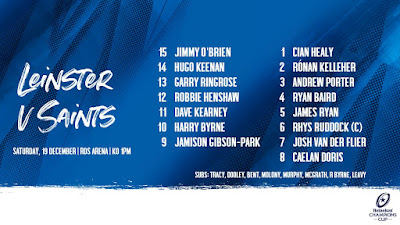 Maximum point win away in France to start, hosting the bottom club in the Premiership a week later, all in a competition where the only team to beat us since 2017 isn’t even involved.  Only going to go one way, innit?

See, here’s the thing.  Even though I know I’m trying to be sarcastic in that first paragraph, I’m still tempted to go back and delete it out of superstition.  But let’s face it, every way you look at this fixture, you’d be crazy to bet any other way.

Better to focus on Leinster’s selection.  How great is it to see Garry Ringrose back, especially with Robbie Henshaw alongside him.  It has been great to be debating alternative for Ireland’s midfield since the return from the break but you’ll have a hard time convincing me they aren’t the best available pairing in blue or green.

And outhalf, Harry Byrne getting the nod over his brother Ross.  Everyone knows that’s not a case of anyone being dropped, rather it’s an indication of the importance of getting every bit of experience into the younger sibling as soon as possible and this is a great time to do it.

We have gotten used to seeing Leinster having a 12 like Ciaran Frawley in recent weeks, but that said both our starting centres were showing more kicking than usual since the COVID break so things probably won’t change on that front, plus Jimmy O’Brien at full back has a decent boot on him too so I’m expecting a similar approach from the start.

Another case of rotation rather than dropping is the reintroduction of Jamison Gibson-Park - it’s quite a battle now between himself and Luke McGrath for that 9 jersey and chances are we’ll enjoy a full 80 minutes of quality scrum half play whatever way things go.

In the pack, although Messrs Dooley and Bent, supposedly our third string prop duo, did extremely well in Montpellier, our starting front row this time seems to be our best available given the long term absence of Tadhg Furlong.  The only concern would be lineouts and if we can keep them relatively simple and accurate, we should have a platform to get close to the expected winning margin.

As well as Harry we have another European debutant in Ryan Baird, and although we have several quality lock options at the province, him packing down alongside James Ryan has a real long term look about it doesn’t it.  Then in the back row we actually have the same trio two weeks on the trot!  And why shouldn’t we as they were all excellent last time out, although Dan Leavy should be keen to have a much lower number than 23 on his back.

The 6/2 split on the bench is becoming a regular feature for us, I wonder how much longer that will continue.  My only worry is that with only halfbacks available an early injury from 11-15 could put us in an awkward spot, but I suppose for this fixture it’s a risk worth taking.

On Northampton’s side, I had a chat with Nathan Johns during the week on the podcast and he offered great insight into the Saints’ current status.  They’re a better team than their standing suggests although as coach Chris Boyd suggested after their defeat to Bordeaux, they seem to be sending an unorthodox selection to Ballsbridge.

George Furbank at 10 is an interesting one.  He’s earned some England caps this year, but that was at fullback - we’ll see what way he operates at outhalf.  In the pack, the Kiwi options of Owen Franks and Teimana Harrison are confined to the bench, although Tom Wood can definitely make himself known at the breakdown from the start.

Look - it’s hard to deny the bookies’ prediction of a 34-point win is a fair shout.  We have put a similar margin on this team in the recent past and that was when they were doing well in the Premiership.  So I really have to go with a forecast close to that - because of the superstition I mentioned earlier I’ll say around 25 points with the hope of more, but basically 5 match points and no injuries will suit me just fine.

Best of luck as always to the other provinces - we definitely have the “easiest” task of the four although I’d say the odds of us grabbing as many as 3 wins altogether isn’t totally out of the question.

It’s a shame about the cancellations elsewhere; obviously the right decision though I hoped a bit more effort might be made to have them played at some stage.  The tournament was shrunk enough as it was so allocating results is really going to have an effect on the final standings.  Just another 2020 anomaly I guess.  JLP