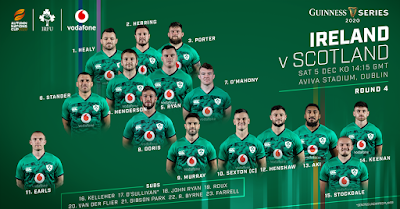 Maybe “preview” isn’t quite the right description for this article, since that suggests my plan is to tell you what I think is going to actually happen. For this particular match, it’s more about expectation than prediction. The tale of Ireland’s opposition so far has been similar to that of Goldilocks. Georgia fought bravely last week it’s true, but still when you add their overall standard to those of Italy and the worst Wales team in over a decade, it has possibly been too poor for us to get a real sense of where we stand. We also faced both England and France away, definitely a standard that’s too good for us, at least for now. This ever improving Scotland team however, which wasn’t far off beating us to third spot in the Six Nations, could be just right. Perhaps they have a few issues at out half, but despite the fact that it’s his debut, Jaco van der Walt has shown for Edinburgh that he knows how to play winning rugby, getting them to within a Mad Dog’s boot of this year’s Pro14 final. Add to that the undoubted skills of their skipper Stuart Hogg and much proven quality from 1 to 23 in their matchday squad and we should have ourselves a formidable opponent. So how we get on depends on what we bring to the table, and from what I have seen this looks to be as close to Andy Farrell’s ideal 23 as he can get taking injuries into account. If that’s the case, then our expectations should be high. For me the most unfortunate player to lose out has been Andrew Conway. Rarely puts a foot wrong in red or green (didn’t in blue either to be fair) and the only explanation I can think of for his omission is that Keith Earls was always Farrell’s preferred starter so had he been fit, this wouldn’t look like him being “dropped” now. But he definitely still has a part to play in our future I’m sure. Obviously it’s good to see Johnny Sexton back at the reins, although with Leinster’s shortened European campaign kicking off on French soil just a week later, I’ll be hoping he’ll be ok to take part. This will also be a perfect chance for him to make me eat my words about captaincy not being suitable for him and I’ll be delighted to tuck in if he does. Another hoping to prove the doubters wrong is Jacob Stockdale. We have seen both good and bad from him in this series, but with the good mostly coming from joining the attack it will be the more traditional full back roles which will come under the closest scrutiny. Let’s just say if he has a bad outing I’d be disappointed to see him still wearing green 15 when the 2021 Six Nations gets underway in February, but I’d be more confident he’ll do more than enough to keep the jersey. The centre pairing has gone back to Henshaw/Aki - although McCloskey/Farrell had their moments against Georgia I didn’t think we saw enough penetration from them and I reckon this pairing looks more settled, although one is bound to be denied a start once Ringrose returns. In the pack, I like the experience Stander & O’Mahony bring to our back row but they can also help immensely in our lineout - with them, Doris and our lock pairing of Henderson & Ryan we have a raft of excellent options to bring our accuracy to levels at which they need to be. On the bench, it’s great to see another first cap being awarded when Eric O’Sullivan is introduced but with WP Nel on Scotland’s bench we’ll need a solid front row platform for a full 80 so this may be a concern in the latter stages. According to the bookies, we are meant to win this third place playoff by 10 points. I have a feeling that’s a spread that could be used to motivate the Scots so we will have to be at our best from the kickoff. For me it’s all down to how the coaches and leaders within our playing group can provide the motivation. Like I said, I’m not going to give an actual prediction, but to end Andy’s first year in charge on a positive note then both a solid performance and any kind of victory have to be a bare minimum and I couldn’t consider myself a proper fan if I didn't at least back the boys to do that. Here’s to my having a cheery writeup to prepare for Monday! JLP