After the England match I was dreading to go on to social media because I knew the comments would be scathing.  But as it turned out, I didn’t even have to avert my attention from the tellybox.

No sooner had the final whistle blown than Eddie O’Sullivan, of all people, was tearing into the performance.  I mean really going to town on it.  I had my own writeup to make my case about that particular match so I won’t repeat it.  But as far as Eddie goes, I was so annoyed listening to his rant that in the end I went to twitter more for sanctuary than doom-scrolling.

Of course the source of my annoyance was down to “whataboutery” with regard to the 2007 World Cup in general, but this weekend I was reminded of the particular 80 minutes which defined the failure of that campaign.  September 15 at the Stade Chaban-Delmas, Bordeaux.  Ireland barely scraped to victory over Georgia, scoring only two tries and conceding ten points in the process.

Sunday’s match, as you can see by that lead-up, had many similarities.  But there were also many differences.  For one thing, rugby in Georgia has improved immensely in those 13 years - I’m pretty sure there wasn’t a whole lot of debate back then about them joining the Six Nations.  And at times in the Aviva Stadium they did a lot to pose us problems both with and without the ball and they deserve to feel good about the result despite the defeat.

But for the third week in a row, Ireland have been forced to take a long hard look at where we are heading.  This was match 8 in Andy Farrell’s tenure, and what a rollercoaster it has been.  Let’s not forget that only a few weeks ago we took to the field in Paris with a shot at a championship.  Now we’re furiously sifting through the remnants of a terribly disappointing second half looking for positives.

So for this writeup I’ll go with the format I have been using for Leinster matches in recent weeks, namely rewatching the match in 10-minute segments and harping on what I see.

Given how our best moment against England was a little chip over the top from Billy Burns that led to our only try, it makes sense that we did it again with our first possession but it didn’t quite pay off for us, nor did the next few attempts to put boot to ball.  The visitors clearly came with defensive organisation as a priority so it would take some innovation to get past them.

And from the start it was clear that this innovation would have to be more than just trucking it up the middle - this made it unfortunate that we had selected two centres for whom that is their forté but eventually one of them, Chris Farrell, was able to get his trademark no-look pass to work perfectly putting through Burns and as the clock reached double figures we had ourselves the lead.

If I had to pick one mitigating circumstance for Ireland it was that perhaps Georgia could have seen a yellow card at some point for racking up the penalties (not to mention a possible deliberate knock on or two), and two in quick succession after Burns’s try got us down the field allowing him to stretch the lead to ten.

But this portion of the match contained it’s highlight, and it was to come from the Lelos.  Before I watched it back I assumed this was a pre planned move off a set piece but in actual fact it happened a phase or two after they received a 22 drop out.

A brilliant exchange between their fullback Soso Matiashvili and centre Giorgi Kveseladze put the latter clean through our flailing tacklers and once he sold Jacob Stockdale down the river with his dummy, he had the strength to make it the rest of the way.

This was even better than Johnny May’s effort a week earlier, since it didn’t really need the help of an Irish mistake.  Now I know Stockdale already had defensive question marks and at this level a “first-choice” 15 shouldn’t be dummied so easily, but Georgia’s execution was so clinical throughout the move that I dare say the offload would have been successful anyway had Jacob gone for the man.

He almost made amends shortly afterwards with a strong run up the touchline with Earls in support but his kick ahead went just a little too long and Matashvili was able to clean up.

A lot of the post match comments suggested we offered nothing original with the ball.  Well that’s not true, at least not in the first half.  We were flinging it about a good bit and our back row were often popping up in the widest channel and making some headway.  One such foray fromtadhg Beirne got us into their 22 where a penalty put us back out to six points in front.

Then we had Stu McCloskey showing us he’s not all about the crash ball when a perfectly weighted kick cut its way through a gap in the Georgian backfield to find touch in their 22, and after getting bullied on our own lineout throw the previous weekend, this time we managed to put them off their throw and win a scrum 5m from the line.

It was 50/50 with scrums in the first half, with Andrew Porter having a lot more luck on his side of the front row than was Finlay Bealham, but having won the 5m scrum, Porter got us the penalty and although the Georgian try line resistance was strong, with another pen adv in our back pocket a long pinpoint pass from Stockdale found Hugo Keenan out wide to finish.

We worked our way to another spell around their line as the clock was ticking down and probably should have scored again but the visitors just about managed to hold us out.  Little did we know that this was to be the way for the rest of the match...

These paragraphs are going to start getting a hell of a lot shorter!!!

One silver lining about the second half was that our own defence was solid, but cloud that was our failure to rack theirs for the duration endured.  This 40 minutes is the tale of a series of Irish possessions and how they ended.  Forward pass here, knock on there, jackled penalty leading to three more Georgian points elsewhere.  Losing Billy Burns earlier than intended sure didn’t help, although you’d have expected Ross Byrne to be able to keep our motor running.

To be fair to Ross it wasn’t his fault that his first contribution, a perfectly placed kick forcing a Georgia lineout 5m from their line, resulted in them being able to exit when eventually Bealham shipped another penalty, this time on our own put in.

He was then joined in the halfbacks by Kieran Marmion, who’s first box kick was perhaps a bit too far yet Hugo Keenan did really well to haul his man down anyway and force a penalty allowing Byrne to stretch the lead to 13.  But sadly that was to be that for the scoring.

More journeys into their 22 coming to nought.  First Will Connors was ahead of a Ross Byrne kick forward, then we had another one jackled away from us.  Next Shane Daly, on for his first cap but on the wing rather than his preferred full back role, had some decent space up the wing only to be hit shortly after kicking it forward - TMO had a look but there was nothing in it.

Iain Henderson was definitely a worthy Player of the Match award (at least on our side, despite the defeat a few Georgians were candidates) and it was good to see him back to his best at this level, although even he couldn’t escape the blips as he was pinged to bring yet another Ireland attack to an end.

To say the match fizzled out was an understatement - the closing seconds spoke volumes in that we went from being held up over the line, to conceding a penalty at our own scrum, to getting jackled back at halfway.

I feel about this result the way I do about the colours we were wearing.  If you told me the jersey was black, my thoughts would be positive until I actually saw it.  Same goes for this Irish victory.

On James Ryan as skipper, he is definitely at the beginning of what is best described as an “upward curve”, but he is also definitely a long term choice for the job and needs as much time as we can give him.  I feel the opposite way about the McCloskey/Farrell midfield axis - they never really got the penetration we would have wanted and I reckon we have better options available.

But overall, some perspective is needed - first we cannot ignore the effort put in by the Georgians and besides, hollow November victories over lower tier opposition are something of an Irish tradition, after all.  The best way to put it behind us will be with a convincing performance and result against the Scots next week - although it’s a third place playoff, I want us to see us select and play as if it's a cup final.

Only then can we cast a proper verdict on the Andy Farrell regime’s first year in charge.  Hopefully we will all go into the match with an open mind.  JLP 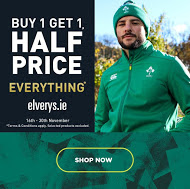