Champions Cup Irish Provinces Team of Round 2 by Mark Jackson 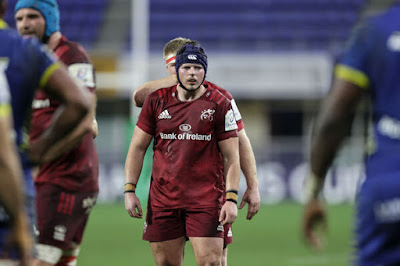 A veritable mixed bag from the four provinces this past weekend. The selection definitely is mainly red with a fleck of blue and white without any green this time around.

14. Keith Earls (MUN) slow start but his all around game contributed to Munsters recovery.

12. Robbie Henshaw (LEI) got good go foward for Leinster when was needed. Hopefully keeps staying fit and strings a series of games together.

11. Dave Kearney (LEI) Wings didnt stand out across all 4 sides. Kearney was solid rather than spectactular. His try scoring prowess continues.

10. JJ Hanrahan (MUN) probably his best game for Munster. Really steadied a ship that was all over the place early on. Place kicking was immaculate and general game managment as well was top notch.

9. John Cooney (ULS) Kicking and running game almost brought a victory from the jaws of defeat . Kieran Marmion was good in a losing effort too.

8. CJ Stander (MUN) Did his usual hard yards and breadown work byt added some footwork and an offload too which was nice to see. Best game for a while.

6. Gavin Coombs (MUN) Not his usual MotM performance and suffered early on in contact but grew and grew as the game went on. A powerhouse.

5. James Ryan (LEI) Alongside his counterpart had an influence ball in hand and some big hit in the defensive line. Big improvement on earlier outings.

4. Ryan Baird (LEI) A first start since injury and showed what Leinster and Ireland missed. Athletic and picked some great lines in attack. Got some time at 6 too where many see his future.

3. Andrew Porter (LEI) Not a vintage week for all the THPs, Porter still in a shortened bout of minutes showed more than the rest.

2. Rhys Marshall (MUN) Now the owner of the best barnet since Jack Goodhue has his covid cut. An abrasive performance typified Munster's never give up attitude. Good darts as well see Marshall earn the 2 jersey.

1. Josh Wycherley (MUN) Dont call it a comeback...Saw the bright lights of Stade Marcel Michelin after earning his wings from Slimani in one scrum. Wouldve messed lesser men up, by the end was firmly on top of the much vaunted French international. Ireland's prop stocks are refilling again. Excellent!

Mark Jackson (@hoomanbear) : An Irishman in London....lover of rugby, NFL and family n friends not always in that order..consumer of meat, best friend to Wayne Barnes. All views my own and always open for a lively debate. Ireland, Leinster and the New York Giants fanatic.
*****
Want to see your own rugby opinions on the web?
Click "Write for us" in the sidebar to find out how.
at December 22, 2020