Champions Cup Irish Provinces Team of Round 1 by Mark Jackson 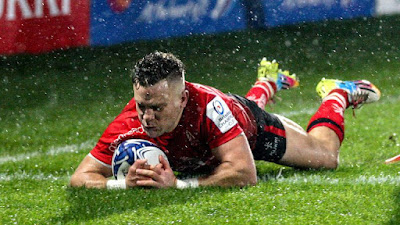 15. Jimmy O'Brien (LEI) He has continued his good form from Pro14 with his excellent kicking game edging out a fine game from Mike Haley.
14. Hugo Keenan (LEI) Dovetailed nicely w O'Brien in their kick n chase game, some big hits too in defence for a slight enough frame.
13. James Hume (ULS) Some lively handling and lines of running from young Ulster centre...defensiviely needs some work but impressive form continues ball in hand. Sam Arnold had some nice touches in Paris too.
12. Ciaran Frawley (LEI) 2nd playmaker in midfield, his passing game and footwork are a joy at times.
11. Keith Earls (MUN) Just edges Matt Healy for the 11 shirt. His experience in awful conditions was needed time and again and had a fine game under the high ball and defensively too.
10. Ian Madigan (ULS) His best game since returning from Bristol. Was surprised to see him subbed. Jack Carty unlucky to miss out after a fine outing vs Racing92.
9. Luke McGrath (LEI) All 4 starting scrum halves can claim a right to the 9 shirt with all performing well. McGrath has added a threat to his running game this season so far which gets him the nod.
8. Gavin Coombes (MUN) The time is now for this specimen. So hard to stop ball in hand, yards after contact better than any Irish carrier I've seen since David Wallace. Get him in green asap. Doris and Boyle also had great games.
7. Josh van der Flier (LEI) A try and a typical all action performance that we are accustomed to from JVdF.
6. Rhys Ruddock (LEI) Another superb outing from Leinster's most consistent performer. Physicality needed againat a large Montpellier pack.
5. Tadgh Beirne (MUN) All singing, all dancing, all kicking effort from Beirne. Carried with intelligence using his pace and footwork to effect.
4. Ultan Dillane (CON) If only could see this impact more often. He has all the tools. A handful for Racing defence all day.
3. Finlay Bealham (CON) Did his primary job with great technique and power against heavier opponents. Edges Michael Bent for tighthead jersey.
2. Rob Herring (ULS) Probably weakest position over the weekend's performances. His greater accuracy out of touch see the Irish incumbant get the hooking role.
1. James Cronin (MUN) Made mincemeat of the Quins scrum and his best outing in a Munster jersey for me. Peter Dooley had a fine game around the park too.
Mark Jackson (@hoomanbear) : An Irishman in London....lover of rugby, NFL and family n friends not always in that order..consumer of meat, best friend to Wayne Barnes. All views my own and always open for a lively debate. Ireland, Leinster and the New York Giants fanatic.
*****
Want to see your own rugby opinions on the web?
Click "Write for us" in the sidebar to find out how.
at December 15, 2020