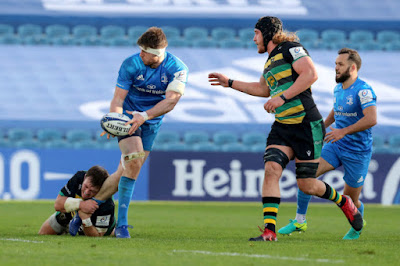 The Leinster medical team certainly earned their money on Saturday. We were all very excited to see Harry Byrne get his first European start as he looked to carry his impressive Pro14 over into a higher level of competition, only for a back injury in the very last warm-up drill to scupper his day. I can’t help but think that the speed of the game would have suited his attacking style. Given how the Saints line speed and physicality at times presented a few difficulties to the Leinster attack, it would have been interesting to see how Harry would have reacted, especially given how that style of defence is Ireland’s Achilles heel at the moment.

Caelan Doris suffered a flare up of a calf injury that was picked up against Scotland a few weeks ago, meaning he was also scratched off the line-up. It’s always disappointing to see a player of his class prevented from playing. Hopefully for everyone involved, but especially for him, this doesn’t stop him from displaying a level of form that has propelled him into the early season Lions conversation.

Jimmy O’Brien and Garry Ringrose also had a clash of heads early in the piece, leading to both leaving the field for HIAs. The latter did return which was especially good to see given that this was his first run out since suffering a broken jaw. O’Brien did not reemerge and will go through the return to play protocols - another youngster who has been cut down in the middle of an impressive run of form; he was keeping Ireland full-back Keenan out of the 15 shirt after all. He’ll join a lengthy injury list that includes the likes of Jonny Sexton, Tadhg Furlong, Ed Byrne, Jack Conan, James Lowe, and Jordan Larmour. That list is only getting longer with the Christmas interpros now upon us.

We said this on the ‘Opposition View’ podcast during the week, but the 42 point spread coming into this was absolutely ridiculous. Chris Boyd’s comments following defeat to Bordeaux about squad rotation led to a huge over reaction from the media. He picked a mix of young players who deserved a run and experienced internationals who needed to be bedded into the side after returning from the Autumn Nations Cup. George Furbank at 10 - someone who is in the England squad as a full-back - certainly wasn’t a case of picking the strongest option, but he was running in that position as part of the opposition scout team when in England camp recently. What’s more, both Dan Biggar and Courtney Lawes were supposed to start in the RDS until picking up late knocks in the days leading up to the fixture.

Make no mistake about it, this is the best outfit that Leinster have come up against so far since the season restart. Don’t let recent form be misleading, they are a fantastic attacking side that is not afraid to show off their skillset, and at times on Saturday they did. Furbank and Rory Hutchinson excel at bringing others into the game around them - see the latter delaying a pass midway through the second half to open up a gap for the break from Fraser Dingwall. The young outside centre was quite impressive as well. He showed his ability to make defensive reads in the first half to smash Ross Byrne back behind the line inside the Saints 22 early in the first half, while the line he picked for the first Northampton score was an excellent one - both Rhys Ruddock and Josh van der Flier failed to pick it up due to how he came onto the ball so late from a deep position.

On the defensive side of the ball, the visitors brought an impressive level of physicality that forced an unusually high error count from Leinster. Yet a significant number of line breaks still took place despite the forward carriers sometimes being knocked back behind the line. No doubt Cullen and Lancaster will be frustrated, but at the end of the day, a bonus point win was still picked up against a side that played well. Though not many may have seen it coming, this test at this point of the season will stand to Leinster. I for one do not mind heading to face a resurgent Munster side in a Stephen’s Day fixture in Thomond Park off the back of a display that will lead to a big review to cut down on errors.

It’s a cliché, no doubt about it, but only because there is more of an element of truth in it. During the double winning season of 2017/18, it seemed that time and again Leinster used the ten minutes either side of half-time to go up through the gears, securing crucial scores to kill the game off as a contest. So it proved on Saturday. After the try from Tom James, it looked as if Saints would head to the sheds only 3 points behind, something which would have buoyed them significantly. That reckoned without the score from Dave Kearney in the corner just before half-time and Jamison Gibson-Park’s break off a scrum early in the second half. These were the tries that killed the game as a contest, even if Saints did prove a frustrating presence, something which led to Ross Byrne showing them significant respect in choosing to take his points when on offer in the second half. Leinster are not any other side for sure, but fans of any other side in Europe would be delighted with taking punches such as the one thrown by Northampton and still killing the game off so early by coming away with a bonus point. It is ok that the fourth try did not come by half-time!

It is no secret that Andy Farrell is a big fan of Ryan Baird. He trained with Ireland during the 6 Nations, and no doubt would have been capped during the Autumn if not for injury. Yes, it might be easy to heap praise on him since he was named Star of the Match, but from on Ireland point of view it is hard to stress how important his performance on the weekend was. He proved a consistent source of go-forward ball in the face of a defence that didn’t always offer it very easily. The optics of an Irish second row basing through a fringe defence and fast line speed offered by an English side, one that was catching many of his teammates back behind the line, will not be lost on Irish fans. He and James Ryan also proved to be disruptive presences at the lineout, but I’m not sure how much to read into that given how the Saints set-piece has struggled all season.

Gibson-Park did not play poorly by any stretch of the imagination. He deserved his opportunity in Farrell’s squad during the Autumn, but Luke McGrath’s form for Leinster since then should have him as first choice in the RDS. The aspect of his game that was missed on the weekend was his fantastic support lines off of line-breaks. It seems like an easy enough skill, but clearly one that McGrath excels at. Breaks from Ringrose, Baird, and van der Flier in the first half all needed just one more pass only for no support runner to offer himself. Gibson-Park certainly has the speed to be in those positions, as shown by the clean pair of heels he displayed for his try, but it feels like on countless occasions in the Pro14 so far this season McGrath has been there to take the pass and keep the break alive.

It was interesting, if slightly frustrating, to see last week Jacob Stockdale and Hugo Keenan, the two men who occupied the Ireland 15 jersey of late, playing in Europe for their provinces on the wing. This was because of the form of Michael Lowry and Jimmy O’Brien for Ulster and Leinster respectively, two men who deserved their go in Europe at full-back. Hence why it was particularly frustrating to see O’Brien sustain that head knock so early. Given his form this year, it would have been interesting to see if Keenan could have knocked him out of the full-back role. If O’Brien kept going and playing as he has been, no doubt Farrell would have come calling. The Ireland full-back needs to be playing in that position week in week out, and O’Brien deservedly has been doing that.

The positive of the injury though was that we got to see Keenan at 15 in a big European game once again. What’s more, he was used as a second distributor in a way that maybe he has not been in a green shirt, or at least not to the same extent. Without doing anything spectacular, he looked very confident in taking the ball to the line behind a decoy runner in the second distributor role, drawing at least one defender every time and opening up a pocket of space for a man outside of him. I would love to see more of this - especially if O’Brien’s head knock does rule him out for a while now - over the coming weeks, as well as this responsibility being transferred to the Irish side.