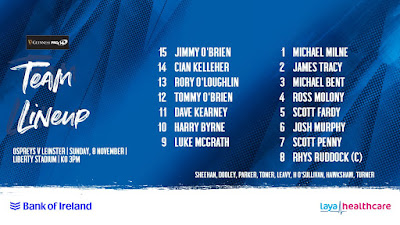 They say sport and politics shouldn't mix but the way today went has forced my hand. There I was, sitting here at the laptop, ready to scribble my preview, when up pops a WhatsApp message on my phone...
"🎉🎉🎉🎉🎉🎉🎉🎉"
Like many others this week I have been glued to CNN since Tuesday waiting for a definitive result of the US Election, but I took an hour off to harp on some rugby...of COURSE that's when they call it!!!
So a couple of hours later and I still have this to write...I won't make it too long, but of course I am still definitely looking forward to watching Sunday afternoon's clash. During the week I got to chat to Ospreys fan Brandon Smith on the podcast about the past, present and future of the region.
This match up is one I have always called "Pro14's biggest organic rivalry" but the great contests between these two sides seem like a long time ago as they have had a tough time of it for the past couple of years.
But Brandon pointed out that they are definitely building up their squad again with a mix of youth and experience and when coach Toby Booth has had some time in the role they can be a force again. You have to say with names like Lydiate, Davies, Scott Williams, North and Myler on their books he has a point.
Then we come to Leinster's selection - I like it a lot, mostly because it has a settled look about it, contrary to the claims we used a lot of players. Tommy O'Brien and Rory O'Loughlin brought all the physicality I expected against Glasgow so we can expect more of the same.
Rhys Ruddock was man of the match that Monday night and he'll no doubt put in another strong performance from the number 8 position and along with Penny and Murphy the breakdown should be a key area what with Dan Lydiate leading our opponents.
At halfback we have two young 10s, though it's ironic that Harry Byrne is the senior of the two!!! He's looked settled in the role in recent outings anyway and we can expect more from him here, especially with an in form Luke McGrath partnering him.
In our second row, congrats are in order for Ross Molony who is making his 100th Leinster appearance. One of many in our current squad who played in that 2013 Schools Cup final, he has captained the side on occasion and has always done a job for us, particularly in the lineout. He and Scott Fardy should have a fascinating battle with their opposite numbers Adam Beard and Bradley Davies.
The bookies have set us quite a challenge, projecting a 19 point for us. Personally I'll be happy with another bonus point win regardless of the margin, and I'm assuming the Ospreys will be keen for an impressive home display after disappointment against Zebre last time out. So I'll go for a 10-12 point win, hopefully that can help round off a week of celebration!!!
Speaking of which, time to get back to it here in Harpin Manor!!! Enjoy the match; be sure to leave your thoughts at full time on our Facebook page. JLP
Ospreys : 15. Cai Evans 14. Mat Protheroe 13. Scott Williams 12. Joe Hawkins 11. Luke Morgan 10. Josh Thomas 9. Reuben Morgan-Williams
1. Rhodri Jones 2. Dewi Lake 3. Ma’afu Fia 4. Adam Beard 5. Bradley Davies 6. Will Griffiths 7. Dan Lydiate > capt 8.Gareth Evans
16. Ifan Phillips 17. Gareth Thomas 18. Tom Botha 19. Rhys Davies 20. Olly Cracknell 21. Shaun Venter 22. Callum Carson 23. Hanno Dirksen.
Guinness Pro14 2020/21 - Round 5
Sunday, November 8, 2020
KO 3pm
Liberty Stadium
Referee: Sam Grove-White (SRU)
AR1: Adam Jones (WRU)
AR2: Ben Whitehouse (WRU)
TMO: Tim Hayes (WRU)
Live on TG4, eir Sport 1
at November 07, 2020