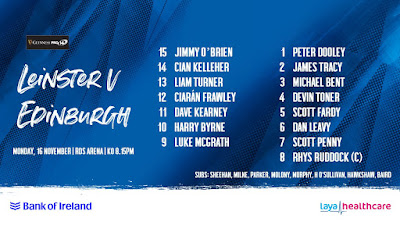 There was a time when neither Leinster nor Ireland were playing either Saturday or Sunday meant yours truly had absolutely no harping to do...but the times aren’t like that are they.  This weekend is busier than ever as it happens.

So while I’m still mulling over events from the Aviva Stadium, there’s also Round 6 of the Guinness Pro14 to consider with Richard Cockerill’s men coming to the RDS.

During the week I spoke to Sandy Smith on the podcast; he writes for the Edinburgh matchday programme and he pointed out that although they’ve had a shaky start to the campaign after the semifinal heartbreak, they’ve put a couple of good results together and certainly won’t be coming to Ballsbridge to keep the score down.

But once again Leo & co have been able to keep a settled look to the matchday squad, with Rhys Ruddock leading the way once more from number 8, Luke McGrath & Harry Byrne manning the halfback roles and Jimmy O’Brien getting another chance to increase our selection headaches at full back.  It’s definitely an interesting spell for this Leinster team because with our shortened European schedule now known, there’s a lot of big decisions to be made once the test players return.

There are still a few interesting changes, not least of which is Dan Leavy returning to a starting role in a pack that overall has a very experienced look about it.  Also making a welcome return is Ciaran Frawley who badly needs a good run of games under his belt and his partnership in the centre with Liam Turner could be pivotal.

For this match I reckon it’s our bench which looks to be most interesting.  I watched Edinburgh’s last match against Cardiff (well as much as I could since the fog got worse as it progressed) and they really brought the physicality especially on defence so the 6/2 split that we’ve gone for could prove useful.  And with Ryan Baird looking like he’s poised to join the back row it could be that Dan is tasked to go full throttle from the off, not that he’s known for holding back, mind you.

If I had to pick one Leinster player I’d like to see stand out it’s Scott Fardy.  These have been trying times for everyone, and I don’t mean to be overly critical but it’s safe to say he hasn’t been at his best since the return from COVID and this is just the kind of match where he can play himself back to the levels we’re used to seeing from him.

Among the players to look out for in the opposition there’s David Cherry, a who seems to be a strong carrying hooker who will get on the end of short lineout mauls if allowed, Henry Pyrgos seems to have more of a nine and a half role as skipper with the young 10 Nathan Chamberlain outside him, and if there’s physicality going on, the whole league knows Pierre Schoeman won’t be too far away from it.

But when it comes to my expectations for the boys in blue, our run of form makes it very easy for me to spell out...more of the same, please.  Keep the defensive systems tight and make the most of any chances that are presented.

It was interesting to see Harry Byrne tested by Ospreys’ blitz defence and assuming Mr Cockerill was watching he could be in for more of the same.  If he can adapt quickly he definitely has enough talent around him to make a run at the bookies’ 21-point predicted winning margin.

Personally I reckon our guests might pose us an early challenge so we may not win by that much but I’ll still back us to wrestle control and come out on top by around 13-15 pts when all is said and done.

Here’s to another successful Monday night for Leinster!  JLP