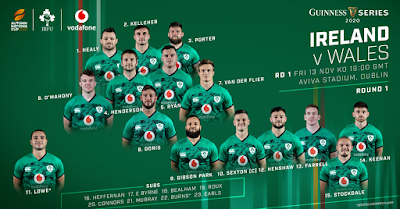 Thanks to COVID19 everything in sport is different this year, and trust me, that’s not a complaint as with all that has happened we are of course happy just to see anything at all to take our minds off everything else.

We had the Six Nations ending in October, the 2019/20 season ending after the 2020/21 began, and as for the Champions Cup, well I don’t think anyone really understands the whys, whens and wherefore about that we’ll just watch the rugby matches and hope it somehow gets our team into the knockouts.

But although the southern hemisphere teams may be missing and the branding different, this Autumn Nations Cup at least means we have November internationals in the correct month and that has to be a good thing; plus, with an actual trophy to play for, it comes with that little bit extra.

So while the presumption among all of us online chatterboxes was that these next few weeks will be for nothing else but experimentation, I suppose given all of the above it’s not all that surprising to see the bulk of the matchday squad remain the same.

In my writeup of the French match I came to two major conclusions, that neither Sexton as captain nor Stockdale as fullback were the best ideas for us.  So here we are, a couple of weeks later, with Sexton still as captain and Stockdale still as fullback.  This is one of those times where I say “I really, really hope I’m wrong” and I also hope you appreciate that I’m being genuine.

And to be fair, it’s not as though I have absolutely no faith in the players to make their respective roles work.  It’s just we haven’t seen a lot of evidence of it so far and time in the test rugby calendar is short even without the 2020-ness of it all.

One of my requests did come to fruition, however; the immediate elevation of James Lowe.  I mean, you just gotta throw him in, don’t you.  He’s just that kind of player, and the way these fixtures have panned out it’s perfect for his introduction to test rugby.  Home match against Wales followed by a trip to Twickenham - anyone who has watched his performances at Thomond Park will know he can bring the attitude required for a big occasion (yes, I know he overstepped once, but I still contend you need his brand).

And don’t forget Hugo Keenan over on the other side either.  Just 160 minutes into his test career and he plays like he’s an automatic selection.  I mean, it takes some form to keep Keith Earls on the bench and if he keeps it up he may well do it again next week.

In the centre, while it’s not the partnership we started this portion of the campaign with, there’s still a lot of punch in that Henshaw/Farrell axis, and I reckon we get a lot more out of the pair of them when they actually start the match.  And speaking of starting, it will be very interesting to see how Jamison Gibson-Park performs because if he brings the kind of variation he has shown at Leinster this season, it will be hard to see him giving up the jersey any time soon.

Now to the pack...the most eye-popping change is the omission of CJ Stander.  In a contest where jackling will be key that’s definitely an eyebrow-raiser, although Caelan Doris would be more of a long term choice there and thus would need the game time, and besides, Josh VDF isn’t exactly a slouch in that area.

Besides, it’s not like there isn’t experience out there in the back row with Peter O’Mahony back to a starting role.  While I understand all the chatter about Rhys Ruddock’s claims for test involvement, our back row depth is just crazy strong right now and we have to leave it to the coaches to find the right combinations.

Now to our opposition.  One thing we absolutely cannot do is buy into a narrative that suggests “Wales are crap now”.  They might be coming to terms with a new coaching ticket which is struggling to put wins on the board, but just look at that lineup!!!  Liam Williams?  Leigh Halfpenny? Jonathan Davies? Alun Wyn Jones? Justin Tipuric?  Toby Faletau?  Josh Adams?  That’s just a smattering of the talent that could do some serious damage and coming to Dublin as 9-point underdogs could be just the motivation they need to ambush us.  If we don’t prepare like they’re the 2019 Grand Slam champions, we could pay the price.

My expectations are relatively simple.  I want to come out of this match with a belief that we can go to Twickers the following week and compete.  This “Leinster/Saracens” and “Ireland/England” narrative whereby our guys don’t match up physically or mentally is one we should be working on, and if we’re going to go with stronger squads, this contrived tournament has at least given us an extra chance to address it.

So we’ll need to front up to the Welsh this Saturday, and if we do and manage to press home our advantage, then I reckon we can honour the bookies’ spread, and with Will Connors ready to spring from the bench (don't be surprised if he still manages to crack the top 5 tacklers btw) we could definitely bring an early lead home.  I’m going for a 7-9 point home win, like I said, once we start with the right mindset.

Be sure to join our post-match discussion on our Facebook page from 9pm.

📄 𝗧𝗲𝗮𝗺 𝗨𝗽𝗱𝗮𝘁𝗲 ☘️ Iain Henderson and Jacob Stockdale have been ruled out of tonight’s #GuinnessSeries game against Wales.