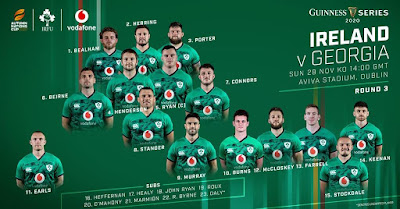 And there I was, really looking forward to a "double header"...was going to have the "main telly" to myself so I could settle down for this match followed by what could have been a very tricky Pro14 encounter for Leinster at Parc y Scarlets.

But alas despite the lockdown relief afforded by the Irish government on Friday night, COVID19 still has an affect on everyone's lives and my Sunday afternoon plans are, of course, among the least important of all so I hope those who tested positive at the Llanelli region are back up and running soon.

When it comes to the test match, while I did my best in writing up last week's defeat in Twickenham to counter the negativity in Irish opinion, there's absolutely nothing we can do on Sunday that will satisfy the doom merchants so it's probably best I ignore them altogether this time.

The opposition might be "lower tier", but it is still a very strong Irish lineup and with each match selection it is becoming increasingly clear what kind of ideal lineup Andy Farrell & co have settled on since taking the reins.

After a long struggle against the English D eventually it was a neat combination between Ulster teammates Billy Burns and Jacob Stockdale that put us on the board and both are rewarded with starts here. And with the success that Dan McFarland's squad have enjoyed in recent times the opportunity is well deserved.

When it comes to Stockdale, I will repeat my assertion that they seem determined to see him succeed in the 15 jersey so hopefully he will start to click there. It would certainly seem odd to play him in this match only to make another change the following weekend (probably against Scotland) so hopefully he can use this opportunity to improve his confidence there further.

As for Burns, it will be interesting to see how much his performance plays a factor in his retaining the number 10 jersey the following week, perhaps the timing of the introduction from the bench of Ross Byrne will provide a sign.

Continuing the theme of starters from Ulster, Iain Henderson's involvement will provide a good amount of cover for skipper James Ryan, who possibly had a little too much on his plate last time out what with leading the side from the kickoff for the first time, calling the lineouts and of course the whole Maro Itoje-ness of it all. Having just the first to focus on this time out will certainly give him more room to breathe.

But the most significant Ulster starter has to be Stuart McCloskey. Few can deny he has always been a strong (literally) contender to wear green 12 but that said there were also many strong options ahead of him. Now he has a chance to make an impact and having a familiar face at out half will no doubt help.

To finish my northern province theme I'll mention one who hasn't been involved in this series - John Cooney. I was fully behind Jamison Gibson-Park's elevation based on recent form and I am also glad to see Marmion is far from out of the Irish equation but Cooney has to be there and thereabouts as well, with Craig Casey lurking in the background too. All of which has me wondering if starting Murray is a bit of a waste for a match like this? There is a "leadership group" argument to be made I suppose though there are many others already ticking that box.

Anyway...going back to the pack, it's an interesting back row choice with Will Connors no doubt tasked with chopping down on rushing Georgians for both Tadhg & CJ to jackle into oblivion.

When it comes to our opposition, I said against England that it didn't really matter what happened on the other side and I say the same thing here, only for different reasons. Ireland need to go out and perform with all systems running. This is their fifth match together so it's vital that we make the most of this fixture to show signs that we can both solve problems and settle into our own patterns quickly.

The bookies have offered a 37-point spread, just a few shy of the margin England put on them only a couple of weeks back. You could say that's more of a comment on the Lelos than us, but I think it demonstrates a confidence in our ability to at least put on a show for Irish fans, and I for one and backing them to do just that and at very least hit that target.

That's not to say it will be easy - the Georgians will certainly test us in specific areas so it will be up to us to pass them. Here's to a much better day at the office. JLP