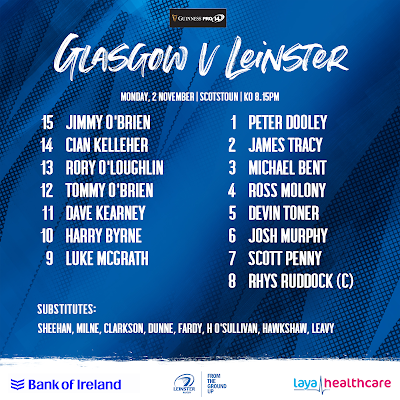 If you asked me a year ago what I thought of that for the Pro14, I’d have said no way, which is unusual for me since I normally give out about rugby’s tendency to lean towards “harrumphery” when any changes are recommended.

And to be honest, I was only ok with it for this season because of COVID.  With no crowds and particularly in Level 5 stretching out the sporting weekend by a day or two is definitely appreciated, though my proviso would be that once fans are allowed back in the grounds, we need to go back to Friday/Saturdays asap for the sake of fans, local businesses and, dare I say it, “normality”.

However, after what happened in Paris last night, I’d have welcomed Monday night rugby with open arms, pandemic or no.  Especially with the novel announcement of the starting lineup at Sunday lunchtime - that was just the distraction I needed.

And it’s an impressive team - very similar to that which mauled Zebre last week, all the way down to Dan Leavy donning the 23 jersey in another 6/2 bench.  The unit with the most change is the centre where Rory O’Loughlin returns at 13 to be partnered by Tommy O’Brien who starts in his third different position in his short senior career.  I expect them both to bring much physicality to our midfield, something they’ll need against an impressive looking Glasgow back line.

The pack is identical from the last round bar for James Tracy who starts ahead of Dan Sheehan.  With Ruddock as skipper Fardy also in reserve we should bring a lot of beef up front for the full 80 minutes.

On Glasgow’s side of things, I spoke to one of their biggest fans David Arnott on my podcast during the week; click here to catch the full chat.  They started well in their last match against the Ospreys but could press home their early advantage and were gradually worn down by the accurate boot of Stephen Myler - we need to be mindful of that when we ourselves go to Liberty Stadium next week.

But that disappointment only means they’ll be more eager to put one over on us here, and like I said earlier, considering the test players are still out of the equation it’s a quality lineup throughout, even with Peter Horne at 10, whom I have oft said isn’t suited in that position, with our last match before the original lockdown being a case in point.

One change of note to the starting lineup sees Niko Matawalu starting, and according to David Arnott the Fijian still has every bit of his pace, so our lads need to be mindful to keep broken play situations to a minimum, and it’s not as though Tommy Seymour and Huw Jones are incapable of causing problems either.  If the likes of Harry Byrne and Jimmy O’Brien remain accurate with their kicking we should be ok.

Basically I’m looking for a continuation of the good team performances we’ve seen from Leinster this season so far.  That’s not to say I’m expecting us to keep up our average winning score of 45-13, but I definitely feel we should have enough on the night at least bring home four match points if not more.

The bookies have us pegged for a 5-point victory, I reckon they have it about right but I’d want to push them to try and deny the home side the losing bonus.  That could be a tough ask but if our forwards get on the front foot early it’s doable so I’m going for an 8-10 point win for the visitors.  I suppose our winning run in this competition will have to end eventually, but you certainly won’t see me predicting it!!!

Here’s to a good night of rugby and best of luck to the Ulstermen in the earlier kick off.  JLP