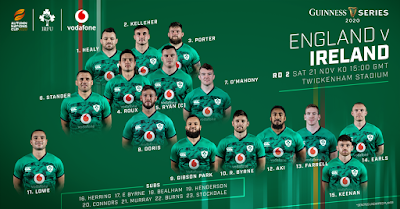 “The big moment of that game, I remember it well, James Ryan was playing and he went to Bill Johnston and was like, ‘stick the restart on (Welsh number 8) Harrison Keddie’. James tore after it, hit him man and ball, got a knock-on and I think we scored a couple of phases later. That was one moment that really stood out for me in that game and then I think we got on the front foot then.”

That moment, described by Hugo Keenan in a recent Irish Times article, is one that also stood out for me.

It was Ireland's opening match the 2016 Junior Rugby World Championship, and after just 20 minutes we were 17-0 down.  Ryan was skipper and issued the order described above by Keenan while the team was under the posts waiting for the conversion after the third Welsh try.

Unfortunately I can't retrieve the Vine I posted of that moment but below you can see a similar inspirational smash from the lock that helped us not only to victory that day, but on a path to the final which included a victory over the Baby Blacks in the next match.

James Ryan's ability to get off the line and win yards for his team is always impressive. Huge defensive appetite. pic.twitter.com/Q2RuZZHRgQ

As a sidenote, in the matchday squad with Keenan and Ryan for the Ireland Under 20s that day in Manchester were Andrew Porter, Max Deegan, Shane Daly, Conor O'Brien, Jimmy O'Brien and at fullback, wait for it, Jacob Stockdale.
But it was not to be a fairytale ending to the tournament for the Irish boys in that campaign, as we fell to the host England team in the final. So in many ways it's fitting that James Ryan gets his first taste of the test leadership we always knew he had in him at Twickenham this Saturday.
Of course no matter how much he has shown himself to be a leader by example in the past, it doesn't make this weekend's task any less daunting. He's not just leading us out against the newly crowd Six Nations champions, his leading us against a narrative which badly needs correcting, and I for one will be more than happy if that latter box is the only one that gets ticked on the day.
We all know of this trend. And Leinster players know it even more since as goes the Irish against England, so goes the boys in blue against Saracens. Apparently when the opposition brings the beef, we can't front up.
Does this mean I don't believe we can defy the 12-point spread towards the home team offered by the bookies? Of course not. I guess I might be too wary of the type of negativity that emanates from the ruggersphere after any manner of an Irish defeat, from our own "fans" no less.
OK before I harp any more about what a defeat might look like, let's look at ways we can win, because they do exist. First of all our pack is full of players well able to stand up to the physicality. Healy, Roux, Stander, O'Mahony are all well able to get behind their skipper and mix things up when required. And it's not like we're without a decent dose of attitude in the backline either...for example, we all know James Lowe lives for big occasions like this one.
So assuming we match them for muscle, how do we triumph with tries? Sexton's absence cannot be ignored, but Ross Byrne has proven time and time again he can bring it for the big occasion and with all due respect to Conor Murray, it could be argued that his regular starting role for Ireland might be the key to England "having our number" in recent years, so with Jamison Gibson-Park involved from the start, our hosts might be forced to look for a different number altogether.
In Bundee Aki and Chris Farrell we might not have the footballing flair some might say we need in the team in general, but I reckon we can make a strong "horses for courses" argument for their inclusion on Saturday even if they are proably only there because of injury to others.
And while I've already mentioned Lowe when it comes to physicality, we know he also has a tendency to get on the end of try-scoring moves, and many of those don't even look like try-scoring moves when he gets the ball. Alongside him in the back three I'm glad to see Hugo Keenan kept at 15 and while I reckon Andrew Conway probably deserved to stay in the squad, it is also good to see Keith Earls's experience returned to the XV.
The bench is always important of course, but for a match like this their effectiveness is really only dependant on what kind of match situation faces them when they enter the fray. Hopefully we'll be in a position to need some fresh legs to help us bring a lead home for the final quarter, and Will Connors' chop tackles certainly wouldn't go astray in that time.
As for our opposition, well, they're going to do what they're going to do. In fact, in some ways the tables are turned in that they are the ones with familiar faces in key positions so maybe there's a way we can use that to our own advantage.
But what we need most of all is a sign that the lads are willing to rally behind Ryan and put to bed once and for all the assumptions that the vast majority of observers will bring with them. "Makey-uppy competition" or no, this is a very big match for Andy Farrell's Ireland. And while I'll defend them to the hilt if they fall despite having made a decent fight of it, that's not to say I don't believe we can do it.
Here's to James Ryan leading the boys out like they're 17-0 down and getting stuck in early on to show it can be done. I know I believe it. Heart over head bedamned, I'm saying we'll come out on top by a few points in a scrappy encounter. It's 2020 folks. We need this, and what's more, we can get it. JLP
England : 15 Elliot Daly 14 Jonathan Joseph 13 Ollie Lawrence 12 Henry Slade 11 Jonny May 10 Owen Farrell 9 Ben Youngs
1 Mako Vunipola 2 Jamie George 3 Kyle Sinckler 4 Maro Itoje 5 Joe Launchbury 6 Tom Curry 7 Sam Underhill 8 Billy Vunipola
16 Tom Dunn 17 Ellis Genge 18 Will Stuart 19 Jonny Hill 20 Ben Earl 21 Dan Robson 22 George Ford 23 Max Malins.
Autumn Nations Cup - Round 2
Saturday, November 21, 2020
KO 3pm
Twickenham
Referee: Pascal Gauzere (France)
AR1: Mathieu Raynal (France)
AR2: Alex Ruiz (France)
TMO: Nigel Owens (Wales)
Live on RTÉ Two, Channel 4.
at November 20, 2020