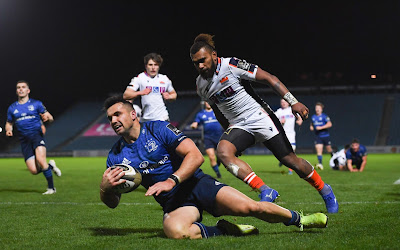 I keep falling for it. That little voice inside that tells me this is the one where we'll come unstuck.

Of course I mean no disrespect to any of our opponents so far in this young season - Dragons, Benetton, Zebre, Glasgow, Ospreys and now Edinburgh. All have given us tough battles over the years, it's just right now, our mix of next gen players and experienced heads is has been head and shoulders above all before them so far this season.

As you can see from the post-match comments at the bottom of this post, these results invariably raise questions about the validity of the competition, both for Leinster as an organisation and the league as a whole. I intend to discuss that on this week's podcast with some fellow fans so be sure to subscribe to check that out.

In the meantime, this is a match writeup so what say I crack on with writing up the match. Given the two match per weekend nature of this portion of the campaign I have to keep things relatively brief so what I'll do is harp on the individual tries.

Edinburgh kicked off with exactly the amount of physicality I expected - enough to make us struggle to escape from our own 22 after the kickoff, to be precise.

But once we did, the attacking patterns began to emerge. Despite the comfortable win against the Ospreys, Harry Byrne was put under a good bit of pressure to produce creatively, and with Ciaran Frawley outside him at 12 we knew he had an alternative, but it wasn't long before we realised there was also a third option.

Jimmy O'Brien has been one of the most consistent performers in this spell of matches and as well as performing the standard full back duties well enough to be allowed in the equation alongside Larmour & Keenan, he's not too shabby with the boot either.

First a territory kick up the touchline that pinned Edinburgh back in their own 22 (the move having started back in Leinster's), and when Dan Leavy nicked it back to get us on the front foot, rather than give the defence time to settle, Jimmy instinctively grubbered one through for Dave Kearney to pounce on and get the scoreboard rolling.

Again it was Jimmy O'Brien getting the move started, this time in a more traditional full back sense by catching a box kick and running strongly back at the opposition to get us on the front foot.

From there we quickly shipped out into the wide channels where Dave Kearney found himself matched against an Edinburgh lock so having breezed past him he was able to fix the next tackled and ship it inside to Luke McGrath, who has a sixth sense for these kinds of situations, and that was try number two.

We possibly condeded more penalties on the night than we'd like, but then again so did our visitors and one series of them in particular put us right on their line. Nowadays the tap penalty option is being used much more frequently so after a couple of attempts including Dan Leavy being held up, it was Peter Dooley who got it down, albeit with a little help from his many latching friends.

Fittingly the try of the night was the one that secured our sixth bonus point from six matches. The clock was winding down in the half but we weren't for resting yet and although Ciaran Frawley bobbled the ball a bit first, he recovered enough to be able to flick up a pass in the act of falling over to his support (again Luke McGrath, of course). It was reminiscent of Peter O'Mahony's recent highlight against Italy.

So we had the bonus point, we had the highlight reel try, and let's face it, we had the win. What was the match lacking? How about a try from Dan Leavy, who was starting his first match in what seemed like a gagillion years? No problem.

Yet again we were able to move the ball quickly through the backs to find enough space to become camped on the Edinburgh line, and although their rearguard did it's best to keep us out, once Leavy got himself half a chance there was no stopping him.

Five tries on the board, and not one yet from Cian Kelleher, who as you'll probably know if you've seen any headline, ended up with a hat-trick. The first two came with a bit of extra space after Edinburgh winger Eroni Sau was sent to the naughty step for a deliberate knock on.

We were rolling through the phases following the lineout in the 22 when a penalty advantage was called for a no-arms tackle and this time it Harry needed no creative help in opting for a precision kick pass into the corner which was gratefully pounced on by Kelleher.

Almost identical to the previous try, only this time Harry chose to pass rather than kick and Jimmy O'brien was on hand to get it the rest of the way to Kelleher and the net result was the same for Leinster.

I tend to say this a lot in these matches "credit to our opponents for not giving up". And to be fair, it's true. Edinburgh did have a purple patch of sorts, albeit far too late. But although Henry Pyrgos was their skipper on the night from 9, his replacement Nic Groom did seem to raise their production levels a notch and on a quickly tapped penalty he was the one bringing it over the line himself.

The "Player of the Match" gong was awarded to Leavy, and there can be no doubt he made an impressive return, but still I disagreed. I thought it should have gone to Jimmy O'Brien, who wasn't done unlocking the Edinburgh defence because it was thanks to his super quick hands that Kelleher was put through for our eighth try of the night which also brought about the "fiftyburger".

Of course there were other performances of note, like Frawley (though he might lose marks for a few missed placekicks), James Tracy (really putting his hand up for European involvement) and Luke McGrath, but Jimmy was the stand out man in blue for me. It was also good to see Ryan Baird back in action and hopefully it won't be long before he's back in queue banging on the Champions Cup door.

When it comes to the Pro14, we might be 30 for 30 in the match points column but the only stat that really matters is the slender 2-point margin we have ahead of the Ulstermen in 2nd spot so we will have to keep this run going to stay where we are.

When it comes to Europe, now the fixtures are known we should probably start thinking about what kind of team we'll be putting together when we have our full squad availiable, By an amazing coincidence, I will also be harping on that with my podcast guests this week so stay tuned for that as well.

In the meantime, check out the highlights from this match when you can. During the match I tweeted that we could be called the Ballsbridge Globetrotters...I sort of hand tongue in cheek, but the name gets more appropriate with each new performance and result like this one. JLP

******
We normally do a separate post featuring online comments from the full time whistle but due to the quick turnaround for the writeup we'll add a few here instead - many thanks to all who contributed as always!
Conor Cronin Heads up, offloading, running rugby. It's a great pleasure to watch. Young lads working hard to put pressure on older lads, older lads setting a standard. Dan Leavy clearly coming back to great form. Ryan Baird reminding us why he should've been with Ireland. You just love to see it!
More penalties than one might like to see, but a good video session and some good feedback from the ref and that could be tidied up.

Unfortunately doesn’t say a lot for the state of the Pro14. Incentive to watch games diminishing as results are a forgone conclusion. Shows the Irish development system is strong but what are the other Celtic unions doing...

Paul Smith A few handling errors and some bad penalties given away but when we clicked we were awesome. Some superbly taken tries and some fantastic skills on display. Delighted for Kelleher on his hat trick and how good is it to see the name Leavy on the scoresheet again. Big call out too for Luke McGrath who was MOM for me. Brilliant performance from him.

That was a hard watch. Hopefully the young lads getting some game time will benefit from this in long run. Ally Miller still a standout for Edinburgh even in adversity. #alwaysedinburgh

Richard Mifsud Another big performance against a not insignificant Edinburgh side. Our speed of passing, the angles, the offloading and the sheer diversity in attack is mesmerising to watch and an absolute pain to defend against. To this we must add the tenacious defence. Expected more from Edinburgh TBH but they just couldn’t cope with us. Another highlight for me is the speed and accuracy of our transition from defence to attack. Standouts for me Jimmy O’Brien (again), Luke McG, Harry, Ciarán Frawley, young Master Leavy, Rhys and Cian Kelleher. Starting pack generally very good and dynamic finishing props need more experience. Would like to see the Hawkshaw O’Sullivan combo get more game time. All in all a great win with brilliant tries

Terry Mitchell Not to get carried away because the consultation competition to the Heineken cup to be honest ,but the way the team turned defence into attack resulting in scores on the board ,did look like the all blacks in blue magnificent to watch

The PD of the top two in Conf A 😮 pic.twitter.com/G75H5qurq2

Gerald Williamson Great work among the forwards. Good to see Dan back. Some deft touches from Harry Byrne putting the Edinburgh defence on the back foot.
David Lawlor Poor Cian Kelleher must have thought he was a shoo in for MOTM after scoring a hat trick

Nothing at all, but its a big problem going into Europe and for Ireland - we have no idea how good these players actually are.

David Ryle Great to see more than one playmaker on the pitch. Keeps the opposition guessing.
Chris Bond Too good

No complaints, definite highlights were Leavy/Baird appearances. But many stand out displays from the liked of Tracy, Frawley, JOB and of course the hat-trick hero Kelleher. Nice set of headaches ahead for Leo & co putting a 23 together for Europe #LEIvEDI