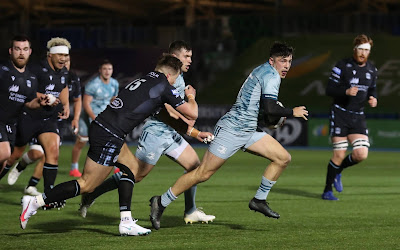 🚨 WARNING - THIS WRITEUP IS A NEGATIVITY FREE ZONE 🚨

With that weekend of test rugby behind me and a stressful week of vote counting in my country of birth ahead, I don't care how easy (if dated) a reference my title might be - it fits here because my first taste of Monday Night Rugby was absolutely 100% PER-FECT in every way. You'll just have to trust me when I say I'd feel the same had the Warriors won!

So it's nothing but happy talk for the remainder of this writeup, of that you can be guaranteed. Even the steady rain didn't dampen my spirits and why should it since it didn't seem to bother the players at all.

This will be one of those "timeline" formats where I review the match in 10-minute chunks as I rewatch.

Interesting exit strategy by Leinster with the newly returned from injury Rory O'Loughlin nominated to swing a big right peg at the ball to clear to the opposite side of the pitch each time and this was the first of many in the early stages with good distance.

His second attempt from regular play was blocked however and we needed a jackled penalty from Scott Penny to stop the Warriors from getting into their trademark pick and go groove. A Jimmy O'Brien knock on at the 22 put us in a similar situation but he was then rescued in similar fashion, this time by his hooker James Tracy.

Eventually we worked our way to an attacking setpiece of our own with a lineout at their 22. Josh Murphy took one off the top, Tommy O'Brien crashed his way into the 22, and a few phases later Harry Byrne offloaded to Jimmy O'Brien who broke away under the posts, 7-0 after 10m.

If I was being negative I'd question whether Niko Matawalu's quickly taken lineout went 5m but instead I'll focus on the vintage Glasgow Warriors series of attacking rugby that followed. I counted 18 phases starting in their own half with slick passing, quick pick and gos and physical support at the breakdown until George Horne cantered over to level the scores. Try of the match to be fair.

The pace had been frenetic, and after one quarter it honestly looked like anyone's match to win, but ironically it was a Leinster error, namely Ross Molony knocking on in the tackle that provided the turning point in our favour.

A mahoosive shove from our scrum gave us a penalty that was worth way more than the three points Harry Byrne went on to slot over the bar to restore our lead.

We had a penalty advantage at halfway but didnt need it as Tommy O'Brien and Scott Penny combined to get us to the 22. Having won another penalty, we mauled to the line only to be held up and with our scrum having made a statement, we won another penalty from 5m out and it was Luke McGrath, playing like someone wanting to make his own statement to Andy Farrell, took a quick tap and got to the line. 17-7 to Leinster.

Even when we were under a bit of pressure in our own half from our own scrum put in, Luke McGrath was able to turn it into front foot ball and soon after we were winning a penalty in their 22 which we dispatched to touch. From the lineout we made it look way too easy, with Scott Penny peeling off the maul with Tracy latching to nab try number 3. Given my positive theme, I'll assume Harry Byrne missed the conversion just to prove to us all that he's human!!!

Another scrum penalty before the break secured our scrum dominance and going into the dressing rooms the only thing we were missing was the bonus point.

Full credit to the home side they came out for the second half with every intention of making it back into a contest. Off an attacking lineout at our 22 a neat switch move got Matawalu 10m from our line, and after hopping back on the phase train eventually it was Darcy Rae crashing over making it 14-22.

I couldn't help but make a clip out of the referee catching an inside pass from Harry Byrne, not only for the sheer "Ben Whitehouse-ness" of it all, but also for the subsequent "mock" charge by Glasgow 7 Tom Gordon.

But the result of the play was a penalty which we dispatched to touch in the Glasgow half, and this time O'Loughlin did get his hands on the ball, spotting a dog leg which allowed him through all the way to the line. He was well tackled by Huw Jones but the full back proceeded to impede at the breakdown to get himself a yellow card.

Once more we quick tapped the penalty and after a couple of rumbles at the line Michael Bent, one of the heroes of our scrum success, got himself a try that provided the bonus point.

The only 10-minute spell with no scoring, and since I'm being positive I won't even criticise the Warriors lineout during this time, instead I'll praise our boys for doing well to disrupt their set piece. And to be fair, Glasgow did pretty well during this time to play mostly in our half considering they were a man down.

Our turn to see yellow when Cian Kelleher got sent to the naughty step after a high seat belt type tackle. From the resulting penalty they kicked to touch and Tom Gordon emerged from the maul to power his way to the line - he had a latcher but didn't really need it, he was that determined. Now the margin was just 10.

Harry Byrne kicked a penalty to kill some time and pad the margin a bit more, and although the Warriors never stopped trying for a try before the end which could have nicked up to two bonus points, our bench which included Scott Fardy and Dan Leavy (and also David Hawkshaw finally making his debut, congrats!) was well able to hold them out.

Luke McGrath and Michael bent were good contenders for Player of the Match yet the eir Sport team were probably right going for skipper Rhys Ruddock who put on yet another powerful display, from number 8 this time.

The award sparked a debate among Leinster fans on twitter as to whether he should have been wearing green last weekend. Personally, I'd love to see him in the national set up and he was definitely one of Ireland's better performers in Japan, but still I reckon suggesting any back rower is a nailed on starter for Ireland right now is folly. There isn't a single trio plus one you could name that would leave a top qulaity player out. Still, with the Autumn Nations Cup on the horizon, Ruddock has certainly done plenty of late to earn a shot.

Right, that's it, not much more you can say other than express happiness at 4 maximum wins from 4 to start the season! Long may it continue!!! JLP

We normally do a separate post featuring online comments from the full time whistle but due to the quick turnaround for the writeup we'll add a few here instead - many thanks to all who contributed as always!
Richard Mifsud  I’ve said it many times before I absolutely love watching the young guns playing. Their fluidity and freedom are an absolute joy to watch. Among those youngsters were obviously very experienced heads in the right positions and that blend of experience and youth is a luxury. Like Conor I was expecting a win, which isn’t arrogant it’s simply the level we’re at, at the moment. A very professional performance and to get a BPW at Scotstoun against a strong Warriors side is nothing to be sniffed at. Standouts Rhys, Harry Byrne, Tommy O’Brien, Cian Kelleher and the opening front row. On to the next challenge over and out.
(later) My bad should’ve mentioned how brilliant Luke McG’s reaction to being dropped by Ireland has been. He will have grown up from this and he will become an infinitely better player for it 👏🏻#COYBIB

Conor Cronin  Last season we all thought this game would be a loss, today I certainly looked at it glass far more than half full, an absolutely winnable game. And then they take home a BP as well! Great result for the young lads to build confidence under the watchful eye of some of the older and more experienced heads.
It won't go down as one of those epic games, but it doesn't need to if you get the win!

Gerald Williamson Leinster went to Glasgow, they won and got a bonus pt. Rhys Ruddock was a deserving MOTM, but was closely followed by a few other contenders. I have predicted this before, Harry Byrne is a future No 10 for Ireland with a bit more experience. Wait and see his time will come.

Glasgow is a tough place to go to and win. To go there and get a bonus point win...

Gav Heg There was maybe 20 minutes pre game when for the first time in what must be years Leinster were not top of their pool!
Job done, not the best game by any means but we made Glasgow look terrible. I still maintain benty is one of leinsters greatest. Never puts a foot wrong and always reliable.

I feel for Danny Wilson. He’s a good coach and I think he’ll be a good coach for Glasgow but he’s come in under some pretty tough circumstances. Covid, bulk of the squad on international duty almost instantly, a lightweight squad and trying to get your style across. Tough times

Henry Sellars Great game of rugby considering the godawful weather. Beginning to think Ross is squirming with the performances Junior is putting on....
Jamie Donohoe Leinster are a pure pleasure to watch💪💙

5 points away in horrible conditions, I'll take it any day. POTM couldve been Bent, Luke, but capt Ruddock a worthy winner. Credit to Glasgow for persisting, mightve nicked a BP. Overall it was just what I needed after that weekend just gone. #GLAvLEI #GuinnessPRO14