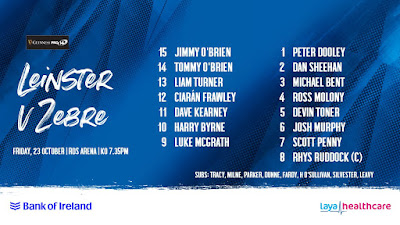 Just in case your brain ejected it from your memory (and who’d blame it in fairness), that match finished 3-0.  The joke scoreline that normally only ever gets mentioned in senior rugby when fans precede it with the words “I don’t care if we only win…” and follow it with “...once we win.”

And there wasn’t the context of a prolonged winning streak for us back then either.  As Leinster fans we still had St James Park on our minds and as Ireland fans, the memories from Ajinomoto Stadium were even fresher.  There definitely wasn’t a whole lot to celebrate come the full time whistle that day.

Little did we know, however, that just under a year later we’d be delighted to have both Leinster & Ireland rugby being played at all in the same weekend, even if both were in Dublin and we couldn’t attend.  With all that’s going on right now, this is definitely something to be thankful for.

In our podcast during the week I spoke to Italian super fan Andrea Tronchi who talked about how Michael Bradley had worked so well with his Zebre squad over the past few seasons to get them to a stage where they can play Leinster (whom he says most Italians dub “the All Blacks of the northern hemisphere”) without fear.

So it’s safe enough to say they won’t be going to D4 to make up the numbers, nor will they be satisfied with another low-scoring defeat.  And it’s not like they’ll be unfamiliar with us, especially when you see their starting second row comprises former blues in Mick Kearney and Ian Nagle.

Actually, Andrea listed five players he feels are definite prospects coming up through the ranks at Zebre, and none of them feature in the matchday squad, so when you consider it’s an international weekend, that must bode well for their talent levels and they should be competitive.

But what of our squad?  Well it’s not like we’re without a host of prospects ourselves; in fact we’ve built our reputation on having one of the best conveyor belts in Europe.  There’s plenty of recent graduates on show tonight, like Harry Byrne, Scott Penny and Tommy O’Brien, all of whom have shown us what they can do at senior level.

There’s also a decent amount of fresh faces to the lineup, like hooker Dan Sheehan and outside centre Liam Turner.  On the bench there’s Ciarán Parker and David Hawkshaw ("TEAM UPDATE: David Hawkshaw has been ruled out of tonight's game with an adductor strain picked up at yesterday's captain's run. Michael Silvester will take his place on the bench.") - all would be making their debuts for the province and best wishes to all.

What’s that?  Is there any experience to help those youngsters along?  Well how do names like Dave Kearney, Devin Toner and Luke McGrath grab you, to name just three?  And with the last one there extra keen to prove himself having watched “Whiskey” overtake him at both provincial and test levels?

Altogether it’s quite a squad for skipper Rhys Ruddock to be able to lead out onto the RDS turf, and with names like Scott Fardy and the finally back from injury Dan Leavy (there was excitement from fans of all provinces at this news, great to see) to spring from the bench, there’s more than enough out there to at very least match anything our guests plan to throw at us.

If I was to pick out one player I’d be looking out for most of all it’s probably Ciarán Frawley at 12.  I think he can do extremely well for us there but he’ll need a good run there after his unfortunate collision with Jamie Roberts in round 1 (and yes, it was unfortunate - maybe the timing was a fraction off but I contend it could happen to pretty much anyone against an opponent like JR).

With all of this going for Leinster, you have to expect us to take a decent stab at the 36-point winning margin with which the bookies have burdened us.  So many players aiming to make a good first impression, so many coming back from a dip in form or from injury, and such a good coaching ticket behind them - let me put it this way; we’ll be expected a few more than 3 points on our side of the scoreboard!!!

I’ll afford them a bit of leeway with my prediction in that I reckon a margin in the high twenties will be in the ballpark of “job done” once the squad is managed well.  All in all I’m hoping this will be a perfect way for us to start a Six Nations weekend - how great it is to type those three words!!!

Be sure to hop on our Facebook page after full time to let us know what you thought - see you on the other side!  JLP