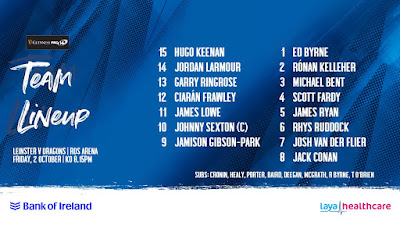 It seems like a long, long road to that fifth star but to tack on another cliché, every journey begins with a single step and this is how Leinster have to be looking at the 2020/21 campaign as it kicks off.

On this week's podcast I was joined by three fellow Leinster fans and we agreed that while a 4th succesful league title would of course be awesome (whatever the name of said league might be), it really is all about getting back to and winning that Champions Cup Final.

And whatever about our opponents on the opening weekend, this matchday squad really does look to be one that is intended to send a message to the rest of European rugby : "We're still here, lads."

Now I know part of the reason we have the Sextons and Ringroses taking part is to keep them match ready for Ireland's many exploits before the year is out (the hope was that they'd have been playing last weekend which might have led to a completely different selection here), but still it's good to see such a strong lineup returning to the RDS turf, although that does bring with it a significant challenge.

The Dragons lineup isn't too bad.  Roberts & Tomkins in the centre, Moriarty at no 8, Hibbard & Screech on the bench, and I'm sure there are a couple of youngsters which will be keen to impress.

But let's face it.  THIS Leinster squad, coming off the back of THAT last performance will need absolutely no motivating to go out there put on a display to keep us fans happy especially given we can't be down in D4 cheering them on.

Obviously the set pieces are going to be the first concern.  In fact, I could almost go as far as to say that if we win our own lineout throws and manage to avoid penalties at scrum time then the kind of big victory we're looking for could almost be guaranteed.

I suppose a lot of the attention will be on Ciaran Frawley at 12.  In his few appearances there he has done well and it will be interesting to see how he slots in between his illustrious 10 and 13 either side.  Also I hope if we can afford to replace Ringrose in the second half then Tommy O'Brien will have time to show what he can do at outside centre he is poised to be another big Leinster breakthrough this season.

Jamison Gibson-Park getting the nod at 9 raised my eyebrow, though only a bit.  Good to see form playing a part in selection and since the COVID break he has definitely done better than McGrath, though few will doubt that Luke will rise to this challenge once he gets the chance.  This would also be a good chance for JGP to get Andy Farrell's attention.

Then there's Scott Fardy.  He too has been below his best (though that's still pretty damn good) so we'll see how he responds.  Really the only plan I can imagine the Dragons having is to mix things up in the forwards so the Aussie is just the right guy to have in those conditions.

You could say the bookies' spread of a whopping 27 points in our favour could be a decent target for Leinster to aim for, but with all due respect to our visitors tonight, I reckon we have to go beyond that.  We need to dominate, we need to show our overall systems are functioning, so we need to take every chance we can.

We tucked in to a "fifty-burger" on their last visit in Nov 2019, with a 35-point winning margin, so for me, that should be our target.  Those are the kind of standards you set when you win a title unbeaten.  I can't wait to watch these lads live up to them, though with an 8:15pm kickoff, I guess I'll have to!!! JLP

PS - Remember to hop on our Facebook page after the fulltime whistle to leave your thoughts, we post the best ones here every Sunday.