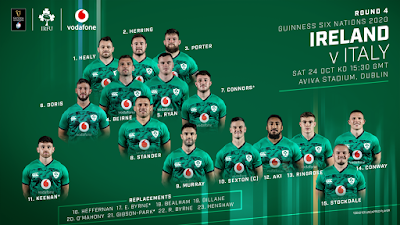 Had a great time Thursday evening hosting a Facebook show for Three Blokes A Ball & BOD where I got to chat to Jeff Neville from The Loose Head and Stephen Murphy from Master of None about the Ireland v Italy clash.  Be sure and check it out here.

Overall the mood was extremely positive, not just for our chances this Saturday, but also for winning the Six Nations title itself.  It’s great to hear such optimism from fellow Irish fans, particularly with the World Cup and Twickenham still fresh in our test memories.

And I’m certainly not disagreeing with them.  We most certainly can get the results we need to finish on top, and that should most certainly be our goal, even with injuries and suspensions depriving us of key players.

I should probably start with arguably the most contentious selection, that of Jacob Stockdale at full back.  Personally I don’t buy in to the whole “he can’t defend” narrative, it’s not that simple (it never is).  But even if we accept that, it has been pretty clear that since the COVID break this is something the Irish coaching ticket has wanted to try.

Rob Kearney’s retirement meant that a long term successor needed to be found and with Larmour having wobbles of his own of late, Stockdale switching to 15 at Ulster meant he put himself in the frame and with many other credible options available like Conway and Shane Daly, they still went with Jacob.  I say we give him every chance to prove the defensive doubters wrong.

On the other wing, how great is it to see Hugo Keenan’s rise and rise continue.  We have seen nothing from him to suggest he’ll do anything but take this chance with open arms, and with Conway on the other wing we have ourselves a very potent attacking back three.

In the centre I would have thought the Henshaw/Ringrose axis was pretty much unbreakable, but Bundee Aki had other ideas and you won’t hear any complaints from me.  As for Garry this is the sort of game he should be taking by the scruff of the neck so the Italians should find movement up the middle very difficult in both directions.

Now for the big 9 debate.  Look - we shouldn’t be surprised at Murray’s inclusion.  There have been loads of other 9s in the game putting up their hands of late and it’s great to see one on form, Jamison Gibson-Park, getting his chance on the bench.  But if the coaches see on the training pitch that the Murray/Sexton combo is the way to go over these two key weeks, that’s enough for me.

Now to the pack - Rob Herring has been good for Ulster getting on the back of short lineout maul situations, something we could use to our advantage if we’re going to be spurning three-point chances in the hunt for a bonus point.  And in the second row Beirne and Ryan could very well prove to be a partnership that will be difficult to break up.

But in the back row, an area where Ireland have seemingly limitless options, I can’t help but be excited to see the teaming up of Will Connors’ chop tackle and CJ Stander’s jackling.  Like many have said, Josh van der Flier is as perfect an all-round 7 as you’ll find in modern rugby and has done nothing wrong, but in a team that relies heavily on fashioning turnover situations, this could be a dream trio all going well, especially when it’s rounded off by Caelan Doris who deserves another shot at this level.

On to the heavily-Connacht-influenced bench.  Some have questioned Peter O’Mahony’s place with so many other options for the 20 jersey - for me, I’d want him in the dressing room inspiring those around him, let alone the actual ability he brings to the team anyway.

As for Ed Byrne, it’s a great opportunity for him, and it won’t hurt to have a familiar face in the 1 jersey to help him through such a massive day.  And with Ronan Kelleher unavailable it’s an excellent chance for Dave Heffernan to show his worth to the squad, especially if we are still chasing a 4th try when he’s introduced.

In fact that last point applies to the entire bench.  The hope would be that we have the BP wrapped up early enough to rest Sexton at the very least for the following week’s trip to Paris, which means the Gibson-Park/Ross Byrne pairing would get some decent gametime in green.

What of the Italians?  Well on my podcast during the week, superfan Andrea Tronchin spoke of how they need to find an identity, and this could involve moving away from a reliance on forward play.  This could definitely happen for them and their still relatively new coaching ticket, but I wonder if we’ll see it over the next two weeks.

They’re going with the young Garbisi at 10 and he definitely impressed in patches for Benetton against Leinster the other week, but given they are 28 point underdogs according to the bookies, I’d be surprised if we saw anything but a more conservative approach to remain competitive as deep into the match as they can.

So to summarize I share the upbeat opinions of my fellow panellists from Thursday and full expect Ireland to get the job done this weekend.  I don’t particularly want it to be too flashy - I’d be more concerned with our getting the most out of the full 23 so we can have a similar lineup the following weekend.

For my prediction I reckon we might fall short of the bookies expectations but still earn the BP early enough and get a decent winning margin of about 19-21.  As always it’s a shame we can’t be there in person to watch but I’m still really looking forward to see the Six Nations return - best wishes to Adam Griggs, Claire Griffin and the women’s team as well playing later that evening.  JLP