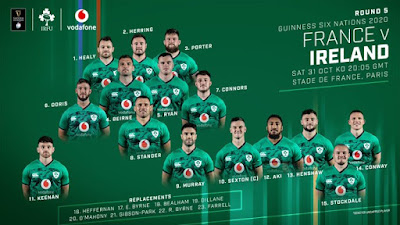 They say a full moon brings out the weirdos.  Imagine what comes out of the woodwork when a full moon happens to fall on Halloween night.  Hopefully on Saturday the “trifecta” won’t be completed with an Irish defeat to persuade the zombie army of Irish rugby begrudgers onto Twitter because I’m pretty sure I couldn’t take it.

No doubt that lot will be saying right now we haven’t a hope in Paris.  And no doubt this was based on a few highlights from the French victory over Wales last Saturday.

Well I’m here to advise you not to listen to any of that nonsense.  Yes, the French had some decent scores against the Welsh, and they also have a lot of quality through their squad despite Teddy Thomas not being available, especially in the backs with the likes of Dupont, Ntamack and Vakatawa.

But if you watched the full 80 minutes, you’ll see they are as yet far from perfect.  Their discipline wasn’t great, and had Dan Biggar brought his place-kicking boots the scoreline would have been a lot closer.  Also, while they showed exactly what they can do in broken play, they weren’t so hot when it was going in the opposite direction.

And that’s just on their side of the equation.  I won’t have it said that we’re incapable of getting the job done in Paris…

Before I continue, I should probably define what I mean by “the job”.  For me, that’s winning the title.  Assuming England are going to win against Italy, if we don’t get four tries against France we’d have to win by [(England’s winning margin over Italy minus 23) + 1] to be crowned champions.  And assuming England are likely to win big, we’ll probably need 4+ tries anyway, so either way, getting them and winning is “the job”.

...because while we did have some issues last weekend ourselves, there were also a lot of positives to show we’re capable of lifting our game.  And when it comes to our matchday squad, what more of a show of confidence do you want to see than a virtually identical selection bar the replacement of Garry Ringrose.

Robbie Henshaw is more than capable of filling his shoes and it’s not like he hasn’t teamed up with Bundee Aki before, be it in the green of Connacht in a major final or even the green of Ireland at the very same Parisian stadium.  And although I couldn’t see either of them being hauled ashore for anything other than injury for the 80 minutes, should that happen, we have in Chris Farrell a more than capable replacement.

And when it comes to the frailties the French showed last weekend, I reckon we are generally better set to capitalise.  If they ship the same amount of penalties, we seem to have a decent lineout/maul set up in place should we kick for the corner.  And if we get some broken play opportunities, from what we’ve seen of “Farrellball” our players have enough license to take full advantage of the situation like that offload from Peter O’Mahony.

Obviously when it’s French broken play we could well be vulnerable - and yes, I’m sorry, this has a bit to do with Stockdale, but I don’t think we’re expecting him to be everywhere on the pitch at once so it needs to be a team effort.  And the hope is that rather than worry about how we respond to those situations, we manage instead to keep them to a bare minimum.

I’m expecting defences to hold sway on the night.  Unfortunately this will of course make it very difficult to get to the four tries, but I guess what I want is for the lads to at least show us back home they’re going for it.  We might be technically just a few weeks into a “new season”, but whatever month it is, a Six Nations Championship is on the line so it’s definitely one of those “leave it all out on the field” kind of matches and I know this won’t be lost on them.

How do I see it going?  Well the bookies have France by 4 and I can’t blame them.  But imagine this - they lead us 27-23 with 5 minutes to go and we somehow have 3 tries on the board.  We win a penalty around midfield and it gets put to the corner.  We win the lineout, get good crash ball, and now we’re 5m from their line and rolling through the phases…

Maybe I’m a bit too hopeful with my example (not to mention specific) but basically I’m trying to say I believe we can do it.  And as fans we all need to let the lads know we do.  Come on Ireland, let’s win this thing and keep the twitter zombies at bay.  JLP