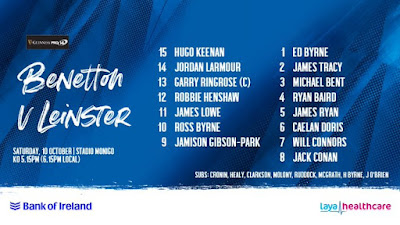 Nobody wants to start a new campaign by coming across both finalists in the first two rounds, especially when that final was only a few weeks ago.

Yet while that task may have been daunting for Benetton back when they joined this league back in 2010, they have meade steady progress throughout that decade to at least reach a point where even the visit to their home patch of a very strong and little-unchanged Leinster team won't stop them from believing they can put in a decent challenge.

There's no doubt they will be the underdogs on Saturday evening, but when you have a strong, settled back three like Ioane, Tavuyara and Hayward, anything is possible and although they were on the losing side at the Kingspan last weekend, they gave the Ulstermen something to think about especially in the first half when they fought back to parity from being 14-0 down.

So it's not like this will be easy by any stretch, but if the evidence of last Friday is anything to go by, this is definitely a Leinster side that can get the job done.  Both my writeup and podcast this week featured Jamison Gibson-Park and while of course that was the highlight for him, being part of the Irish squad was also something of a bonus and he has another chance to show what he can do in Treviso.

And with Ross Byrne having played three quarters last time out, the only real change to the backline is at 12, and with all do respect to Ciaran Frawley, it's quite a change with Robbie Henshaw resuming his dynamic duo with Garry Ringrose, who is gets the captain's armband back.

For this match I will be particularly interested to see how Hugo Keenan plays.  He has done extremely well and looking at that Ireland squad I'm wondering who Andy Farrell has in mind to play at 15 against the Italians.  Hugo's post-lockdown form has been immense and his swap with Larmour might put him in the frame.

In the forwards, Ryan Baird is another who looks like he can move into the fast lane to test level, and who better for him to partner on this quest than James Ryan.  There's a fair bit of beef in that Treviso pack so we'll have our work cut out, and although our unit with the most changes is in the back row, Caelan Doris and Will Connors will be no slouches as they slot in.  There's also a ton of experience on the bench in the likes of Cronin, Healy & Ruddock.

Overall I just want to see a continuation from Round 1.  It's another strong side so we need to be just as clinical.  Lineouts are again an area where we can improve, but I'd be confident they'll have the kinks ironed out by now.

Bookies have us winning by 18!!!  Quite a mark to set for any kind of away trip, and this stadium has been anything but an easy place to go in recent years.  That said, with a two week break to come for the boys in blue they have a good opportunity to leave it all out there so hopefully we'll see that points spread as a challenge and I'll want them to go out and beat it.