Friday night Leinster thrashings are generally forgotten these days, especially when they start weekends that involve a welcome return of a Six Nations Championship Ireland can win.

To be fair, this match did offer a number of side attractions, like the 150th appreance in blue by Dave Kearney, 250th by Devin Toner, and the first in a gagillion years by Dan Leavy.

Still though it was a scoreline that kind of makes you wonder if it's worth watching twice and finding a load of descriptive words for, even if that's kind of your thing as you have a website for just that. Well, I managed it, albeit by simply describing the dozen or so stand out moments one by one in a format I call "try-mline"....

It was all a bit scrappy from both sides for the first 10 minutes, and the visitors were unlucky to lose former blue Ian Nagle before a minute was on the clock.

When Zebre were pinged off their feet in their own half, we had ourselves an attacking lineout in their 22. Rhys Ruddock took a clean dart at 2 from Sheehan, Scott Penny peeled off the maul, Luke McGrath took the offload and got to within 5m of the line, and after a few phases Michael Bent crashed over aided and abetted by Ruddock and Toner.

A try started by O'Briens - first Tommy took a good catch at halfway from a box kick and then Jimmy planted a beauty into touch deep in the Zebre 22 from his own half despite being clobbered for his trouble.

From here, Dan Sheehan was given a gift by his opposite number Marco Manfredi who's dart sailed over the intended receiver's grasp to fall perfectly to Sheehan who could have walked over the line.

As we tried to exit from the restart we were pinged at the breakdown allowing Pescetto to get his side off the mark.

Definitely an incident worthy of inclusion here IMO. Leonard Kumov was on for Nagle and shortly after a Zebre maul the TMO wanted to look at possible contact to the eye area of Ross Molony. The fact was he did seem to be guilty of attempting it and possibly Ross was fortunate he had his eyes closed.

However, watching the full replay it seems like his team mate, ironically another former blue Mick Kearney, accidentally grabs him by the scrum cap, an act which he takes to be Molony going for him around the eyes, which would make his action a form of "retaliation".

I'm not wild about my use of the word "however" back there, and nothing really excuses that kind of behaviour, but it was a unique incident and while he was lucky, I can see how the ref let him away with a warning.

The penalty led to another try from a lineout but this one was very straightforward. Josh Murphy takes the dart from 6, Penny takes it from him and offloads to Sheehan wrapping around him, and the hooker offloads to Dave Kearney trailing him on the inside and he easily breaks through poor tackling to get over the line.

Under immense pressure from the Leinster D following a scrum, Zebre 9 Nicolo Casilio puts his clearance kick out on the full, giving us yet another lineout chance, and again we make the score look way too easy.

One off the top from Molony at 6 this time, McGrath to Frawley and although the crash ball didn't gain too much ground, Tommy O'Brien was already at full tilt on his line to take the pass from McGrath in his stride and nary a Zebre hoof got near to him before his touched down for our bonus point try.

Possibly the worst exit kick in Celtic League history started us on the road to this one. It fell meekly to Tommy O'Brien in wide open space and although it took us 11 phases, each one showed progress and in the end it was Sheehan bagging his second.

I suppose you could call the next ten plus minutes a "purple patch" for Zebre, since we didn't score in that time and the biggest highlight was Dan Leavy joining the action, an awesome sight to see after such a lengthy layoff.

After a few more penalties gave us another close lineout, the move of choice was for Toner to take it at the front, Josh Murphy to ship it on for Frawley who dancde his way towards the line. After a couple of phases it was Josh again and he needed to think quickly to pick up a loose ball at the back of a ruck before crashing over for try number 6.

We were now well into the bench being added to the fray from both sides, and did I say that Zebre exit kick earlier was the worst ever? Well this next one was even worse as it didn't even get out of the 22. It also fell to Tommy O'Brien who set us up with possession but it wasn't long before Ciarán Parker marked his debut with an easy score.

This wasn't the first time Leinster handed out a tonking where the best try of the night came from the tonk-ees. Here it was sub scrum half Renton dinking one ahead to be gathered by sub out half Antonio Rizzi who had the time to look up and plant a second kick ahead to sit up nicely for full back Michaelangelo Biondelli to evade the challenge of Silvester and get the score. It was still symptomatic of the night Michael Bradley's men were having, however, that a conversion was missed that could have taken them into double figures. 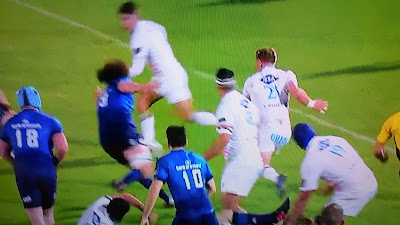 Some suggested the runner was ahead of the kicker for this one? Meh - I think we can give it to them.

That try only angered our finishing XV and after another poor exit kick following the restart, we were back on the attack from our own 10m line. There were good carries from Jimmy O'Brien and Dave Kearney and a sweetly timed offload in the wide channel from Dan Leavy but in the end it was Tommy O'brien with the finish to provide us with the "fifty-burger".

Another lineout led to try number 9, but this wasn't so much a pre planned move as a complete surrender from the Zebre defence. Scott Penny was probably meant to provided crash ball yet he ran straight through untouched (maybe a strong arm fend helped a bit though it might not have been needed) to get under the posts to provided the salted caramel sauce on the cherry on the icing on the cake.

It would have been wonderful to cap off the gave with a Dan Leavy try that could have broken the 70-point barrier, but I for one didn't want this sequence to result in a score. First of all there looked like a Leinster knockout back at halfway before Leavy "soccered" it ahead a couple of times before he pounced on it after scrambling Zebre defenders made a pig's ear of tidying it up. Mercifully the decision was no try.

Notice how I haven't mentioned Harry Byrne once? Well that was by design. His influence was key throughout in open play and as you can see I didn't need to mention our conversions from the nine tries as he nailed them all. As impressed as I was by Dan Sheehan, both our starting halfbacks were always in control and I would have gone for Harry as Player of the Match were it down to me.

But the biggest takeaway from this match was yet another generation of match-ready players coming through the ranks at all positions. Sheehan, the O'Briens, Penny, Milne, Dunne, O'Sullivan; all are names we should be comofrtable seeing in our Pro14 lineups going forward, and towards the end Jimmy Silvester, a late inclusion for David Hawkshaw, demonstrated the kind of competition for places at Leinster these days by his reaction to a grubber kick that didn't quite pay off.

Hopefully he'll appreciate that his disappointment can be spun as a good thing. He'll definitely get more chances down the line to earn his stripes and if that kind of hunger is anything to go by, we have a lot to look forward to as Leinster fans. JLP