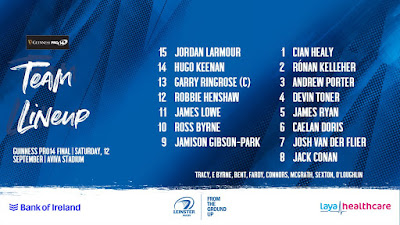 The way we roll here at Harpin Manor these days for Leinster & Ireland matches is that we deal with the opposition earlier in the week, usually by having a fan (in this case Ian Frizzell) on the podcast to talk about their side of things.

So while this preview will focus on how the match looks through blue goggles, I have to start with the Ulster matchday 23. It's great to see Iain Henderson back playing rugby, interesting to see Stockdale moved back to the wing and eye-brow raising (if not completely a shock given form) to see Mathewson starting at 9.

But it's the Ulster bench that leapt off the page. After that amazing final quarter against Edinburgh last weekend, should they need similar "finisher" production in the final they will now be relying on all of SIX out of 8 former boys in blue. Add the fact that they've gone for a 6 forwards/8 backs split and it looks like they're prepping to battle right to the end.

Anyway...back to our lot. The "Sexton not starting" thing was flagged early in the week, and a few journalists tried to make some parochial hay out of it, but in all reality, given our hectic schedule it's not that surprising. Besides, anyone who doubts the ability of Ross Byrne to control a final won't have seen him play. It's true, he might have been a shade below par against these same Ulstermen last time out, but given the stakes on Saturday, not to mention the guy he knows is waiting in the wings, he has every incentive to up his game.

And let's not forget Jamison Gibson-Park at 9. Luke McGrath is still our presumptive starter as far as I'm concerned, but JGP has always been nipping at his heels and we're bound to get a decent outing from our halfback pairing.

Meanwhile in the back three, it's great to see the coaches keep faith with the trio from the semifinal as their display, particularly under a relentless aerial bombardment, went a long way towards getting us into this final. It is of course especially a big show of faith in Hugo Keenan given the experienced performers that could have replaced him.

In the centre, despite all the talent coming through the ranks, Henshaw/Ringrose will pick itself and with Sexton on the bench it's good to see Garry get more of a leadership role. I wonder if the coaching staff might be keen to use Rory O'Loughlin earlier to half one of the pair rest ahead of the following weekend.

And speaking of leadership roles, let's move into the pack shall we. We also have an international lock returning to our ranks and I'm ecstatic to see big James Ryan back in blue. When his operation was first reported I assumed he was out at least until the start of "next" season but maybe Jamie Heaslip is giving Wolverine blood transfusions up at UCD these days?

He'll form a great engine room duo alongside Big Dev who called a slick lineout last week and with Scott Fardy surely chomping at the bit to come on and put on some poor form (by his lofty standards) behind him, we should have more than a match for Hendo's return.

With Tadhg Furlong unavailable, I can have no complaints with our two front rows. Ulster's trio have also been doing well so this could be a key battle on the day, though superior experience on big matchdays may prove key.

Last, but certainly not least, we have the back row. As always it's all about what players Leinster were going to leave out, but I like that they've done with this combination. Will Connors would probably chop tackle himself into the ground if you let him and after successive chart-topping displays he deserves a break on the bench. JVDF certainly will be well rested having had about 5 seconds on the pitch last time out!

Tactics-wise, from Leinster's side of things we of course have to be strong in the areas we know Ulster will try to hit us. Strong carries from McCloskey, Hume and Coetzee. Darts up the wing by Lyttle and Stockdale. Another general thing we have to do is to put the Saracens quarterfinal completely out of our minds, although in fairness Ulster also have a date with Toulouse to forget.

And critically I reckon, we need to minimize the number of penalties from our tryline all the way to their 10m line. Both of their hookers showed how devastating their close mauls can be and we will be heavily punished if we don't get on the right side of Andew Brace as early as possible.

The bookies are going for an 11 point margin. I do think we'll win, but not by that much. Hopefully there won't be any controversial decisions to ponder but I can see this Ulster 23 making a really good fight of this one (much like they did in that Champions Cup QF which feels like it was decades ago) so I'm going for a similar margin, 4-6 points, though possibly with it only getting that close towards the very end.

Here's to a final that's worthy of the Pro 14. Some critics from other shores were saying during the week that Sexton's ommission was a "bad look for the league". I would have thought 14 of the last 20 finallists being Irish provinces was a much worse look for a league spanning 4/5 nations, so maybe they should get their act together. Meanwhile, we get to enjoy another interpro showdown! JLP