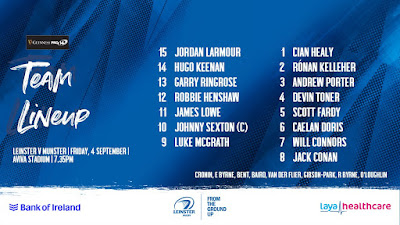 I could end the preview there and you’d have all you need to appreciate what’s at stake.  But maybe I’ll still harp on it just a little further just in case.

For Munster’s side of the equation I’ll refer you back to my podcast chat with Michelle Tobin earlier in the week - their lineup is pretty much as she predicted.  Needless to say by the time it comes to matchday I have the Leinster goggles firmly locked and loaded, so let’s have a look at the boys in blue shall we.

The name Hugo Keenan leaps off the page and gives you a slap.  And I have a funny feeling that’s what he’s planning to do to the ball every time we have a restart.  We used him for this quite a bit against Ulster and my hot take is that this is something he’s been showing a knack for in training as well.

On the other wing, there’s James Lowe.  Although he did find the scoresheet a fortnight ago, he was relatively quiet the rest of the match, as well as having a defensive lapse or two.  For all the attacking production we’ll be expecting from our wingers this evening, it could be how they handle the likes of Earls and Conway running at them which could prove more significant.

Staying in the back three, it would have been the easiest decision in the world to go with Rob Kearney at 15 but Leo, Stuart & co have shown faith in Jordan Larmour instead - a good chance to prove himself on a big occasion as well as a timely one with Jacob Sotckdale’s display last week being one of Ulster’s few positive takeaways.

Whatever about the form of the two sides, they are well matched pretty much all over the park, but on paper the one place where Leinster could have a slight edge is in the front row and if this is true, we will really need to make it count.  Jack Conan will be keen to match his opposite number for barraging runs from the base of the scrum but the fact remains we’ll be far better served by winning penalties at this set piece and, of course, also winning the ensuing lineout should we go that way.

Last time out against Munster we went for a 6/2 split on the bench which makes sense because these contests always seem to end up as a back row battle.  We’ve gone for the more conventional 5/3 this time around, but I wonder if that is more about making sure we’re covered in the backline having had Jamison Gibson Park on the wing a fortnight ago.  If we plan, say, for our locks Toner and Fardy to play a full 80 minutes, we could use both Ryan Baird and Josh van der Flier as extra back rows anyway (or Fardy to 6 and Baird to 5).  Again, this is nothing but speculation on my part.

Returning to the back line, of course our 9/10 combo is going to play a pivotal role in our success on the night but I can’t see beyond the 12/13 matchup being the one that decides this contest.  Personally I don’t think Chris Farrell was man of the match last time around.  It’s not that he played badly, rather his stand out moments couldn’t be taken without noting more than one occasion where his opposite number smoked him.  I’ve said already on these pages I reckon Stander could have easily added to his vast collection of gongs.

But when it comes to playing in the centre, especially in contemporary Irish rugby, it’s more about the pairing than the individual.  No doubt the Henshaw/Ringrose duo are well used to each other but since this is the third week in a row of de Allende playing alongside Farrell, there’s every reason to expect them to match our lads in every category.

The first half an hour in any match is crucial, more so when it’s a winner-takes-all encounter, and even more so when it’s these two.  I expect Munster to be well-drilled, well-focused, and well-able to execute their game plan to win all the early battles.  What will prove decisive is how we respond.  If we can find the right balance between aggression and tempting cards out of Andrew Brace’s pocket early enough, we should be able to just about keep the winning streak going.

I didn’t like the bookies’ spread of 9 points in our favour last time, and I don’t like the 8 this time either.  I think we do have it in us to win comfortably (especially if the Tacking Machine That Is Will Connors is in full flow), but the nature of this contest could prove to be a leveller so my prediction is going to be the same as last time, between 4 and 6 points to Leinster.