"Rhodes is alleged to have committed an act of foul play in that he struck the Leinster centre, Robbie Henshaw (No 12), with his head"
Saracens flanker Mike Rhodes cited for headbutting in Leinster victory
SkySports.com 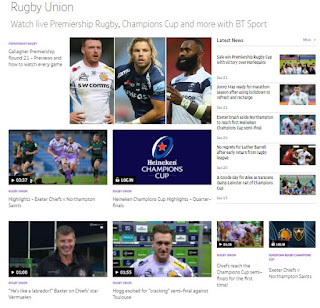 Note - as of 12pm Tuesday there was no word on BT Sport's main rugby union page about the Rhodes citing, despite there being news which happened since it was announced (like Sale's win over Harlequins).
Ireland will...(be) taking on the Italians at Donnybrook's Energia Park on October 25 before travelling to Lille to face the French a week later on November 1.
Ireland women's team to play out final Six Nations fixtures with two Sunday games
Ruaidhri O'Connor - Irish Independent
"In my time at Ulster, we're the closest we've ever been to the coaches."
Captain Iain Henderson says there is much work still to be done
BBC Rugby
Leading the way with their all too familiar driving maul, Folau Fainga’a scored the decisive opening try, which was followed by two more.
ACT Brumbies win Super Rugby Australia, over Queensland Reds
Scott Hornell - Last Word On Rugby
The 26-year-old Tullamore native scored 30 tries in 28 games
Jordan Conroy named in Sevens Dream Team after sensational season
The42.ie
Feel free to share any interesting links you spot yourself about t’internet by email, Twitter, Facebook, blog comment or carrier pigeon – whatever works for you. JLP
Note - views expressed in "Front Five" links do not necessarily reflect those of HarpinOnRugby
at September 22, 2020