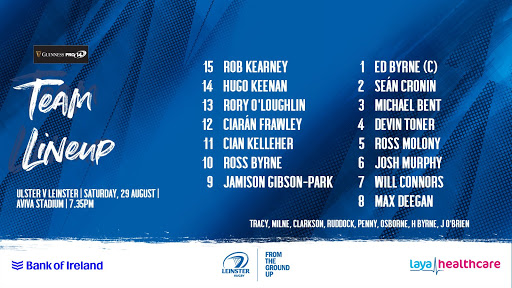 Even with nothing to play for on the league table, the pretty much 360-rotation in the lineup means there will be a lot of Leinster hands waiting to be help up on Saturday evening at the Aviva, and a 22-match winning streak (though I prefer to focus on the 20 from this overall campaign) can also help to focus the mind.  Toss in an Ulster team which, despite also making changes, will be very keen to put last Sunday behind them and this could be an interesting battle.

Definitely the most eye-catching name is that of Rob Kearney - great to see him back although looking to Ireland’s future it would have been interesting to see Jordan Larmour squaring off against Jacob Stockdale.  Rob’s in an unusual Leinster back three combo with Hugo Keenan and Cian Kelleher.

Speaking of the future, it looks like Ciaran Frawley’s may lie in our centre as he lines out at 12 alongside Rory O’Loughlin.  With Harry Byrne on the bench to back up his brother at out half, this may not be a bad move for Frawley and he definitely seems to have the talent to succeed in that role.  All told it’s very much an experimental back line for us so how they gel could go a long way to deciding how this match goes.

Up front it's also a complete change although the combinations still look a lot more familiar.  Big Dev Toner was very influential against Munster from the bench and will no doubt be keen to tidy things up at our lineout after things were a bit haphazard.  Overall the leadership role goes to Ed Byrne skippering Leinster for the first time, always good to see the “loosies” getting some leadership!

The back row one armed bandit has thrown up Josh Murphy, Will Connors and Max Deegan this week, with young Scott Penny on a more conventional 5/3 bench.  Will be relying heavily on Connors’ pilfering prowess as well as Deegan’s tendency to find his way on the scoresheet.

Also on our bench ready to make his Leinster debut is Tom Clarkson - I hope I’m not putting too much pressure on him when I point out that we let go two tighthead prospects over the COVID break, and actually one of them scored against Ulster only last Saturday, so it will be interesting to see how Tom gets on.

On Ulster’s side of things, although they are also safely in the final four, Dan McFarland’s “sofa” remarks following their defeat to Connacht will definitely be resonating throughout the dressing room, and I’m fully expecting them to be motivated to get at us from the kickoff.  They have a few significant names making a second start in a row like Stockdale, McCloskey, Jordi and Cooney, but naturally all Leinster eyes would have been drawn to the name of Ian Madigan lining out at 10.

Ever since he left I assumed the rugby gods would have found a way to have him lining up against us before now, and it goes without saying that we wish him all the best and I have a funny feeling he won’t exactly be shying away from matching up against Ross Byrne for this match.  With the powering runs of McCloskey at his disposal there’s bound to be loads of chances for him to create space with what I call his exocet missile of a long pass.

Wallaby Sam Carter is an interesting choice of skipper for the Ulstermen and he lines up alongside Kieran Treadwell in their second row.  The Ulster fans I have spoken to during the week (namely Ian Frizzell in our podcast and Nigel Quigley in an Interpro panel on Facebook) suggest their props O’Sullivan and O’Toole did well in the second half against Connacht so they get their chance from the start on Saturday.

The bookies make this “too close to call”, throwing Leinster the nod by 1 point.  Fingers crossed the penalty count will remain relatively low same as last weekend, though with a different man in the middle, namely George Clancy, we'll have to wait and see how the laws are interpreted.

I agree it could be close and expect an opening spell very similar to that we had against Munster with the gauntlet thrown down in the early stages and it being left to us to pick it up.  I reckon we will manage it and possibly stretch a lead late on to run our winners by 6-8pts.

Obviously the most important thing for both sides is to get through with good performances and not too many injuries, especially as it’s not completely outside the realm of possibility that they could be facing each other again in the final a fortnight later!  Here’s to another great interpro contest, do join me on the Twitter machine during and on Facebook afterwards to share your own thoughts!  JLP