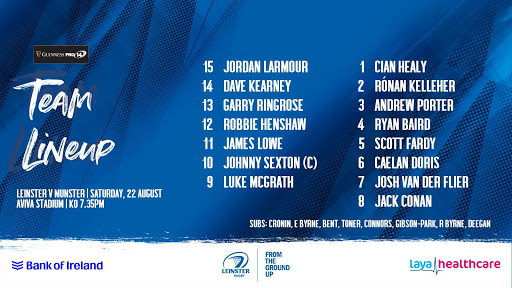 I mean this with all due respect...never have I looked forward to a rugby match between two Italian teams than I have today.

The Super Rugby watching was mostly great, the Premiership starting last week was mostly, er, a bit less great but still good, but now we're going to see Pro14 logos on the jerseys of players taking part in a live match which means we're that much closer to Saturday night's humongous meeting of these two virtually full strength lineups.

OK, before I go on, I must satisfy the rugby gods' need for superstitious caveats, so consider this paragraph to be my covering all the bases when it comes to the numerous things that could possibly happen between now and kickoff!!!

Right - now, to the lineups.  Well, the standout selection for me was in the Leinster second row.  Intentional or not, it sends a well deserved nod in the direction of both Scott Fardy and Ryan Baird for their memorable display in our last outing against Glasgow about a thousand years ago.  On a night where hardly anything is going to look normal, this little bit of continuity is much appreciated, and they'll be more than a test for the likes of RG Snyman.

They're the engine room of a very strong pack and even though Tadhg Furlong gets an extra weekend's break, it's still quite a formidable front row and what an occasion for Ronán Kelleher to try to get back to where his amazing rookie season had left off.

But it's in the back row where this gets really interesting.  Two weeks ago on the podcast I went through Leinster's options with Conor Cronin and as always we were at 6s at 7s coming up with a 6, 7 and 8 but this combo is as good as any, and it's great to see Jack Conan back in the mix to create even more selection headaches.

Then I had Munster fan Michelle Tobin on the pod this week to look at their back row choices, and you know what, Mr van Graan doesn't have much of an easy choice either!  You certainly couldn't argue with POM, TOD & CJS starting and Cloete will always make an impact off the bench, but you can be sure when Jack O'Donoghue returns from the HIA protocols he'll have a part to play.

It looks like Leinster have taken more preparations for a back row battle.  Not only did Leo & co go for a 6/2 split on the bench, we can actually switch from Doris/JVDF/Conan to Fardy/Connors/Deegan with only one of them required to play a full 80 minutes.  This should make for a breakdown battle royale right from the kickoff.

Now to the backs...Munster have had terrible luck at 10 but JJ and Murray are a strong pairing to go up against Sexton & McGrath.  As always in these fixtures we'll be looking to the Leinster skipper to keep a cool head - there's no reason to believe anyone will be holding back no matter how long the break has been!

Then we have the centres.  Munster have a Sprongbok addition here too and in de Allende/Chris Farrell they have a very strong duo.    We're not too shabby in this area either though, and it will be interesting to see how Messrs Henshaw & Ringrose are deployed throughout the match, both with and without the ball, because this could be a key factor.

Speaking of key factors, James Lowe.  He's playing.  That's all you really need to say, but I will add that from the moment he arrived at Leinster he was ready to play in matches like this.  I'm delighted also to see Dave Kearney starting as he also shone in that last match against Glasgow with a hat-trick.  I'm not sure if there will be much space for these two back threes to exploit, but if there is, there's plenty of talent there to do it.

We never want to have to mind the referee too much, but there have been a rake of penalties called in all the different tournament which have already restarted so I expect no exception here, particularly with the extra amount of passion this fixture brings to the surface.  If there are a plethora of pings, I wonder how keen Andrew Brace will be to send players to the bin.

The bookies say Leinster will win by 9.  Obviously I'd take that, but I reckon it's going to be much closer.  Taking the derby aspect out of it for a moment, Munster need a result more and I fully expect them to keep us on our toes for the full 80 minutes.  I still think we'll win, mind you, only by smaller margin, probably 4-6pts, with the lead changing hands a few times.

Here's to a great return to interpro rugby.  I've no doubt the boys in blue and red will give their all and while it's a shame we all must watch at home, I think I speak for all of us in saying we'll take for the time being!  JLP